MST3K’s Hampton Yount on the show’s revival and live tour, which hits the Midland Thursday 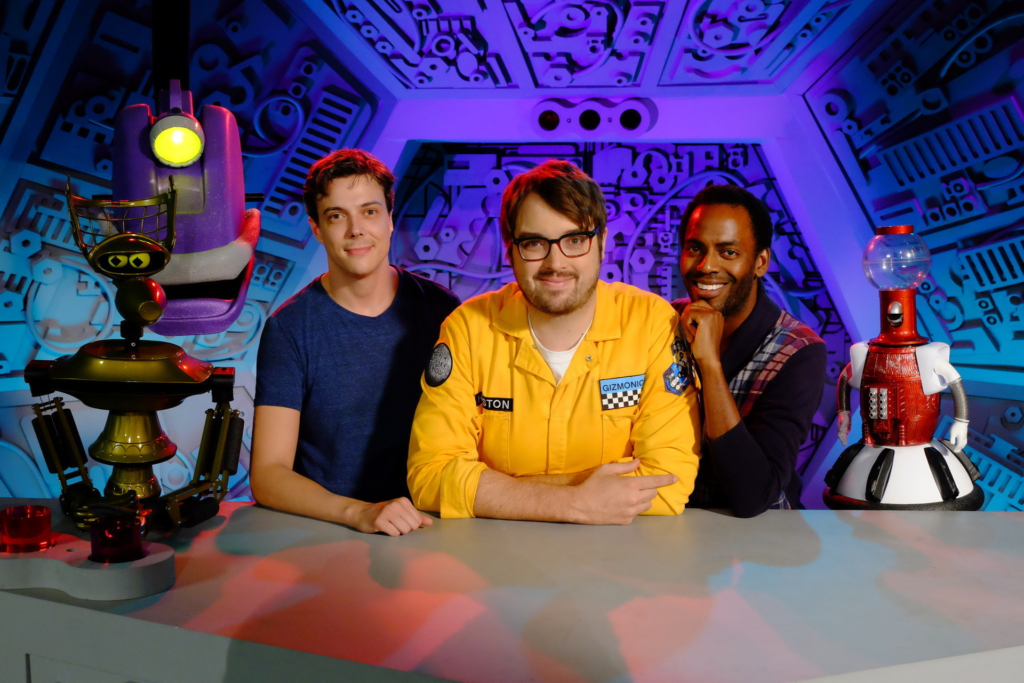 After breaking the Kickstarter record for the highest amount ever given to a video project, the long-rumored Mystery Science Theater 3000 revival came to Netflix earlier this year. The show — in which a hapless human is forced by mad scientists to watch the worst cheesy movies on the planet — brought back the human’s robot pals on the Satellite of Love, but gave them new voices. Alongside Baron Vaughn as Tom Servo is Crow T. Robot, played by Hampton Yount. Together, they befriend and help maintain the sanity of the new experimental victim, played by fellow comedian Jonah Ray.

The show’s 14-episode return was so successful that the folks behind MST3K are taking the show on the road for the first time, revisiting one of the series’ most popular films, the 1962 caveman-meets-teenagers picture Eegah! It’s a massive undertaking, and I spoke by phone with Yount about taking over the role of Crow, preparing to puppeteer live, and his history with the show.

The Pitch: When did you come into the MST3K revival process?

Hampton Yount: I guess pretty early on. Joel [Hodgson, MST3K creator] had his own designs that he’d been working on, just to figure out if he could bring the show back or get the rights back — just how he would do it — kind of mulling that over, personally for two or three years. He met Jonah [Ray] and then Jonah brought me and Baron [Vaughn] on board at the same time, but that was probably five years after

“Can we bring this back?” on Joel’s part.

I literally just finished the new season – I’ve been trying to make it last.

A lot of people are doing that. I haven’t even finished it, myself, because it’s just so hard to watch myself. I have barely even watched my own stand-up that’s been on television [laughs]. It’s hard for me to watch.

That seems to be the way pretty much anyone who puts out something creatively responds to their own work.

Yeah: “I’ve done so much better!” Immediately. If it’s a week later – say, in stand-up – I’m like, “I’m better than I was a week ago.” There’s no way of stopping progression.

From what I’ve read, it seems like the MST3K revival had a pretty tight shooting schedule. Was it particularly stressful or did it help you focus?

It was pretty tight, but I don’t really have a wide frame of reference as far as the acting side stuff. Like, I’ve worked in writing a lot, but with this, it felt like it was a really tight schedule, because at the very beginning, we didn’t really now how it was scheduled – how it would flow or how it would go, or how fast we could knock stuff out, you know?

The first day was a 14-hour day of audio records, and we were just like, “Okay, no. We can’t do that again.” You plan for three episodes in one day and our voices are shot, so we’ve gotta beat this out a little bit more. When it came to the actual shooting, that was a little bit tighter, because then a whole crew is involved of 30 people, so you can’t delay.

On the shoots, actually, I got sick – like, stomach ill – one day. Leaning against a ladder for most of a day, and they’re like, “You’ve gotta go home!” and I’m like, [woozily] “What are you gonna do? How will you take care of this?” They just had me do pick-ups for my audio later, so it actually worked out, but it was such a tight schedule no one felt like they could get sick or, you know, leave. All hands on deck, you know?

Looking at the things you’ve written on before, like The Eric Andre Show and so forth, it seems like the really conceptual shows you’ve been a part of make you really well-suited for MST3K.

As much work as it is, it’s also like, the most fun job, because it’s a childhood love. I love bad movies. I love making jokes. I also love writing with my friends, so it’s all of these beautiful, great experiences. Then, you also want to work really hard to make sure it all comes together right.

Is there a bit more pressure in terms of a legacy property such as this?

Yeah? I don’t think it ever really set in until after we’d done it. I mean, every time I saw a Crow puppet for the first couple times, I’d take photos and be like, “Oh my God – this is happening!” but it’s more like a joy, because you’re like, “This is so great!” The Kickstarter let me know that this was very important to a lot of people.

As much as this is important to me, I can’t speak as to how it affects other people’s lives, even though it’s just a show and you should really just relax [laughs]. Some people have gotten arm tattoos. I don’t want to embarrass the guy with the arm tattoo.

Did you have to learn puppeteering for this role?

Actually, I’m about to really start learning it more so. I would work the mouth and do the voice for the puppet, but we had puppeteers who helped us out who are very experienced. They gave a lot of nuance to it. We had such a tight schedule that Joel was worried: “You’re starting at like, zero, whereas everyone who did the original show had years to get good.”

With 22-episode seasons, and you’re cherry-picking memories, so your memories of how the robots moved and interacted can be kind of warped, because I’ve watched the older seasons, and some of the movements are not really there in the beginning. Over time, they added little bits of subtlety, in terms of how their eyes would move or their body would shake and move during conversations.

For the live tour, I’m going to be learning how to move [a puppet] for the show. I don’t know if I can fully sign off on it [laughs]. I’ve never been part of something that’s such a production. It feels like theater. It feels like Cirque du Soleil, you know? A lot of moving parts.

Being as how this is a live show, do you see it changing as it goes along?

We can see how it goes and we can drop jokes, we can add jokes. What I will say that’s kind of interesting is that, when we did screenings of the new episodes – with the show, there’s such a vibe to each episode. You kind of start locking into, like, every third joke, and you’re laughing over other stuff, and maybe not hearing everything. In a full theater, you’d maybe hit one joke and completely miss the one right after.

But, in another city, that first joke might not get as big a laugh, and then the next joke would, so it would just be a different vibe. So, we definitely want to give every joke a decent chance, but if this thing is not working, we’ll switch it. If it’s a dud we’ll drop it.

Mystery Science Theater 3000 Live on Tour hits the Midland on Thursday, August 3. You can find more details on the show here.