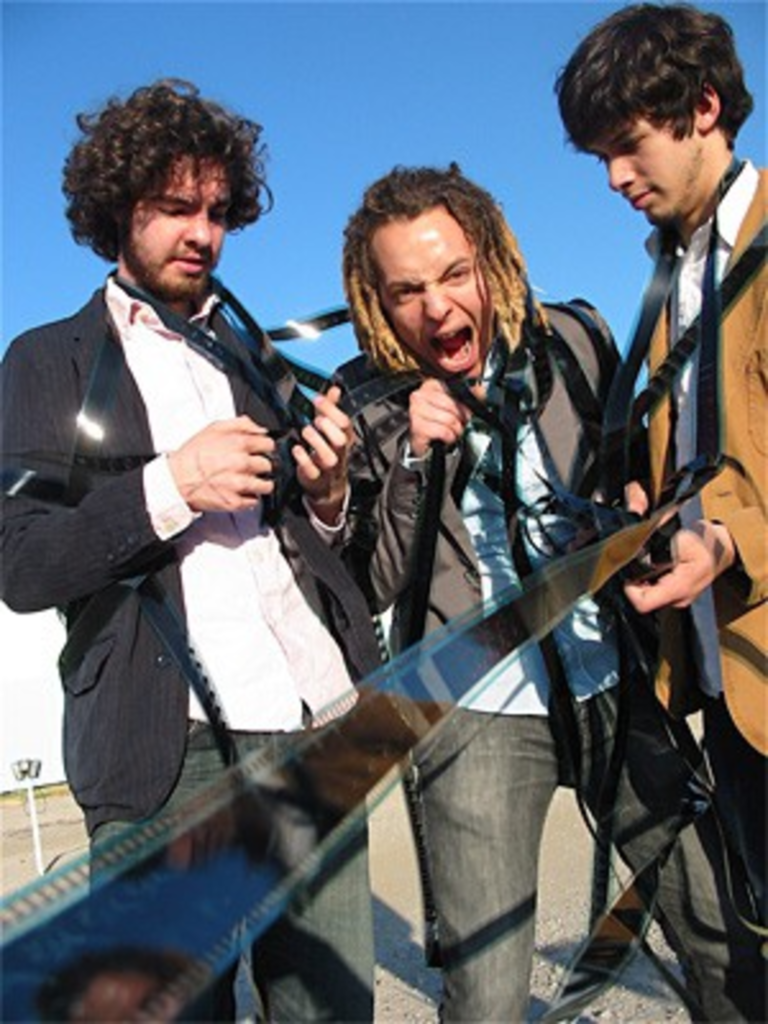 Since age 6, Enrique Chi has carried out his daily chores in both Spanish and English. He has made great strides with the latter.

“When I moved here, I knew how to say water and knucklehead,” recalls Chi, whose family relocated to Kansas City from Panama.

Eighteen years later, Chi still occasionally finds himself at the mercy of his second language. One such faux pas marred his first encounter with Jim Suptic of the Kansas City band Blackpool Lights.

“I accidentally called him ‘Septic,'” Chi says. “He was like, ‘Septic is where you shit. My name is Jim Suptic.'”

In time, Chi earned the esteem of Suptic and the extended Curb Appeal Records family. His gig as the local label’s manager grants him an inside view of the day-to-day foibles of the modern music industry — a labyrinth he’s now wading through with his upstart band, Making Movies.

“It’s always been my dream to make records and put them out myself — to control my own fate,” Chi says. “At the same time, is there any value left in it when bands like Radiohead are completely dismissing the old way of doing things?”

If the proverbial writing is on the wall, Chi isn’t intimidated. He has enlisted Matt Pryor of the New Amsterdams to produce Making Movies’ debut LP, much of which has already been tracked at Black Lodge Studios.

“He’s helped me whittle the songs down and pick out the best parts,” Chi says. “I get stuck, and I can’t even tell if a song is good anymore because I’ve played it so many times.”

The forthcoming album will succeed A Surgeon’s Melody, an EP that Chi recorded last year with his brother, Diego (the group’s bassist and keyboardist), and drummer John Floyd, who has since been replaced by Brendan Culp. That five-song collection — free for download at Makingmoviesband.com — showcases Chi’s aptitude for concisely arranged rock tunes with dynamic changes and go-for-broke hooks.

“Ideally, I want to write pop songs with good musicianship and cool grooves,” Chi says, citing the Police as a primary inspiration. “We want to throw in a Latin backbeat without making salsa records. Growing up listening to Santana probably helped that.”

Chi’s father, Enrique Sr. — who played guitar in early incarnations of Making Movies — also made sure that his sons were well acquainted with groups such as Steely Dan, Dire Straits and Yes.

“He was planning on a music career, and then my mom got pregnant,” Chi says. “He taught us good rock-and-roll songwriting, as opposed to sounding trendy. We didn’t just pick up on what was cool.”

Listening to Latin rock bands such as Soda Stereo and Café Tacuba inspired Chi to write bilingual lyrics. Making Movies’ performances typically feature two or three songs in Spanish, and the group plans to release a Spanish-language version of its upcoming album.

“If you’re singing in Spanish, people seem to pay attention to the rhythms more,” Chi says. “They definitely get a bit groovier.”

Though the current lineup gelled about a year ago, Making Movies has performed only a handful of shows in 2007. Part of the reason is that Chi is skeptical about the potential for building a fanbase in Kansas City — a doubt that he blames on his experiences working with Vedera (as a publicist) and Blackpool Lights (as the manager of Curb Appeal).

“These bands are doing legitimate things on a national scale, but when they play a show here, they draw 150 people,” he says. “If any local band draws more than 300 kids, I haven’t seen it. I’m not going to spin my wheels trying to do something that’s impossible.”

Chi cites Denver as a model for what he’d like to see happen here: a whole city getting behind its best bands and elevating them to a national stage — e.g., the Fray and Meese. One obstacle to such an effort, he says, is the lack of a high-quality all-ages venue in Kansas City.

“No 25-year-old wants to walk into El Torreon or Main Street Café,” he says. “At the same time, a lot of the most fervent music fans are 16, and they can’t get into the Hurricane or the Record Bar.”

The steps that Chi takes toward achieving his goals will likely be informed by an experience he had with his previous band, Sevenfold Tomorrow. As the winners of the “Next Big Thing” contest on KRBZ 96.5, the group was promised a contract with Universal Records.

“The second we got it, we realized it was the worst of the worst: ‘We’ll pay to record one song, and if we like it, we can pay to own the rest of your life,'” Chi recalls. “We showed it to three local music lawyers, and they all said, ‘Don’t sign it.’ Life went back to normal pretty quick.”