Ms. Rockwell gets her diary back 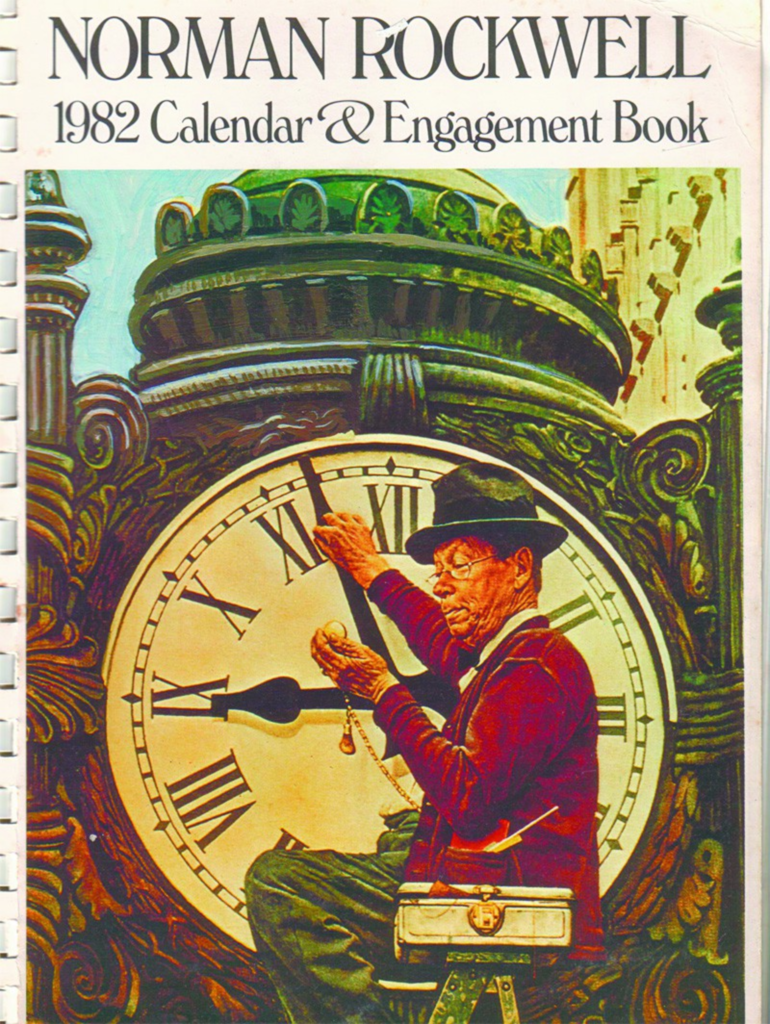 For a moment, she wasn’t sure. Stepping into a Johnson County Houlihan’s for lunch with the Pitch writer who spent 2009 publicly invading her privacy, the woman we’ve come to call Ms. Rockwell crinkled her face with uncertainty. What did this guy look like? Why hadn’t he promised to wear a flower or something?

But then she laughed. Of course — he’s the only one in the place holding her 1982 diary.

That Norman Rockwell datebook, discovered at a Troost thrift shop, has given Pitch readers a glimpse of a world now lost to us: the Kansas City of 1982. Just out of college, Ms. Rockwell toiled in human resources and as a banquet server at the Alameda Plaza Hotel, ate at Taco Via and the Pam Pam Room, dated sporadically, jogged relentlessly, and visited QuikTrip for snacks for which she would later chide herself. All of this she noted day by day in that journal, and all of this your Crap Archivist reported: every drink with sorority friends at Charlie Hooper’s, every trip to Ranch Mart or Valley View shopping center for a movie (including E.T. and An Officer and a Gentleman).

For all the nostalgia, though, what mattered most was Ms. Rockwell herself. Her short entries — recordings of events rather than feelings — have the power, across the years, to stir real emotion. There she was, a young single woman, worried about her weight, worn out by her first full-time job and a prickly relationship with a prank-playing roommate, muddling through the year when all her friends started getting engaged. Our Ms. Rockwell came off as lonely but also good-hearted. She often wrote of her love for her parents, and the meanest words she managed to set down involved the funny-looking glasses of one suitor whom she deemed unacceptable (but only after giving him more than a fair chance).

Reading and rereading the diary — and writing about it for this page over the course of 2009 — I had come to worry about her.

I shouldn’t have. Pushing 50 and foxy, Ms. Rockwell is an accomplished grown-up who gushes about her kids at every opportunity. I return the datebook to her, and she pages through it eagerly, puzzling over forgotten names but also marveling at how many of them are still her close friends. Did ironing, she reads. The pages flutter. Tupperware party. “Of all the diaries for you to find, I guess this is the least embarrassing,” she says and laughs. “It wasn’t an exciting year. Now, if you had found the Hershey’s Chocolate one from 1984 … “

She shakes her head and explains no further. If I had found that one, I would have called her “Ms. Hershey.”

Later journals, she says, would certainly have had more star power. In 1984, she met Michael Jackson at the Alameda and scored free Victory Tour tickets from his brother Randy or the family’s bodyguard, whom she insists was Marlon Brando’s son. She kept Michael Jackson’s pillowcases but chucked them after she got married. She lucked into another impressive celebrity keepsake in Neil Diamond’s trash, where the singer had tossed a sketch he had drawn of his room’s Plaza view.

Most stories that hotel employees tell about famous people are lurid and unflattering. Leave it to Ms. Rockwell to see the world a little differently.

“If Neil Diamond brought a woman up, I would have assumed it was his cousin,” she says. “I was naïve.” She applies this not only to what might transpire inside Neil Dimaond’s suite but also to herself. “The expectations for women back then were so different than they are today. I had that job until I found somebody to marry.” That happened, eventually: a bartender at the Alameda. “I thought you found someone, fell in love and lived happily ever after behind a picket fence. I didn’t realize life was going to have so many trials.”

I wondered: trials worse than handling hotel payroll, which she complained about through the last half of ’82? Or suffering the silent treatment from BB (that roommate)?

She talked about her marriage and her recent divorce. (One of the results of the divorce was her old journals ending up at a thrift store; she says she’s not the one who donated that box.) And she says no matter what pains she has endured over the past quarter-century, she would change nothing because she so loves her kids. We laugh at how her kids would never dream of getting hitched as young as she did and then at how the kids of today are tomorrow’s adults. In 1982, Ms. Rockwell bought an early Walkman at Dolgin’s, but today she has no interest in her daughter’s iPod.

As lunch winds down, we discuss the lost Kansas City of her journal. She grew up shopping the Plaza and swimming at the Indian Hills Country Club. She still loves both, but one has changed.

“The Alameda’s gone, and that’s sad,” she says. “It was unique, run by a wonderful family, and the Pam Pam had the best food in Kansas City. There’s never going to be another like it. It’s like the Plaza, now, in some ways. It’s all chains. The Plaza used to have a bowling alley and a five-and-ten.”

Ms. Rockwell no longer keeps a journal. If she did, she would often note the following restaurants: Grand Street Café, Aixois, Il Centro, Avenues … and McDonald’s. She would no longer record her weight in the margins. These days, she steps on a scale only at the doctor’s office. Her diary would remain touchingly earnest on the subject of family. It would reveal that she still goes to QuikTrip every single day. It would show that cities and people change, but the best things about both are lasting.