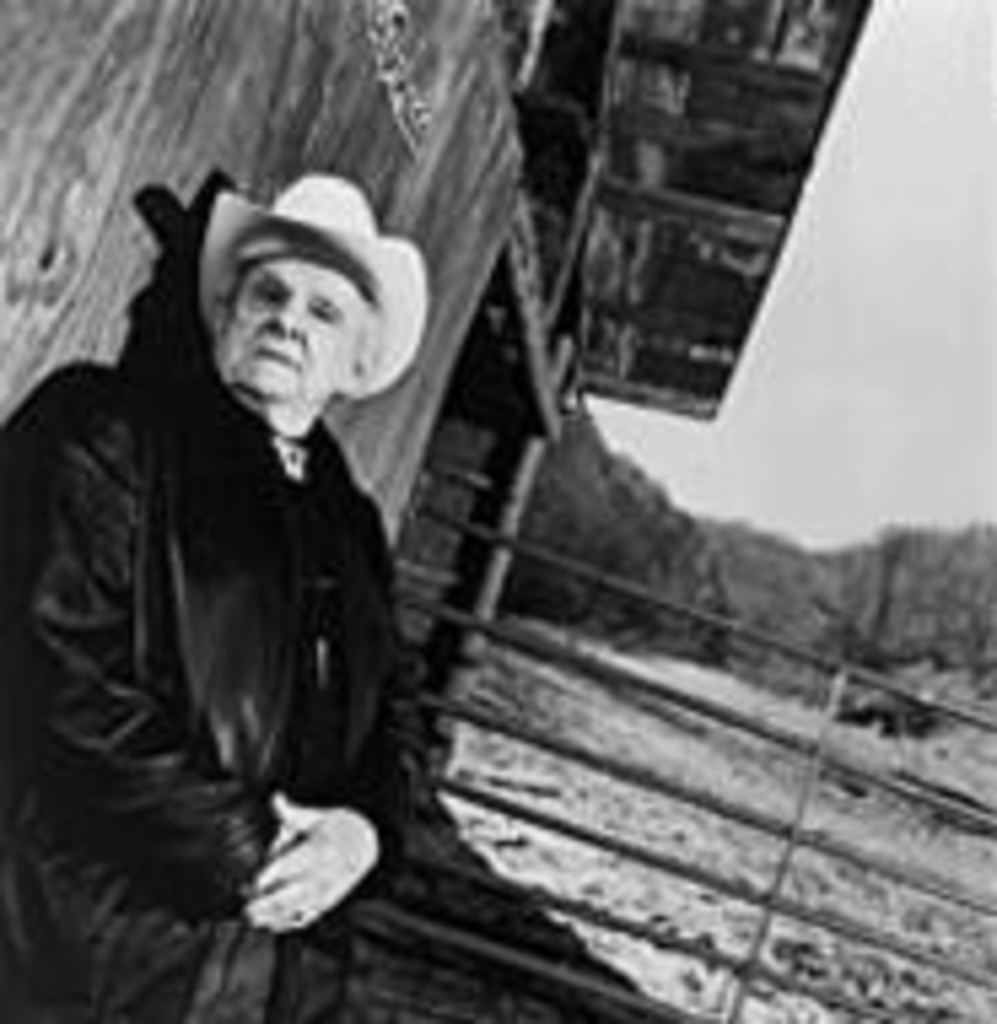 The symmetry is perfect — so poetic it could’ve been scripted. In July 1927, the Carter Family headed down from its mountain to record for the first time. In the rear- view mirror of its borrowed Model-A Ford was Poor Valley, the rugged stretch of Virginia the group would later immortalize in “My Clinch Mountain Home.” Ahead, barely fifteen miles away as the crow flies but a full day’s drive on steep and winding roads, was the bustling Virginia/Tennessee border town of Bristol.

There, the Carters had a date with Kansas City-born Ralph Peer, an ambitious artist-and-repertoire man for New York’s Victor Talking Machine Company. As it turned out, they had a date with history, too. Peer’s Carter Family recordings, along with sides he cut for Ernest Stoneman, Blind Alfred Reed, Jimmie Rodgers and others, are now recalled as the Bristol Sessions, an event routinely billed (albeit somewhat erroneously) as the birth of modern country music.

How fitting, as we celebrate the 75th anniversary of those fabled sessions, that the Down From the Mountain show is barnstorming America. The bluegrass and old-time-music revue, which stops at Starlight Theatre on Tuesday, August 13, is hosted by Rodney Crowell and features such notable country performers as Patty Loveless, Ricky Skaggs, the Del McCoury Band, Emmylou Harris, and Alison Krauss and Union Station. The real star of the show, though, is recent Grammy-winner Ralph Stanley, himself a native of the Clinch Mountains. In fact, Stanley was born just thirty miles north of the Carters’ old home place — exactly 75 years ago.

Country music, more than other commercial genres, has always been deeply attached to its past. Lately, devotees have had even more reason to look back. The Down From the Mountain tour is, after all, merely one byproduct of the O Brother, Where Art Thou? phenomenon. The Coen brothers’ winking, Southern rendering of Homer’s The Odyssey was only modestly successful in theaters. Yet the movie’s soundtrack — composed primarily of Depression-era blues, African-American gospel, chain-gang chants and lots and lots of bluegrass — has sold six million copies.

Indeed, O Brother is now shorthand for something of an old-time-music revival — one that’s been predictably ignored by mainstream country radio but that’s evident enough if you frequent any book, music or video chain store. There’s Songcatcher, a movie about a folklorist who ventures up the mountain in search of what bluegrass patriarch Bill Monroe would later term (rather disingenuously, as far as his own music was concerned) “the ancient tones.” There’s also Songcatcher, an album of contemporary recordings inspired by the film. Mark Zwonitzer’s Will You Miss Me When I’m Gone?, a lively new biography of the Carter Family, has just been published, as has Bill C. Malone’s Don’t Get Above Your Raisin’: Country Music and the Southern Working Class, another essential offering from country music’s pre-eminent historian. And Treasury of Bluegrass — a two-disc TV offer from Time-Life that provides an excellent overview of the genre — recently climbed all the way to No. 30 on Billboard‘s Top Country Albums chart.

Down From the Mountain — the Nashville concert that served as O Brother‘s musical coming out party as well as the documentary film made of that performance, plus its accompanying soundtrack and now the follow-up tour — has made the most of the trend. Indeed, O Brother and Down From the Mountain have become marketing appeals as seductive to some as Starbucks or Britney are to others — sepia-toned brand names for those weary of today’s regularly superficial and needlessly noisy pop music. More to the point, they’re a 21st-century campaign to profit from seemingly simpler times — a particularly easy sell in an age when folks will forever remember where they were, as Alan Jackson sings, when the world stopped turning.

Noting the inevitable sales pitch isn’t a criticism, either. The music of the touring Down From the Mountain musicians is almost uniformly excellent. The Del McCoury Band, for instance, is as propulsive a bluegrass band as currently exists. On her 2001 album Mountain Soul, the Kentucky-born Patty Loveless proved that in addition to being the finest straight-up female country singer of her generation, she’s a devastating bluegrass vocalist. And, though Ralph Stanley’s artistic peak is a good quarter century behind him, his bracing hog-call tenor and mournful, Old Regular Baptist-bred phrasing already mark him as one of America’s greatest singers. For God’s sake, if you’ve never seen Ralph Stanley, go.

Still, the much-deserved attention now being lavished on the acoustic, prerock music of white Southerners almost always fails to make a key distinction. For most 21st-century fans, the phrase down from the mountain is entirely nostalgic; yet for those mountaineers who actually did the descending, the trip was anything but backward-looking. The phrase recalls a quintessentially American experience, evoking as it does the last century’s mass migrations from country to city, and from the South to the North and West, by folks seeking to forge brighter futures.

Just a generation or two ago in some cases, Southerners abandoned homes in the Ozarks for work in the stockyards of Omaha, Chicago and Kansas City, or for aerospace jobs in Wichita or California. Those in the Appalachians or the Deep South, on the other hand, were more likely to head for Pennsylvania steel mills or Michigan auto plants. They traveled anywhere they could land decent-paying work — a financial security and material comfort sought by musicians as much as anyone. Before becoming “the Father of Bluegrass,” Bill Monroe left Kentucky to work in a Chicago oil refinery. In the early ’50s, Ralph and Carter Stanley quit music altogether for a time, preferring steady paychecks from a Ford assembly line in “Dee-troit City” (to quote Bobby Bare’s 1963 crossover hit).

It’s no coincidence that in certain parts of Michigan, Illinois (where Alison Krauss was born and raised), Indiana and Ohio, bluegrass never really went out of fashion. For one thing — and despite its old-time reputation — bluegrass is a modern music — rhythmcentric, jazz-influenced and not even invented until after World War II. For another, those states still have a large built-in audience of transplanted Kentuckians, West Virginians and Tennesseans.

By 1960, one in six white Americans born in the South had left the region. In many ways, these Southerners were like immigrants. And because so much about their new homes was disorienting — the pace of life, the landscape, the way people talked, even the weather — they congregated in the same neighborhoods, nurturing the culture they’d brought with them, creating pockets of the South in the North. As historian John Shelton Reed argues, the South is anywhere you find Southerners, even if it’s on the streets of Baltimore or Cleveland. But the hard truth was that no matter how much of the South these transplants brought with them, “upnorth” wasn’t home.

The result for many was intense homesickness — not so much for an idealized South as for a place where all the stresses and limits at least had the advantage of familiarity. A young A.P. Carter, working on a railroad gang in Indiana, wrote “My Clinch Mountain Home” during just such a fit of homesickness. Then again, as soon as he and his wife, Sara, got their first fat royalty check, they bought a new house farther down the mountain and closer to town. That’s an altogether different impulse from nostalgia.

The motivation behind last century’s collective trip down the mountain continues today, as country fans once again move to where the jobs are — this time, the suburbs. Then again, quite a few in the Down From the Mountain audience would be aghast to be called country fans Aat allthunders. They listen to National Public Radio, not Hot New Country; they’re drawn to Ralph Stanley because his stoicism seems exotic, not because he reminds them of their grandfathers; they dig Emmylou Harris, not Toby Keith. These class divisions are part of the Down From the Mountain story as well, particularly considering just how far away from the mountain people perceive themselves to have come.

Yet whether they’re blue- or white- collar, it’s not as if fans want to head back to the hills for good. Harry McClintock sang about “The Big Rock Candy Mountains” in 1928 (a number included on O Brother and reprised by the late John Hartford on Down From the Mountain), a bucolic utopia where there’s a lake of stew and whiskey too and where they hung the jerk who invented work. But McClintock and his audiences, then as now, know firsthand that no such mountain paradise exists — even if the song is fun to hum along with as you pass another day on the factory floor or surreptitiously surf the Internet in your cubicle. Indeed, periodic treks back up the mountain are spiritually restorative, even necessary. Up there, you see where you stand, how far you’ve come, where you might go. But it’s no place you could live.