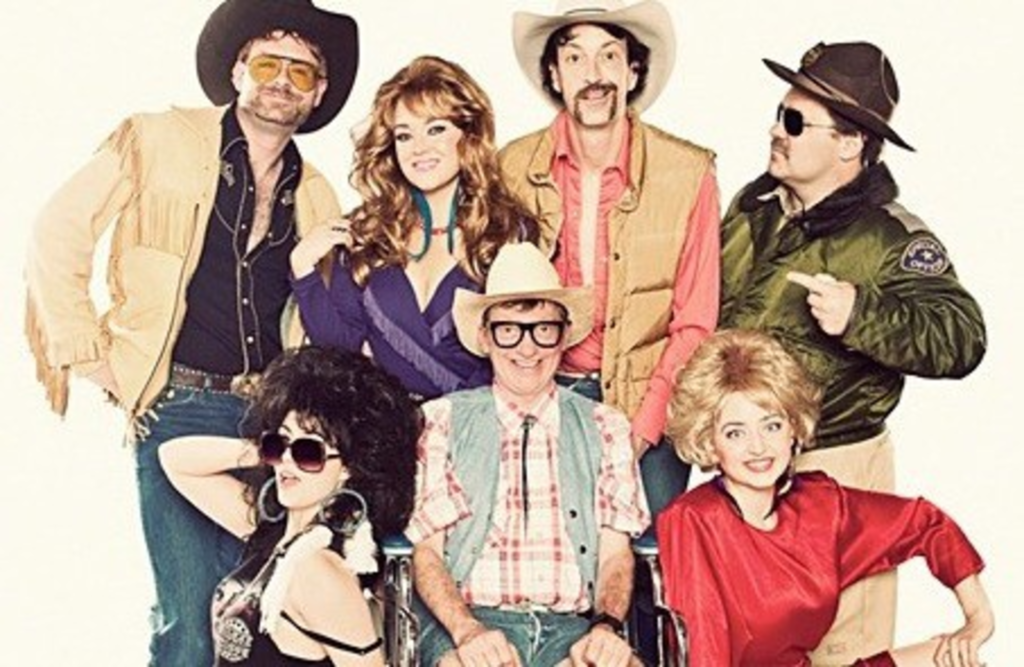 Before this past weekend, country music was one of those subjects — like airplane mechanics or professional sports — about which I was abysmally ignorant. Consider me schooled, thanks to Mother Trucker 2 (at La Esquina) and Honky Tonk Angels (at the American Heartland Theatre). Both offer crash courses in the soul and guts of country.

Seven years after the original, which was staged at the late Late Night Theatre, Mother Trucker 2: Ride On rumbles into the Charlotte Street Foundation’s La Esquina Gallery (part of its Urban Culture Project). The sequel finds Ruby Lee Jenkins (this time played by Kimberely Queen) settled in with Deke (Ron Megee), the bull rider she picked up on the side of the highway. Both dote on teenager Teddy Bear (Gary Campbell), her wheelchair-bound son, who likes to remind everyone that he’s “crippled but not blind.” As we’ll see, another important faculty remains intact.

Times are hard, and Ruby Lee is about to lose her house unless she can come up with $7,776.63 in back taxes. Deke hatches a plot to haul a bull to Las Vegas in Ruby Lee’s pink Peterbilt, and the family is off. Along the way, they run into Ruby’s brother, Slim Jenkins (David Wayne Reed, also the show’s writer, producer and director), traveling with Barbara Mandrell as her opening act.

Camp it is, but with plenty of Kumbaya. The script and production are wildly creative (Venus Starr’s astounding costumes are perfect), but more important, Reed grounds the story in heart and good will. Although plot elements fit together cleverly, the performances are what really keep the show trucking.

Mother Trucker 2 is a star vehicle with lots of stars. As the eponymous Mother Trucker, Queen is queen of the show, giving us a heroine whose sincerity and dignity make us root for her at every turn. Ruby Lee has a Dolly Parton-sweet speaking voice and lots of sexy sass, but most of all, she is a mother protecting her Teddy Bear and trying to save their home.

Good thing Teddy Bear is being truck-schooled. He’d be bully fodder in any regular school, with his industrial glasses, wheelchair and borderline-creepy precociousness. Campbell gives his jorts-rocking man-child an unflappable and valorous good nature. When he learns that he has been forgotten by both his uncle and the taker of his virginity, he bravely takes to the road on the only wheels he has.

Megee is brilliant as the most macho man in KC, studly and horny and fatherly. With a full-grown handlebar mustache, cowboy-tight jeans and a hard-on in his heart for Ruby Lee, he plays it straight in all senses of the word. Megee also has one of the best singing voices in the show. (Reed has the other one, great on “Texas Bound and Flyin'” and hilarious on “Angels Flying Too Close to the Ground.”) Queen’s singing voice is pretty but faint, though her “I Never Promised You a Rose Garden” is one of the show’s best numbers, thanks to droll backup from Ashley Otis and Shannon Michalski.

Darryl Jones returns as Sheriff Dick Walker, and Cody Wyoming appears in minor, mostly mulleted roles. But Otis and Michalski get to whoop it up as everything from a champion Mary Kay saleswoman to a gallant highway patrolwoman. Michalski is a fearless performer. She seems to enjoy sending up lesbian and butch types, and her sneer is magnetic.

This being a DIY kind of production, there were several minor mishaps the night I attended (a flapping door, a flapping mustache), and the comic potential of each did not go unfulfilled. Queen has a gift for improvisation, and she nearly rivaled scripted lines in comic precision.

This family story is heartwarming, the characters lovable, the tone exactly right. Played as earnest as rodeo-clown costumes and sister-wife routines allow, Mother Trucker 2 is surprisingly touching and every bit as funny as you’d expect.

What do you do when a man does a woman — or three women — wrong? Me, I want to kick Ted Swindley, nominal author of Honky Tonk Angels, in the head.

Honky Tonk Angels is nothing more than a couple of dozen well-known country and honky-tonk songs Scotch-taped together with a thin story. The show gives each song a literal and undignified interpretation and asks three superb actors (Teri Adams, Colleen Grate and Jessalyn Kincaid) to do things no woman should have to do, let alone onstage.

Tammy Wynette, writer and performer of “Stand By Your Man,” stood by no fewer than five husbands. But in this show, Adams must sing the song as a woman ironing her no-good husband’s clothes in their double-wide trailer.

Swindley is not only unimaginative but also cynical and condescending. This show’s songs celebrate the women of the working class. Swindley just mocks them. He thinks there’s something inherently funny about having a truck-driving husband named Bubba. The shame of it is that this show’s three stars are phenomenal singers and performers, and they’re backed by a kick-ass band — John Wirt, Ry Kincaid, Jay Miller and Russ Weaver — led by the ever peppy Jeremy Watson. Too bad we can’t hear them sing and play these wonderful songs without enduring distressingly bad jokes and humiliating stereotypes in between.

If any show can put leaving on your mind, it’s this one.