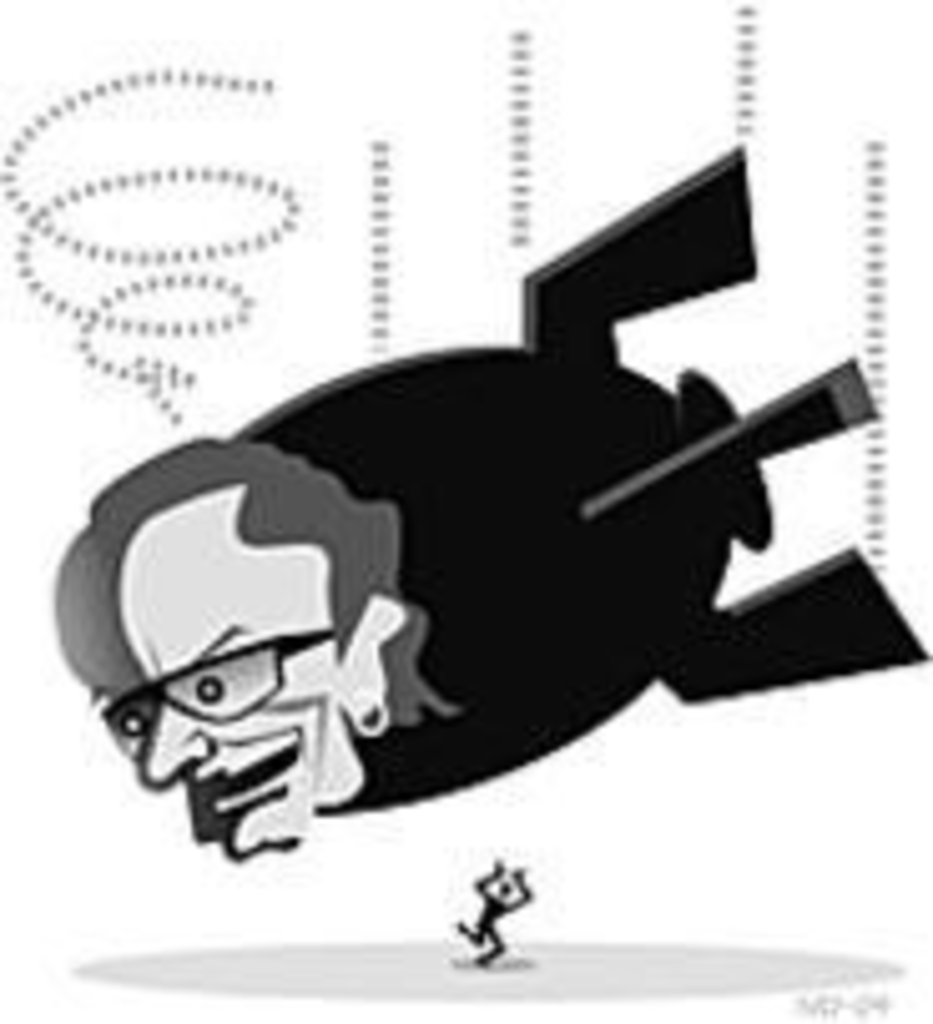 Let it be known that I do not take the release of a new U2 album — or the public disparaging of same — lightly. Harsh personal experience taught this lesson. After writing a few discouraging words about the band’s last record, All That You Can’t Leave Behind, for a Cleveland paper, I received angry hate mail.

“I suppose we can’t expect much from a writer whose favorite bands while growing up included Hall & Oates, M.C. Hammer, and yes, even Vanilla Ice,” Mom wrote, in a published letter to the editor. “But it’s particularly disturbing to me, since I bought Rob’s very first concert ticket. At the age of 14, he went to see U2 and thought they were ‘the bomb.'”

1. I was totally into Hüsker Dü.

2. “The bomb” is a blatant misquote. I most likely pronounced the show “sweet.”

3. My first concert was the Monkees. Weird Al opened.

4. Time, distance and the Slow Dawn of Reason have redeemed me: All That You Can’t Leave Behind sucked.

Sorry, Ma, but Ireland’s finest burdened one megaton single (“Beautiful Day”) with ten awkward, flailing whiffs at the piñata of beauty, poignancy and cultural relevance. But the piñata exploded of its own accord on 9/11, when America fired up an urgent Batsignal calling for Bands That Matter, and Bono, with his American flag jackets and poignant, nudity-free Super Bowl halftime shows, gladly acquiesced to “Save the World.”

Thus, the triumphant arrival on Tuesday of How to Dismantle an Atomic Bomb, a far superior but still somewhat middling effort that highlights U2’s diminishing skills — both the diminishing and the skills.

No way I’m strolling through this minefield alone again, though. This time someone’s coming with me to co-review.

“This is truly great stuff!” Mom writes. “You know how I feel about U2: I’m biased. There isn’t a single track that I would skip through. It was good for the soul to hear from Bono again.”

(To give you an idea of her specific U2 bias, she broke her Bomb critique down track-by-track, and each one began the same way: “Bono still has it going on.”)

Ma’s right, though, at least on “Vertigo,” which she boldly predicts will be “a Top 10 hit.” The ubiquitous iTunes jingle is as brash and unhinged and Dude, turn it up, dude a song as this fat ‘n’ happy pack of Rock God lifers could ever hope for.

“Miracle Drug” even trumps it, Bono loosing the first of several bumblingly earnest lines — Freedom has a scent/Like the top of a newborn baby’s head — before the band immediately buries it in one of those monolithic, blood-freezing blowout choruses that remain solely U2’s province. Mocking this band is great, great fun, but when the planets align, its dominance is unquestionable.

“This one speaks to your soul,” Mom concurs. “It’s a sweet ballad.”

Ah, but sweet ballads are precisely what U2 now lacks. “Miracle Drug” is great, but those who wistfully dream of another “One” or “With or Without You” must once again do without. “Sometimes You Can’t Make It on Your Own” at least manages a dynamic shift (mournful guitar, Bono’s somber croon), but U2 is hellbent on pounding out as many midtempo, somber-but-optimistic self-help VH1 rock numbers as space and time will allow. Bomb‘s second half is loaded with well-meaning but well-worn vanilla lullabies.

Just do a freaking duet with Dido and get it over with already.

But Mrs. Harvilla disagrees, striking a common refrain: “soulful.” Take the distinctly Coldplayesque “A Man and a Woman.” “Bono still has it going on,” Mom writes. “Again, he speaks to my soul with this one.” The lyrics particularly struck her: The only pain is to feel nothing at all. “Genius,” she concludes.

“Love and Peace or Else” also earned soulful status, with the Edge — whose still-glorious master of the delay pedal qualifies him to sire your children — unleashing some guitar-effects squalls to balance out Bono’s Where is the love? pleadings. “Hard-driving and edgy,” Ma declares. “This is very soulful, topical, creative stuff.”

But she saved her loftiest praise for Bomb‘s closer, “Yahweh,” a fine eagles-soaring-gloriously-over-the-countryside affair. “Bono truly does still have it going on! I loved this. It’s a beautiful, touching prayer of a song. Classic Bono U2.” (This from someone with typical “red state” values.)

I contend that even Massachusetts’ eyes will mist a bit when the tune’s climax hits, Bono crooning The sun is coming over the ocean/This love is like a drop in the ocean as the Edge mimics the ripples.

Bomb isn’t entirely swoony mom stuff — the eight-car-garage rock of “All Because of You” won’t re-induce vertigo, but it might make you slightly dizzy. And when the house lights go down a coupla months from now during the inevitable supporting tour, and U2 bursts onstage to the mashed-potatoes-for-the-soul strains of “City of Blinding Lights,” your fist will invariably pump along to the amped-up chorus: Oh! You! Look! So! Beau-ti-ful tonight!

Mom’s fist certainly will. “When I tried to come up with something interesting to say about each track, the same adjectives kept popping up: Classic U2, Passionate, Soulful, Hard-Driving, Edgy (no pun intended), Creative, Innovative,” she raves. “I can see myself blasting this one in the car to and from work on a regular basis.”

All right! Both to and from work! A ringing endorsement if ever there was one. But Bomb, though not entirely the bomb, is evidently soulful (and sweet) enough to squeak by.