MORE2 and the Albers family call for Chief Donchez resignation 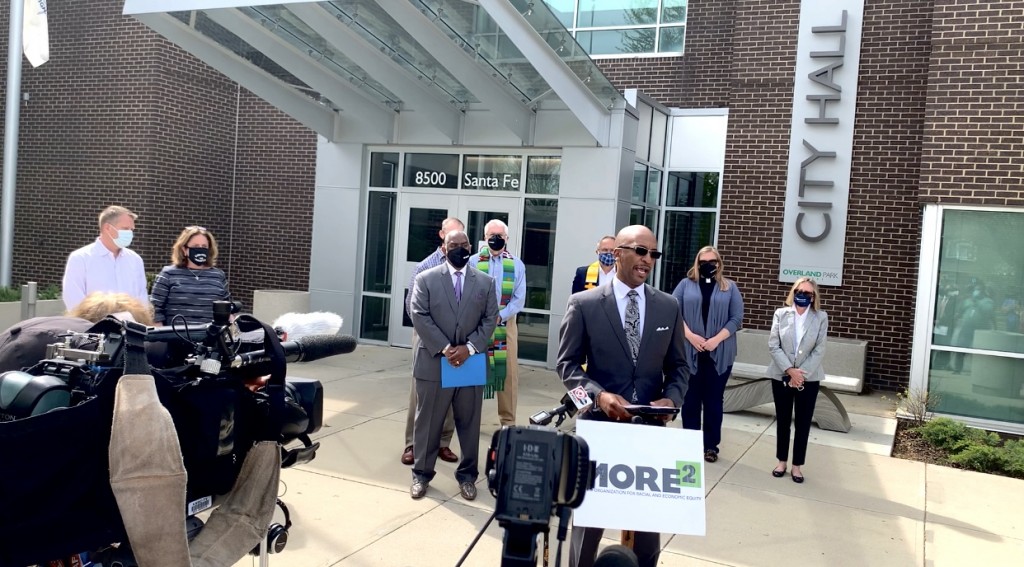 Faith leaders from Johnson County held a press conference yesterday morning outside the Overland Park City Hall, flanked by representatives of the Metro Organization for Racial and Economic Equity and representatives from their national affiliation, The Gamaliel Network. The group and key speaker, Sheila Albers, called for the termination of Overland Park Police Chief Frank Donchez.

Reverend Dr. Chris Wilson, pastor of Sant Andrews, kicked the conference off with a proclamation that the group had gathered to express the overall “lack of confidence in the leadership of our police”.

That sentiment is echoed in the “Letter of Resignation” MORE2 made public on its website. The open letter to Overland Park’s leadership seeks signatories to bolster their request that Chief Frank Donchez be terminated.

The Albers family lost their son John when an Overland Park officer shot and killed him while he was pulling out of his driveway. Albers called for “transparency and accountability” for the Overland Park Police Department. She says, “For 3-1/2 years, Steve (her husband) and I have listened to city leadership engage in telling lies or omitting information.”

She continues: “The city, in a severance agreement, agreed to falsify information to Kansas State CPOST, along with a $70,000 payment to the officer who killed my son. This is anything but voluntary or ordinary.” The reference Albers makes to “voluntary or ordinary” is in regards to the category Donchez used to document the officer leaving Overland Park. His paperwork indicated the officer was leaving on the best possible terms.

The Albers feel the chief was disingenuous at best and at worst, may have committed perjury when he filled out the paperwork, not citing the officer’s negligence. To add insult to injury, he paid the officer $70,000 in severance to leave. They feel future employers should know about the killing before they hire the officer. They also felt Donchez paid him to go away quietly and tried to hide the severance money and its purpose.

A lone spectator at the conference dissented from MORE2 and Sheila Albers. She was auspicious by the sign she held, “I Support the Police”. Her name was Mary Brown. After saying she didn’t “work” for the city initially, Brown admitted that she was the Chaplain for the Overland Park Police Department.

“We cannot continue to keep after the Overland Park Police Department,” Brown says. “I believe it was handled the way it was. The police officer is no longer in our police force and we need to move on. I’ve encouraged Sheila Albers… I asked her if she has tried forgiveness.”

Reverend Bobby Love, pastor at Second Baptist in Olathe, says there is a definite need for change in direction within the Overland Park Police department. “As people of faith, we have longed and prayed for what is broken to be made whole, but we must remain firm in our conviction that telling the truth is always the right thing to do,” he says.

Reverend Love’s comments conveyed disappointment in the way the Albers case was handled. But they also referenced a loss of faith felt by people of color in the department. The open letter from MORE2 states, “Yet, when threats from white nationalists emerged, Donchez chose to crack down on protestors rather than to stand up to extremists. We cannot accept bending to the demands of white nationalists.”

The threats referenced in the letter were made by three men at an Overland Park Public Safety Meeting on Aug. 8, 2020. White nationalists had been in communication with Overland Park Police and officials after a peaceful protest held in Overland Park on July 11, 2020, two weeks before police showed up to another peaceful protest in riot gear and arrested protestor Darrien Richmond. They wished to discourage future meetings as were planned for two weeks later.

The men who spoke at the meeting, as a matter of public record, thanked the police for shutting down the July 24 protest. They admitted they had told police that if they hadn’t acted, their group would have and that they, ”weren’t trained to handle terrorists”.

The Overland Park Police Department showed up at the second protest in full riot gear. Only two weeks earlier, they had accompanied protestors and by all accounts been helpful. Needless to say, the protestors couldn’t figure out why they received such a different reception at the second, but it was revealed later that these nationalists, one of whom is currently in custody for his role in the attack on our own Capitol, had demanded that police stop future protests.

The participants were not made privy. Four were arrested: three Black people and one white woman. The Black man was charged with a felony. District Attorney Howe charged a young man with a felony for running to the aid of his wife who screamed his name as she was being arrested.

City Councilman Chris Newlin adds, “The Chief mentioned that Proud Boys were going to show up. It was unfortunate that protestors were arrested.”

Newlin leads Overland Park’s Mental Health Task Force. He spoke with me at length. He finds Chief Donchez to be the kind of chief who is amenable to changing direction, which he finds critical in good leadership.

Chris expressed concern that a replacement for Chief Donchez may not be as open to working towards making Overland Park more safe and equitable.

“I don’t anticipate Donchez leaving and personally don’t have the authority to release him,” Newlin says. “Chief Donchez was not initially for the ‘Crisis Intervention Training’ program I proposed. I met with him. We talked. And he changed his thinking on it.”

How does Overland Park’s policing in 2020 look, by the numbers? 4.6% of Overland Park is Black. 78% is white. Via KORA request here is how policing under Donchez looks, factoring how citations and arrests were registered demographically:

I spoke with Councilman Newlin about these stats. In addition to his “Mental Health Task Force”, Newlin mentioned the “CIT” program which is supposed to initiate calmer traffic stops. “Traffic stops are anxiety-provoking and 10 times more if you are black”, he says.

The city of Overland Park, Kansas, the second biggest in the state, released a statement on the evening of April 26. “The City has decided to release the report that is in our possession,” the statement reads. “Continuing to withhold the Officer-Involved Shooting Investigation Team report has become an obstacle to restoring the community’s trust and confidence in the City of Overland Park, its officials, and the Overland Park Police Department.”

The Albers family had requested the report for three years. You can find the rest of the city’s statement which followed the MORE2/Albers announcement here.

The group has requested the termination of Chief Donchez, seeking a new era in Overland Park. One of transparent policing and leadership. The city is indicating that is not likely to happen.

It is a matter of public record that Donchez applied, but was not selected for the City Manager position of Murfreesboro, TN shortly after John Albers was killed by an officer. I reached out to Chief Donchez for a comment but was not given one. As such, I cannot confirm his future plans.