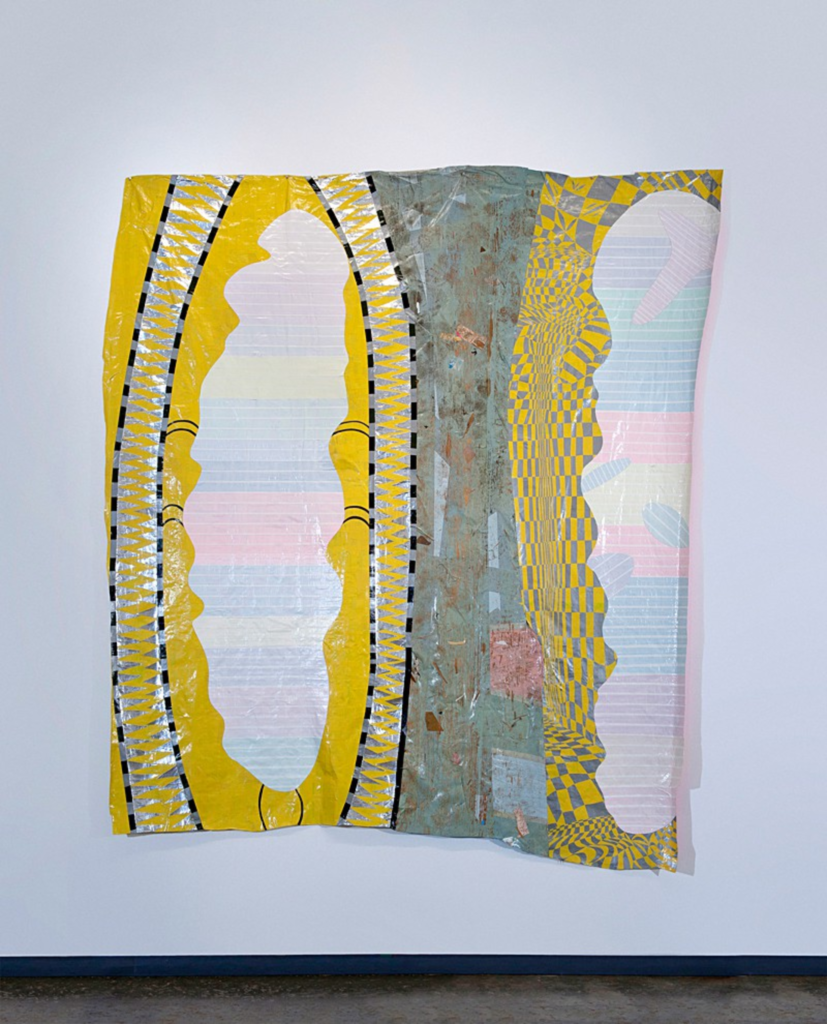 Search too hard for meaning in Garry Noland’s work at City Arts Project and you’ll miss the point.

Viewing Noland’s abstractions is, first and foremost, a pleasure. His pieces command a visceral reaction that’s basic but all too rare: It’s hard to stop looking at them.

Of the 14 works in Made and Connected, the most immediately dominant are the tapestrylike wall hangings. It takes a moment, as you walk toward them, to see that they’re assembled from adhesive tape — countless pieces of it, overlapping countless times. Look closer and the intricacies come into focus: richly textured surfaces with layered and complex patterns. With a hardware store’s worth of duct tape, Noland tests just how much the eye can take in. If that sounds cacophonous, it’s actually closer to a symphony.

The harmony that Noland achieves is most apparent in “Ticket,” a piece from 2011 that’s roughly 9 feet by 8 feet. Strips of tape, in what look like a dozen colors, move from the straight right edge toward the center, undulating like an overgrown amoeba. The form is bordered on the other side by a psychedelic pattern in yellow and gray. Waiting in the middle are bits and pieces of Noland’s studio floor, the sticky side of the tape having pulled up wood, dirt and rubbish. Approaching this top-to-bottom coating of detritus from the left edge is a shiny-tape arc of fanglike zigzags. There are oppositions here: bright and understated colors, glossy and matte surfaces, hard-edged and organic-seeming forms, even the debris or its lack. But it’s the tension in these contrasts that keeps you riveted.

“Cripples,” a series of tape panels in which Noland explores variations of a single form, hangs on the largest wall in the gallery. (Well, part of “Cripples” does — it’s a work in progress, begun in 2009, and some of it is also now at the Nerman Museum of Contemporary Art.) Within each panel is a shape resembling an upside-down box with an open flap (picture a blocky uppercase letter P). The 132 panels at City Arts, arranged in a grid, make Noland’s thought process more apparent than his tape tapestries do. Here he has limited his options by playing with a single form. The panels take up a lot of space, but they also can’t help being overshadowed by the tapestries.

If “Cripples” feels like a series of tests leading up to the tapestries, six small collages in the exhibition suggest that he has had the answers all along. They are tidy little exercises in positive and negative space executed in wood-grain vinyl on vellum. In “Hard Tail,” from 2011, rectangles of dark-colored material appear adjacent to similarly shaped cutouts in the larger, lighter square occupying the bulk of the composition. Noland creates a simple visual problem — then elegantly solves it.

And his solutions seem to materialize in front of you. With his selection of material, his use of shape and grid, and the shifting scale of these works, Noland lays out two years of decisions made in the studio and finds where they connect. Just looking at the results is its own singular thrill.