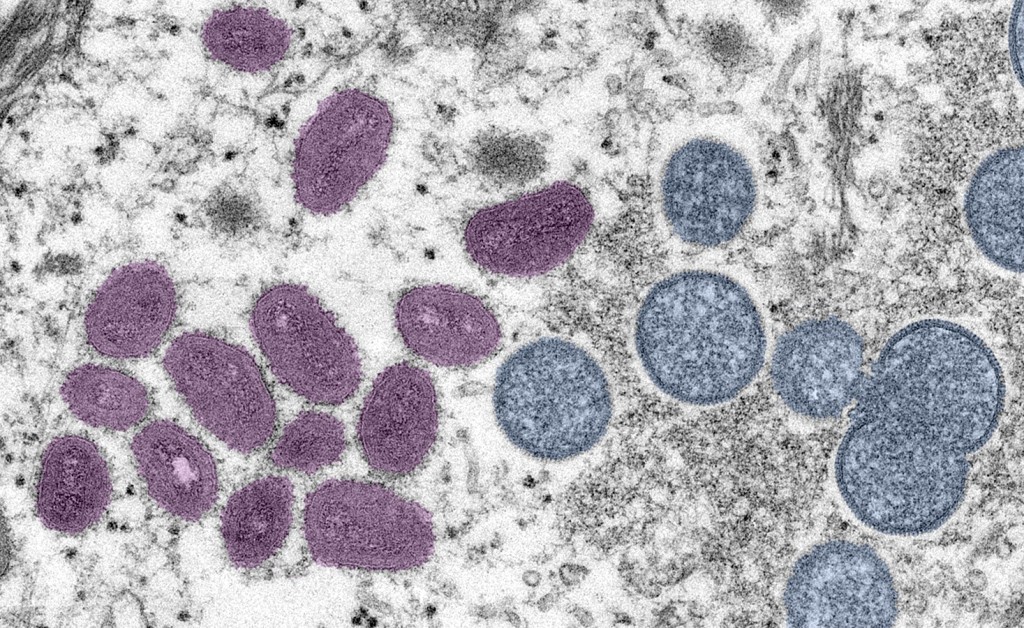 This digitally-colorized electron microscopic (EM) image depicted monkeypox virus particles, obtained from a clinical sample associated with the 2003 prairie dog outbreak. It was a thin section image from of a human skin sample. On the left were mature, oval-shaped virus particles, and on the right were the crescents, and spherical particles of immature virions. // Courtesy CDC/ Cynthia S. Goldsmith, Russell Regnery, Hannah Bullock

WASHINGTON — New monkeypox cases have been trending downward nationwide for more than two months, giving some hope the decades-old virus that had its first major outbreak in the United States this year is nearly under control, or even on its way out.

However, experts caution that Centers for Disease Control and Prevention data broken down by race and ethnicity shows the percent of cases affecting Black people increasing, while there’s been a decrease among Hispanic and Latino people and a flattening out among white individuals. That data, however, is not complete, leaving out more than 30% of cases.

Overall, cases of monkeypox within the United States appear to have peaked in early August, about two-and-a-half months after the first case of this outbreak was diagnosed in mid-May, sparking a nationwide vaccination drive that’s been criticized by public health experts and members of Congress.

But those vaccination efforts, combined with a massive education campaign about the virus and behavioral changes by those most at risk, appear to largely have had the intended effect.

During the six-month outbreak, 27,500 Americans were diagnosed with monkeypox, which often presents with a rash as well as fever, tiredness, chills, itching, headache, swollen lymph nodes and muscle aches in a majority of cases reported to the CDC.

Despite the stumbles throughout the past five months, public health experts interviewed by States Newsroom said monkeypox cases could continue to decrease in the coming months, though they cautioned there’s plenty of work to be done before that might happen.

A decline in social activities, an increase in vaccinations and a broader understanding of how monkeypox spreads all helped to decrease new case numbers, though Guest said it will be a while before public health experts can look back “​​at how successful some of the interventions and education campaigns were.”

Guest said the best case scenario for him, if cases reach zero for a sustained amount of time, would be for public health officials to continue talking about monkeypox. He’d also like to see doctors include education about the virus in regular checkups and STI testing, for vaccinations to continue and for the one approved vaccine to be stockpiled for a possible future outbreak.

He cautioned, however, that certain pockets of the country or larger cities could continue to see periodic upticks in positive test results, even if the virus remains dormant for large swaths of the time.

“What I think I unfortunately know, is that oftentimes we have a very short attention span,” Guest said. “And once it seems like we’ve dealt with something, we kind of move on to the next thing or now that the emergency is over … we are not going to dedicate funding and resources to addressing these challenges.”

Jessica Justman, associate professor of Medicine in Epidemiology at Columbia Mailman School of Public Health, said the CDC data on race and ethnicity is concerning.

“That steady increase in the Black and African American population really makes me say, you know, we can’t just completely sit back here,” Justman said.

“We’ve just seen the same kind of story over and over with other epidemics, with HIV, with COVID, that these infections tend to concentrate in certain parts of the population that probably have less access to vaccines, have less access to health information,” she added.

After the first month of this outbreak, white people made up about half of all cases in the U.S., with Hispanic or Latino individuals making up about 31% and Black or African American people making up less than 12%, according to the CDC partial data for the week of June 19.

Since early July, the percentage of Hispanic or Latino individuals diagnosed with monkeypox has stayed around 30% of total cases until mid-September, when it decreased into the low 20% category.

But since early July the share of white people with the virus has decreased from making up 37% of cases to accounting for 29% of diagnoses nationwide. In that same time frame, the percent of Black or African Americans moved from making up 22% of all U.S. cases to 42%, according to CDC data.

CDC Director Rochelle Walensky said during a briefing on Sept. 15 that public health officials had begun to see the “racial and ethnic makeup of this outbreak evolve.”

The Kaiser Family Foundation’s breakdown of CDC data on race and ethnicity, which only includes 68% of cases reported as of Sept. 23, notes that “Black and Hispanic people account for larger shares of cases compared with their shares of the population.”

For example, while people of color make up about 40% of the U.S. population, they made up about 70% of the monkeypox cases at that time.

Data on vaccinations is also skewed when broken down by race and ethnicity.

Walensky said during the briefing in mid-September that white individuals made up 47% of people who received their first dose of the Jynneos vaccine, while Hispanic individuals represented about 21% and Black people about 12%.

The CDC’s data, however, isn’t complete, coming from 39 jurisdictions, accounting for roughly 91% of first-dose shots.

“Really, to me the marker of when to say we’ve done enough is when you have covered a very high percentage of the at-risk population,” she said.

Justman said the decline in monkeypox cases within the United States is due to the vaccination campaign as well as behavior changes, though she cautioned there isn’t a lot of data on exactly how many people have adopted changes to physical contact the way there’s detailed information about vaccines.

Justman also said it’s far too soon to predict if monkeypox cases will continue to decline in the weeks and months to come.

“I feel like it’s still a little too soon to do that kind of crystal ball gazing,” Justman said. “To me, it requires more time to see what the pattern is going to be.”

Monkeypox, first discovered in 1958 in research monkeys, spreads through direct physical contact, by touching fabrics such as bedding or towels used by someone with the virus, or by contact with respiratory secretions, according to the CDC.

Since the first human case was diagnosed in 1970, the vast majority of cases have been in central and western Africa, while cases outside that region have been linked to travel to the area or imported animals.

This year’s outbreak, the largest in U.S. history, began in mid-May when doctors diagnosed the disease in a Massachusetts man. Europe and other regions of the world where monkeypox isn’t traditionally diagnosed also experienced a significant outbreak this year.

In total, there’s been more than 72,000 monkeypox diagnoses in countries without a history of the virus. There have been 28 deaths, including two in the U.S., according to the CDC.

Elizabeth Finley, director of communications at the National Coalition of STD Directors, said that while she expects new diagnoses of monkeypox to continue to decline, she doesn’t expect the virus to disappear.

“I think we will continue to see a low number of monkeypox cases,” she said. “I don’t think it’s going away.”

One key aspect of the ongoing response, she said, needs to be developing a better understanding of how well the Jynneos vaccine performs after one dose as well as after the complete two-dose series, and how long protection will last.

“This is a vaccine that was designed to help the nation or other nations address a smallpox outbreak. It wasn’t necessarily designed to be a long-term plan for something like monkeypox,” Finley said, adding, “we just need to know more about the vaccine.”

While anyone can get monkeypox, this outbreak has predominantly affected gay, bisexual and other men who have sex with men, leading public health officials to urge community members to limit physical contact.

But, Finley said, experts haven’t been clear about how long and to what degree people should withhold or severely limit physical contact.

“I don’t know that that’s sustainable. And frankly, I don’t know if it’s fair to ask people to sustain that kind of a change,” Finley said.

As cases of monkeypox continue to decline, Finley said, she hopes public health officials will target their outreach to people who have little to no access to health care and who may not be vaccinated.

Amesh Adalja, senior scholar at the Johns Hopkins Center for Health Security at the Bloomberg School of Public Health, said he believes it’s going to take some time before the United States reaches zero cases, though he thinks it’s possible with sustained education, vaccination and treatment.

“The U.S. can get to a certain level of resiliency, but there’s always going to be some chance of importation from all of these other European countries, for example, where the disease is also spreading,”  Adalja said. “So there may still be sporadic outbreaks until enough of the population is immune here or vaccinated. And if the vaccine is considered robust enough to keep it at bay.”