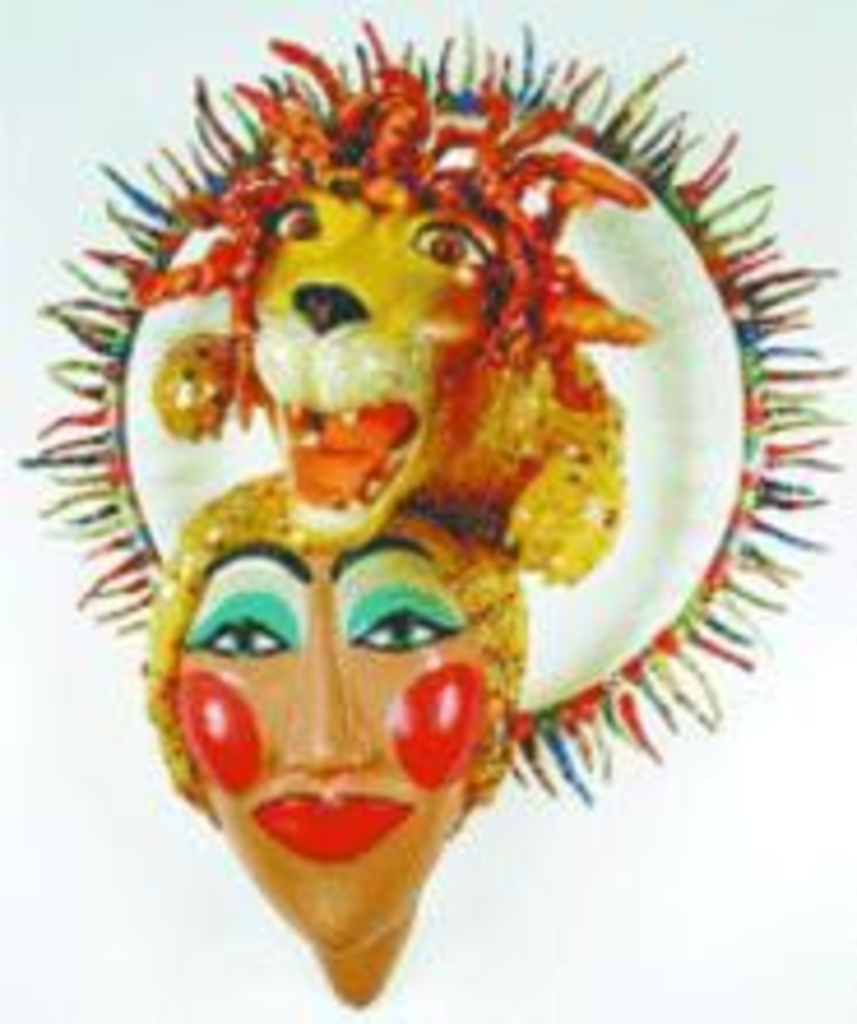 Circus characters star in the work of Rochester, Minnesota, sculptor Judy Onofrio. There’s a sequined female dancer, a lion jumping through a circle of fire, a juggler, elephants — and above all else, monkeys. They inhabit nearly every piece.

Onofrio’s animals are more than decorative or cute. They frequently mirror — or ape — their companions, sharing the limelight with Onofrio’s female stars. The monkeys and women have similar faces, too, with heavily rouged cheeks; big, puckered lips swathed in lipstick; exaggerated, unseeing, almond-shaped eyes; and an emotional disposition that is detectable for those who look for it.

For Onofrio, there’s no clear distinction between the animals and the humans. The two deserve equal attention and share the same space and power. “I think they’re often one and the same,” she says. “A lot of them have a human persona. It’s kind of a crossover with both.”

The self-trained artist frequently adorns her sculptures with found items, lending them a homemade quality. Beads, jewels, cut glass and other objects — such as English toffee cans curled by hand — form neatly arranged mosaics in the 11 mixed-media sculptures on display at Sherry Leedy Contemporary Art.

Of the six pieces in the front gallery, “In Her Dreams” is nearly overwhelming, given its massive size (111 inches high by 55 inches wide and 55 inches deep). Onofrio attaches red tiles and sausage curls of wood to the mirror base, forming a pyramid on which a dancer balances. She poses with an open leg extended in a painful-looking ballerina’s pose. Curiously, she holds a jester in her left hand; it looks in her direction implying a communication between the two. This piece and others, we’re told, showcase the artist’s desire for balance.

“She’s doing an ultimate trick,” Onofrio says of this dancer. “I thought I’d invented something that was nearly impossible to do when a woman came into my studio and did it.” Unlike Onofrio’s smaller figures, which are predominantly made of wood, “In Her Dreams” is Fiberglas.

In the similarly themed “Tilt,” a woman balances on her head a tray of variously sized wineglasses. She smiles, seemingly seeking approval. “It’s an exotica kind of thing. She feels like a circus act,” Onofrio says, explaining another theme: the notion of being on display. It’s intensified when women and animals together perform a show of daring, bravery and physical skill.

The wonderful “Meow” showcases a different animal — a lion leaping through a ring of “fire” (rolled toffee tin cans) in full-attack mode. His pink tongue and white teeth show a combination of ferocity and playfulness — he seems to have been formed from the turban wrapped around the head of his female counterpart, as if he’s a product of her creative mind. Onofrio emphasizes the power of imagination in creating magical, more-alive alternate worlds.

“Three of a Kind” shows a woman with a beautiful green parrot who offers a beaded bracelet splayed above her head like a rolling wave. To her right, a giraffe’s head grows out of the wall and is, like all of Onofrio’s work here, ostentatious, ornate and sparkly. “Ringmaster” features small, ceramic elephants circling around the head of the familiar female face, and “Loaded Dice” has the star juggling dice, a cup and a ball while lights shine from her platform. The monkey dangling below, wearing her style of makeup, holds a wax die in its left hand as another monkey sits on one of the arms of the star behind her, caught in a “see no evil” pose. The most subdued piece here is “Can You Keep a Secret,” in which the hat-wearing monkey covers his mouth in a “speak no evil” pose — it’s smaller and less extravagant but no less impressive than the others.

Onofrio says the monkey face is an image that she’s been working with since she started creating art. She describes it as “almost an icon image,” something she needs to keep working with to understand. “If I knew what it meant, why do it? It’d be boring.”

There’s no danger of that. This show is more fun than a barrelful of mysterious icons. Whatever the women do in Judy Onofrio’s sculptures, monkeys do, too.