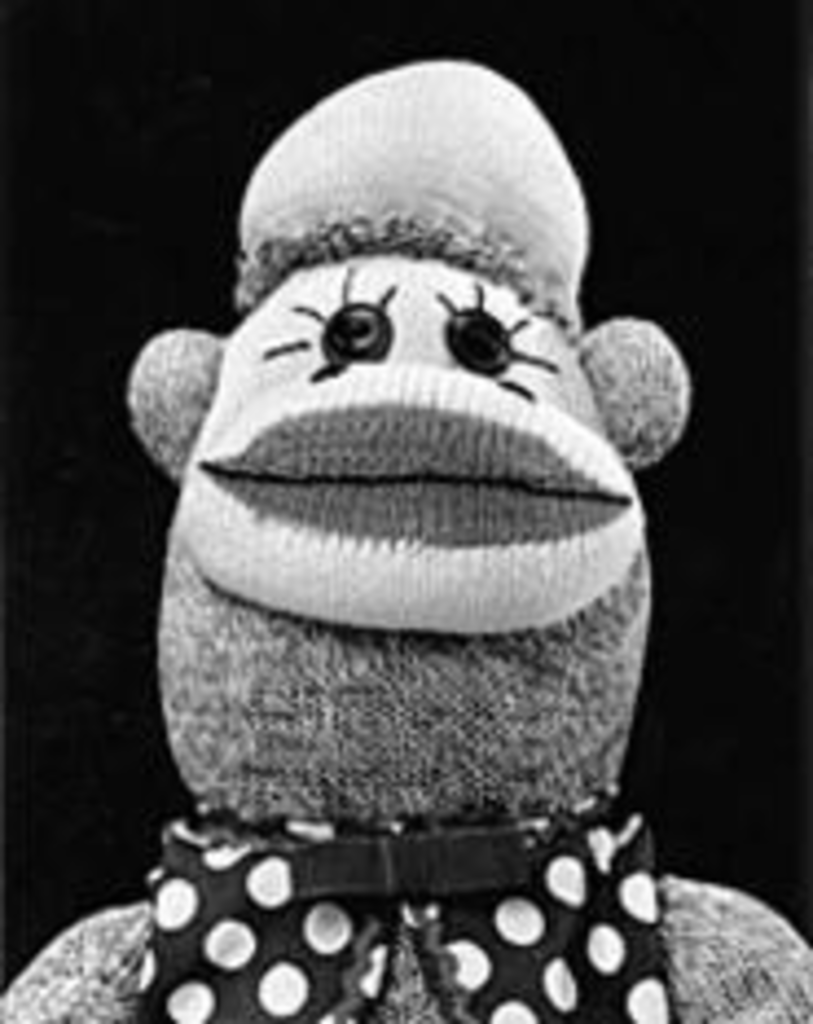 The curse of growing old is watching everything you grew up with grow old and ironic, then finally turn into kitsch. So walking by the window of Dolphin (1901 Baltimore) and seeing sock monkeys in cheerleader outfits and bondage wear, you could be forgiven for thinking it’s just another case of rehashed Americana. Gallery dealer Ron Warren has made a passion out of collecting sock monkeys (he now owns more than 1,800), and photographer Arne Svenson’s Sock Monkeys show documents Warren’s collection, her work functioning as commentary on both American iconography and the mania of collectors. The photos are starkly shot in black-and-white, head-and-shoulders photos that are creepy, cute and compulsive — as compulsive as the urge to collect.

Created by Kaitlin O’Brien, Kim Lindaberry and Kelly Younger, the sock monkeys suspended in the Dolphin’s window are fewer in number and far more cuddly than the pictures inside. Constructed from red-heeled work socks, they sit snugly beside toilet-paper cozies and crocheted signs that read “Bless This Mess.” These artists’ interest was not in simply documenting the ubiquitous sock monkey but in warping its image, letting the monkeys’ pendulous breasts swing shamelessly or dressing them in All Pro football jerseys.

The gallery is open only from 9 a.m. to 5 p.m., but the window never closes, leaving the dark night to ponder sock monkeys while waiting for Town Topic to open.— Christopher Sebela

Yo La Tengo has resumed its Summer Sun tour and will finally be coming here. It’s true that “Autumn Sweater” is this band’s best seasonal tribute, but the intensity of Summer Sun — a mellower album that dives into experimental blippy-bleepy sound — is remarkable. And the sweet-but-not-trite lyrics the band somehow manages to come up with on every album? Summer Sun is no exception. Yo La Tengo shows are fun, and shenanigans should be considered par for the course. We hope to hear a couple of songs from the Today Is the Day EP (which arrives in October), too. The show starts at 9 p.m. at the Granada (1020 Massachusetts, 785-842-1390) in Lawrence.— Gina Kaufmann

Anyone who has fumbled through a box of old family snapshots (you know, pre-Polaroid vintage) and wondered “Who the hell are these people?” probably has a special affinity for the MikWright greeting-card line. Each card boasts an absurd snapshot featuring family members of founders Tim Mikkelsen and Phyllis Wright-Herman. That devilish duo, responsible for the hilariously rude messages inside the cards, sign books (compilations of their oddest cards) and comment on the photos from 11 a.m. to 3 p.m. at David Gregory Inc., 2712 West 53rd Street in Fairway. Twenty percent of today’s sales will be donated to the KC Free Health Clinic.— Charles Ferruzza

Six Kansas City dancers from a variety of established troupes have banded together to put on their own kind of show. Performing Sextet, this hybrid of local dance entities (Aha!, Alvin Ailey, UMKC Conservatory) takes the stage at the Fahrenheit Gallery (1717 West 19th Street) at 8 p.m. Thursday and Friday, and 9:30 p.m. Saturday. With both set and lighting design by outlandishly colorful painter David Ford, the stage should be a sight to behold. Tickets cost $10, which is less than you’re likely to pay to see most of these dancers with their full companies. For information, call 816-304-5477.— Kaufmann