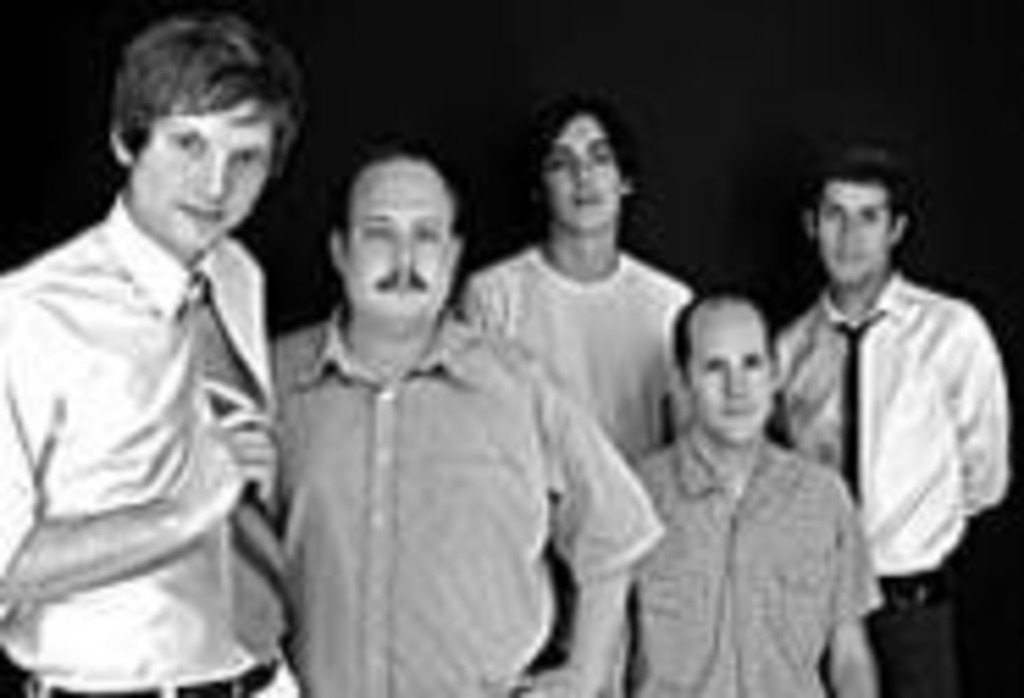 You know that scene in The Shining?

What am I saying? Of course you do. Even if you haven’t seen Stanley Kubrick’s cabin-fever cautionary tale, you still know the scene. It’s the only thing anyone remembers: Jack Nicholson’s character has just gone three shades of batshit insane. He’s chasing his wife with an ax. He chops a hunk out of a locked bathroom door, sticks his leering, maniacal mug through the splintered door and howls, Heeeeeeeeeere’s Johnny!

The lead singer of Doris Henson is peering with a deranged grin through the front-door blinds of the house on 40th Street that he shares with drummer Wes Gartner.

Not that I expect a hatchet in the chest when I cross the threshold. But everyone is wary of the thin strand of sanity that separates genius from madness. You can easily tell when someone is afflicted with one — or both. It’s in the eyes. And as his eyes dart mischievously, Dunehoo appears to possess traces of at least one of the traits.

It’s not the first time I’ve seen these restless eyes. Onstage, Dunehoo’s boyish face is very much that of an animated frontman. He is all wild eyes and wildly catchy riffs, even as he delivers somber, pensive lyrics disguised in the brown-paper wrapper of indie pop and tied up with guitar strings.

But tonight he and the rest of the members of Doris Henson are merely gracious hosts offering me a can of Old Style and a chair in a living room cluttered with furniture, instruments, bicycles and the familiar detritus — Taco Bell packets on the coffee table and crumpled beer cans beneath it — of a musician’s bachelor pad.

Not that they aren’t wary of their visitor. Reporters have only just begun to show up at Doris Henson’s front step. And tonight, the band’s appearance at the South by Southwest music festival and the release of its debut, Give Me All Your Money, are still two weeks away. My initial questions are met with apprehension, four-word sentences and nervous laughter. The band members seem a little … what’s the word?

“Skeptical?” guitarist Jamie Zoeller says, laughing. “Oh, definitely. It’s part skepticism and part excitement. Whenever anyone asks how the band’s doing, my answer is ‘I’m not sure yet. Ask me in a few months.'”

Money was recorded nearly a year ago as a local Anodyne Records project before Washington, D.C., label DeSoto Records scooped up the album. Previously, the Doris Henson logistics — scouring for media coverage, booking shows — were left to Dunehoo. But with DeSoto in its corner, the band is suddenly endowed with the small amenities that indicate an act is moving on up.

“Are we expecting big things on the horizon?” Dunehoo asks rhetorically. “I think we’re just expecting things — besides touring to [play for] no one. Just having a publicist, having a booking agent and radio promotion — those are all things that I don’t think any of us has experienced before. It helps substantiate the effort. It frees me up a bit to have a little faith, to feel a little more confident about our prospects.”

The prospects are solid. After the band’s South by Southwest appearance and this Saturday’s album-release show at the Brick, Doris Henson hits big cities — Denver, Seattle, Los Angeles — before joining indie stalwart And You Will Know Us By the Trail of Dead for three shows, including an April 27 stop at The Granada.

Moseying down the Trail of Dead would be a minor entry in a “What I Did on My Spring Break” essay if Money lacked musical currency. But the album is filled with gleaming pieces of ’90s underground rock and ’70s garage pop. “The Most,” “A Dark Time for the Light Side of Earth” and “Big Future” make for a viciously delicious one-two-three punch in the album’s beginning stages, and “Sidestepping” provides a coda that shoves Money (and Doris Henson) out of the shadows and into a spotlight. The glare still requires some adjustments.

“It’s kind of a touchy thing to talk about — but the truth is, we’re always checking [for reviews] online,” Dunehoo says. “We had positive stuff come across at first, and now we’ve had a couple negative things. A bit of it has been touching in a saddening sort of way, but I’m real sensitive … [and] a big asset of the band is the live performance, and that’s not going to easily transfer to somebody who has no idea what this band is.”

But getting anyone to shows away from home hasn’t been easy. Doris Henson has been met with a muted response outside Kansas City, fueling the band’s reluctance to count chickens before they’ve been hatched — and embraced — by strangers.

“I will beat this into the fucking ground — we need a crowd [outside of Kansas City],” Zoeller says. “It hasn’t happened yet. It needs to happen … we need to have an audience to perform in front of so we can at least see if what we’re doing is worth anything.”

That frustration has occasionally put the group’s typically amiable members on edge. The uncertainty bred by sparse — or, worse, indifferent — crowds muddles the band members’ desire to discover whether they’re breaking through the wall that separates a regional act from a national draw or just beating their heads against it.

“If reality television has taught us anything, it’s that if you keep people in a close space for a long time, an argument is going to happen eventually,” trombonist Mike Walker says. “It happens, but we’re still here.”

Still, getting there is the primary concern. All five members have served time with other bands. All have spent the majority of their adult lives working pay-the-rent jobs, sleeping on floors on tour and muscling through the rigors of a working band. And all are eager to find out if their work will amount to something substantial.

“It’s odd to feel like, at this point in your life, you’re starting from scratch,” the 28-year-old Dunehoo says. “A lot of those moments that might have been more tolerable in our first bands are less tolerable now.”

Doris Henson has been together for three years and two albums — a sliver in musical chronology — but each member seems conscious of his steadily dropping window of opportunity. Particularly bassist Byron Collum — the band’s elder statesman at age 34 — who was a member of the celebrated Kansas City prog-rock band Giant’s Chair before that group disintegrated in 1997.

“I’m getting too old for this,” Collum says with a wary smile. “I’m not paying my dues a third time.”

So, then, what would be the worst possible fate for Doris Henson?

“Besides a van explosion?” Zoeller cracks.

“What if we get known as the band that hates babies?” Walker adds.

OK, the members are quick to poke fun at themselves — Dunehoo included — but the band’s frontman is clearly its introspective conscience.

“That totally kills me, the idea of having anything be over before potential is reached,” Dunehoo says. “That’s nothing short of tragic in my eyes, not being able to have your aspirations or dreams about something materialize. I feel so emotionally invested in what’s going on here that it kills me to think about that.”

And it isn’t merely emotion that Dunehoo has invested in Doris Henson. He is also the band’s driving creative force, feverishly tinkering with the music and lyrics as if someone were pressing a Glock to his temple.

“Matt’s a fucking workhorse,” Zoeller says. “Every once in a while, we start a new song from jamming in the basement, but most of the time it’s an idea of his — maybe a whole song he’s written, maybe a whole album, maybe just a riff — and we take it from there.”

Dunehoo has a penchant for penning straightforward rock songs — notably “Big Future,” “The Most” and “The Power” — that are deceptively cheerful morsels of melodic bliss with lyrics that hint at the solemn anxieties lurking beneath an otherwise buoyant personality.

“I was perfectly built to be in an emo band,” Dunehoo says. “I can’t get away from an underlying idea of sadness, perhaps even melodramatic behavior…. [But] I don’t want the music to be humorless. I can be sad and still have an element of humor. If I’m completely maudlin, that’s not going to do any good to anyone, especially me.”

He manages the balance onstage by delivering soul-spelunking lyrics with exalted enthusiasm and a mischievous smile. But there is both introvert and extrovert apparent in those active eyes. It isn’t Jack Nicholson’s homicidal glee. And it’s not entirely the gleam of a genius, either. Rather, it’s indication that Dunehoo and Doris Henson are propelled by the traces of madness every musician cultivates in an effort to achieve genius. And the tortured drive that comes with it.

“I feel a tremendous amount of urgency. I mean, that’s just how I am,” Dunehoo says. “I feel like I put music and performance as that standard by which to judge what I’m capable of, what I’m worth. It drives me crazy all the time. I feel like I should be doing more always. That’s why I really want to get on the road. I want to be doing it. I want to be doing it so that I know I’m trying. It makes me feel kind of paranoid and fragile when it’s not being put to the test.”