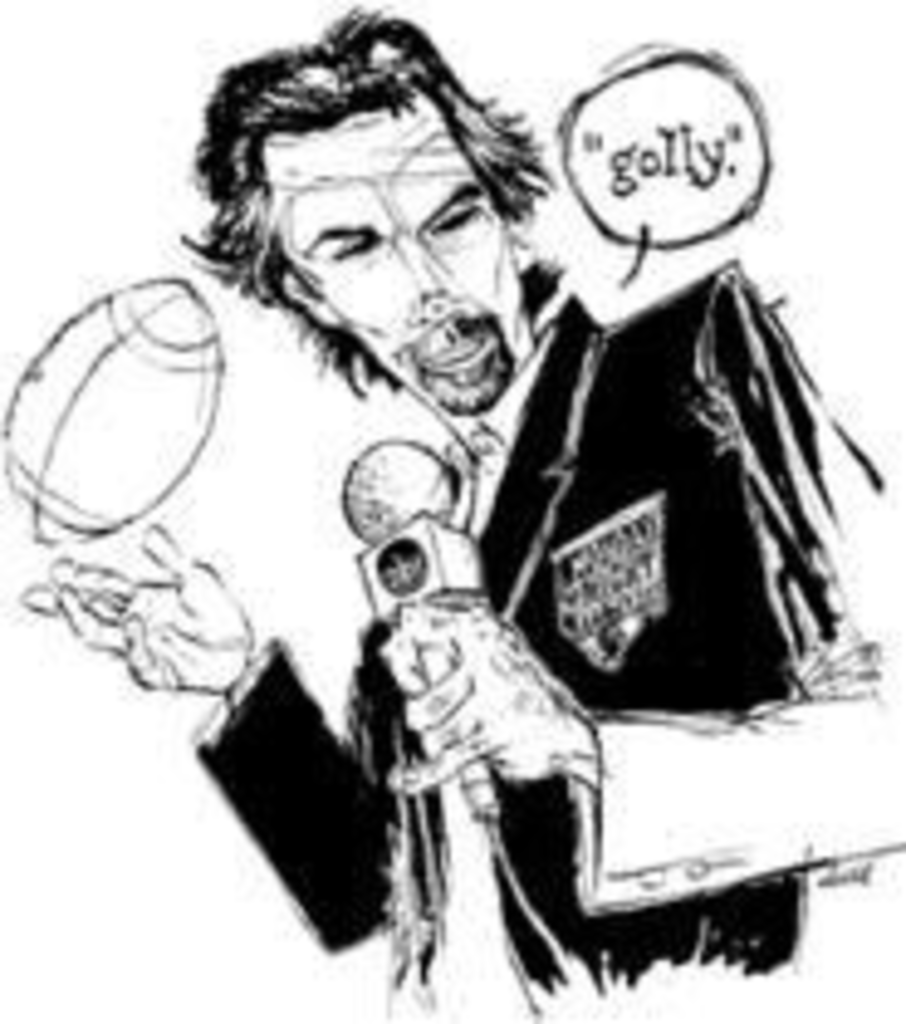 Way back in 1970, when instant replay was still a novelty and TNT, ESPN, the NCAA, and many other alphabet combinations made sure there was 24-hour football from late July until the end of January, ABC Sports had the audacity to invade prime time with Monday Night Football.

But this was not football, Al DeRogotis-style, with humorless, cliché-ridden commentary and dry, mind-numbing analysis. This was show biz, with three commentators who invited damnation from the football gods by actually having fun on the air. With first Keith Jackson, then Frank Gifford, acting as play caller and straight man to the riotously funny wars between Howard Cosell’s stogie-sucking, Ivy League intellectualism and Don Meredith’s down-home, “I’ll bring you off your high horse” humor, fans were captivated regardless of whether they gave two hoots about the game on the field.

A snazzy Billy Preston jazz piece to open the action. A world-class collection of mutton chops. Meredith singing. Cosell with his unforgettable, spine-tingling commentary during the halftime highlights of the weekend NFL games. Gifford, Meredith, Cosell. The holy trinity of MNF. They took risks instead of polls and created a national sensation, sending restaurants and movie theaters into Monday night depressions.

Over the years, Don Meredith begot Fran Tarkington and Joe Namath, who begot Dan Dierdorf. Keith Jackson became Gifford, who scooted one seat over to make way for Al Michaels. MNF was still an institution, but nothing like its raw but wildly entertaining early years. Finally Dierdorf and Gifford departed, and then last season came Boomer Esiason — and what did we have? Al DeRogotis again.

Ratings trended like Commodore computer stock. Then the powers that be decided something drastic had to be done. Such candidates as Rush Limbaugh were considered. That would have been a riot. “You can trace the decline of the 49ers to Clinton’s bleeding-heart liberal policies,” Limbaugh might say in a moment of typical originality.

Rumor has it that they considered a new pregame show, called Who Wants to Be a Monday Night Football Announcer? Winners would get to announce the game, while losers would be sent off to announce the WNBA or forced to write a two-page essay on why one no longer can tell the difference between professional wrestling and professional boxing, except that wrestling has better script writers.

Another idea considered, then wisely tossed, was Monday Night Football Survivors. In this scenario, all the candidates would start out the season. The announcers in the booth would be forced to live only on week-old press box food, and one would be voted out each week. The sideline announcers would wait until a single microphone would be tossed on the field, then the hopefuls would kick one another’s tails until one emerged a winner. They should have done that last year. I think Lesley Visser could have taken Lynn Swann, especially if he threatened to mess up her hair.

But no, they finally went with Dan Fouts, the former Charger QB, and Dennis Miller. As Dave Barry would say, I am not making this up. In addition, Melissa Stark and Eric Dickerson will roam the sidelines. Stark will bring to Monday Night Football what Anna Kournikova brings to tennis, while Eric Dickerson will have plenty of on-screen time to model his designer goggle collection.

Oh, I’ll still watch the damn thing when the season starts Sept. 4. I still get a kick out of Hank Williams Jr. sobering up long enough to ask us if we’re ready for some football. (Don’t ask your friends this question. ABC has copyrighted this phrase and you could be sued.) I’ll still enjoy watching the football. Al Michaels is as good as they come and Dan Fouts is talented and qualified. Sorry, Miller, you’re funny but you’re no Don Meredith or Howard Cosell. And taking the “F” bomb away from Miller (he’ll be replacing it with the code word “golly”) is like taking the Sledge-O-Matic away from Gallagher.

Nice try, ABC. But methinks you try too hard. Who else do you have waiting in the wings? Britney Spears? Stuart Little?

Inside Pitches
ð Why am I continuing my boycott of “professional” boxing? Just look at the quotes after Mike Tyson’s — ahem — fight when he clubbed another sucker, Lou Savarese, into a coma after 38 seconds. Said Tyson, referring to his next desired opponent, Lennox Lewis, “I want to eat your children. Praise Allah.” Mike Tyson makes John Rocker look like Mr. Rogers. Tyson claims to be the Second Coming of Sonny Liston and Jack Dempsey. If Mike Tyson in his prime met Muhammad Ali in his, Tyson indeed would do a great imitation of Liston.

ð That yawn you recently heard that registered on the Richter scale in the Midwest occurred when somebody mentioned the regular season NBA (Nobody Bother us till After the playoffs start). Part of the problem is that NBA gurus get an “F” in geography. Draw a circle by connecting Minneapolis to Denver, to Dallas, to Atlanta, to Indianapolis, to Chicago, then back to Minneapolis. You can try to find an NBA in the circle. Not in Louisiana, which has the NFL. Not in Missouri, which has two NFL teams, two Major League Baseball teams, and the NHL. The Midwest is the Bermuda triangle of the NBA.