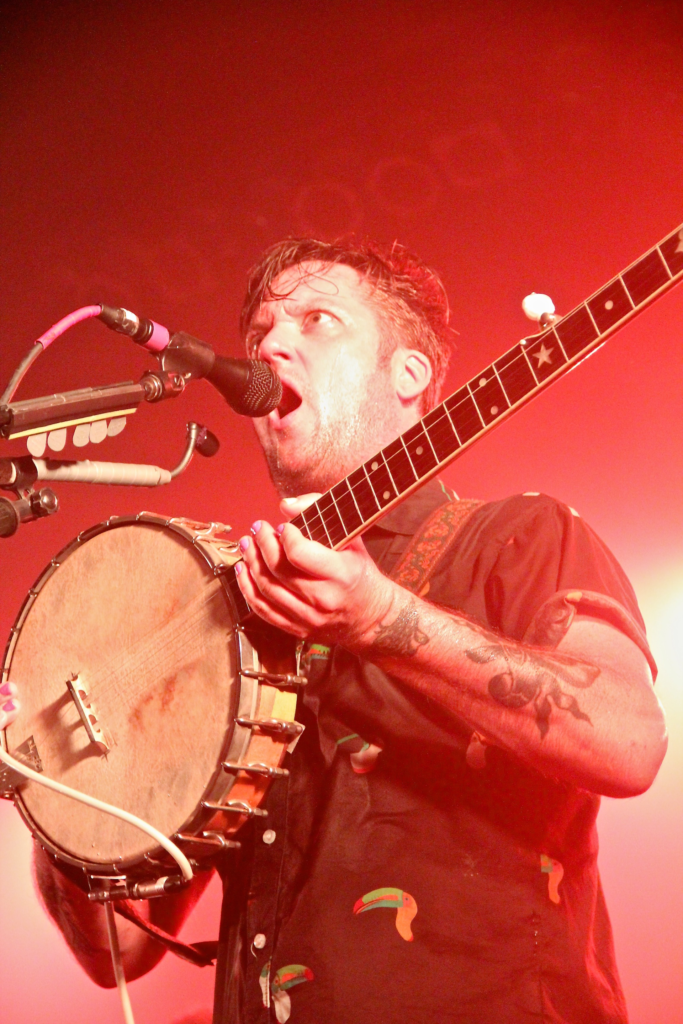 “I used to spend a lot of time in Lawrence, Kansas,” Modest Mouse frontman Isaac Brock told his audience, about 30 minutes into the band’s nearly two-hour set last night at Liberty Hall. Brock smiled, a bit like he was surveying a room of old friends, and noted: “I don’t really remember what we did. Drink? That river is new, right?”

Perhaps it was Brock’s familiarity with Lawrence, or the packed and intimate setting. (On this tour, the band seems to be playing smaller and/or unusual venues off of their typical circuit, including a Botanical Garden in Idaho and a brewery in Montana.) But Brock and the band seemed to be both more at ease and having more fun than in recent KC and Lawrence-area outings, including their last appearance at the Uptown. Whatever the case, last night’s Liberty Hall audience responded massively, drowning the stage in praise at the end of each song, also causing the wooden floors of Liberty Hall to bow and shake. 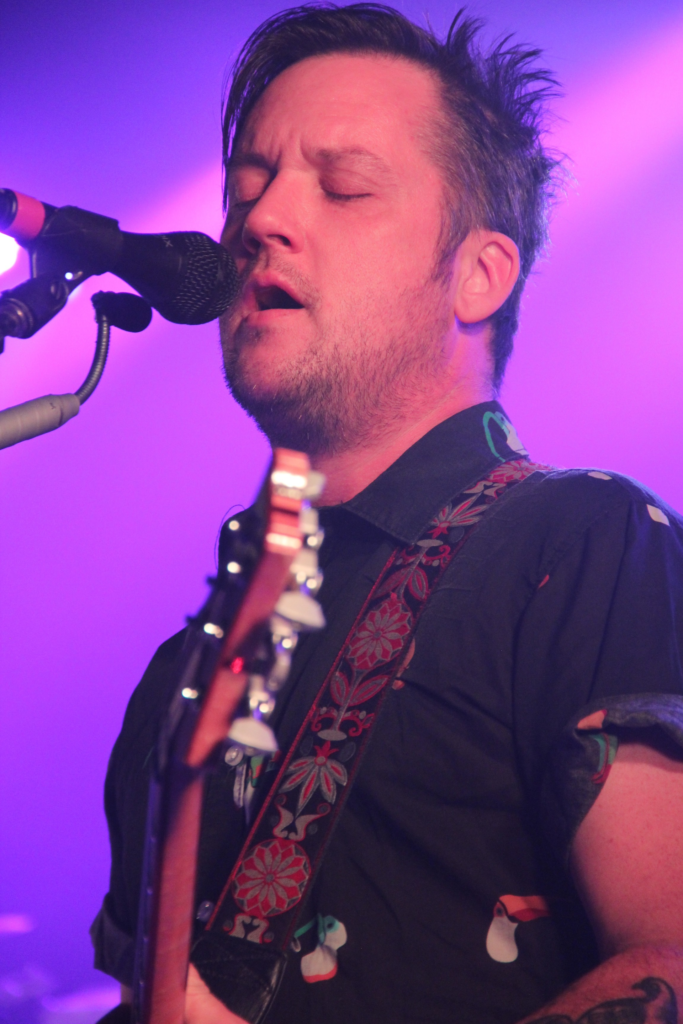 Before the set began, the audience was primed with dance music, including a rapturous audience singalong to A Ha’s “Take On Me.” The band came to the stage just after 9:30, and opened light and tight, with “Missed the Boat,” “Sugar Boats,” and “Ocean Breathes Salty,” one each from the band’s three most recent releases.

“I love it here,” Brock shouted, beginning his night smiling. “You can breathe here.”

Shortly after the band’s last Kansas City appearance, it released Strangers to Ourselves. That album comprised about half of last night’s set, and while it didn’t excite many critics at the time, the material has an explosive quality when performed live, particularly with “Lampshades on Fire” and “The Ground Walks, With Time in a Box.”

That, added to the new material’s expressive guitar bends and lyrical Brockianisms (especially “The Ground Walks…” lyrics: The world composes with his / Shirt tails wrinkled hanging out / Bang us together see what sort / Of sounds we make right now), makes Strangers to Ourselves feel timelessly part of the Modest Mouse canon.

At this point, it seems Modest Mouse has encountered the career-band’s dilemma: You can create well-executed songs that reflect what you’ve built a legacy on, or destroy the pillar of your success and start anew. Under Brock — at least with what the band has released thus far —  Modest Mouse is choosing the former. In a live setting, it’s hard to argue this wasn’t the wiser choice. With 20 years behind them, Modest Mouse has definitely created its own sound — one last night’s audience came for, and relished.

About halfway into the band’s set, noticing how sweaty those in the audience were becoming, Brock picked up the small oscillating stage fan by his feet, and basked in it like a supermodel in a shampoo commercial, joking: “The summers are kinda fuckin’ hot here, but the winters are kinda fuckin’ cold. But whatever. You guys get to go home for holidays and stuff. Nobody lives here.” The audience, most of whom on the floor were of college age, murmured. 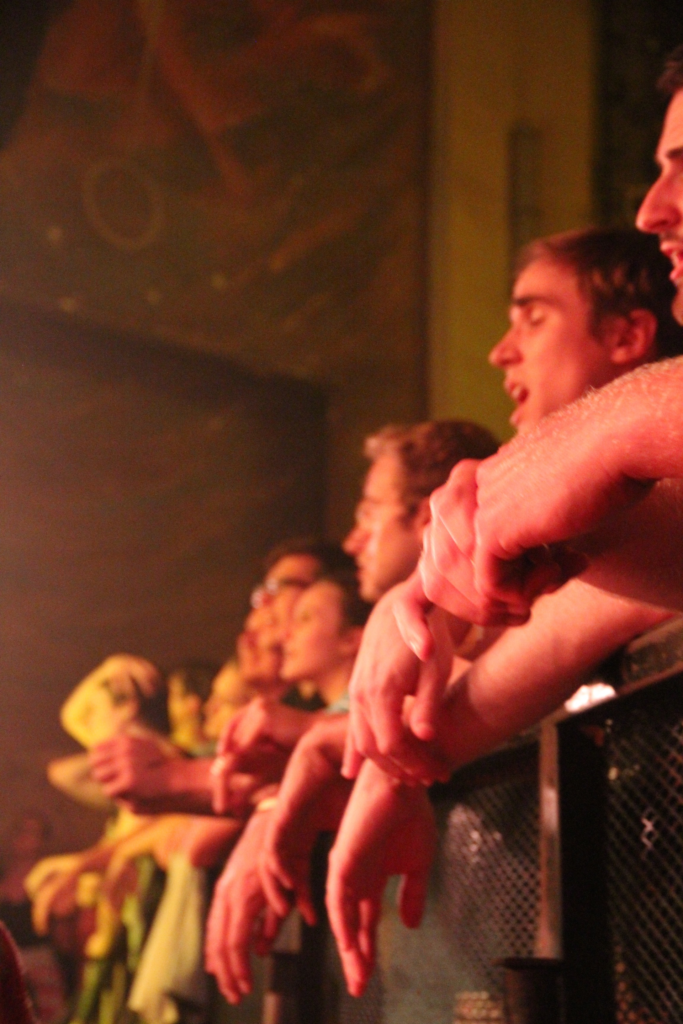 The most powerful songs of the evening were not the most obvious. The guitars, coronets and strings on the bouncy, driving “Dashboard” are bruising live. “King Rat,” an unusual (and difficult) song for the band to perform, swelled to a chaotic explosion of strings and horns, which played second only to Brock’s stomps and savagely executed yowls. The slightly discordant and reverby swells on “The Tortoise and the Tourist” can be felt inside of your body. The band is excellent, and as loud as they are able to execute on an impressive variety of instruments. Two drummers are now a staple of the act.

Much is made of Brock’s unpredictability, or his moodiness. Due to what seems to be a fondness for the area (or perhaps, simply, the convenience of being in the middle of the country), Kansas City and Lawrence are frequent stops. In the last four local appearances, there has been no bad attitude or outbursts — no irritability, even, outside of some slight irritation at sound problems at the Uptown last summer.

What seems more to be happening is the band as a whole simply gets better. At this point, the Modest Mouse endeavor is quite clearly is a career for most (if not all) members of the band, and the seriousness with which they work is apparent. Brock seemed to experience some pain in his shoulders or neck early on in the show last night that lasted throughout the evening (had I not been standing close to the stage I likely wouldn’t have noticed), but whatever he experienced wasn’t allowed to affect the show. For an hour and 50 minutes, the band wailed, all nine of them crammed on the small stage, soaking up the atmosphere of a place that by now hopefully feels like home. 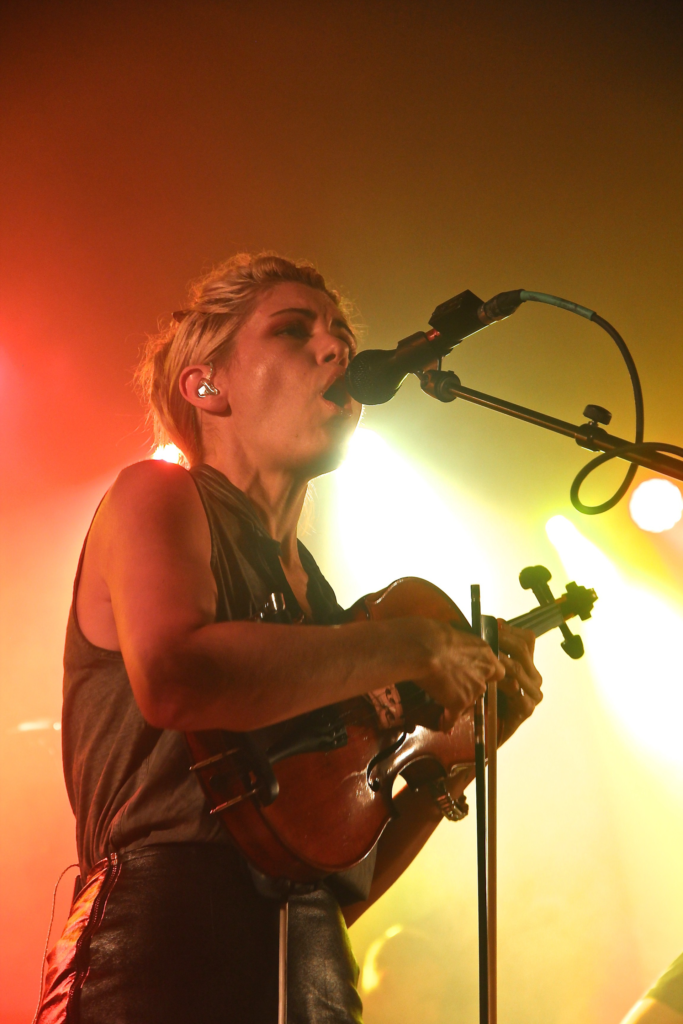 Leftovers/PS: There has been a lot of press lately about photography policies, specifically with regard to restrictions put on photographers by artists including Taylor Swift and the Foo Fighters. Typical policy for photographers is to be permitted to shoot for three songs, and often there is a rights waiver to be signed. Last night, photographers were told we could watch and shoot the entire show if we wanted, from the pit. No waivers. The freedom was so unusual it was almost baffling. Your move, Taylor.

Setlist:
Missed the Boat
Sugar Boats
Ocean Breathes Salty
Dashboard
Heart Cooks Brain
Lampshades on Fire
King Rat
Bukowski
The Ground Walks, With Time in a Box
Coyotes
The Tortoise and the Tourist
Talking Shit About a Pretty Sunset
Of Course We Know
Float On
Satellite Skin
The View
__________
Fire It Up
Night on the Sun
The Good Times Are Killing Me