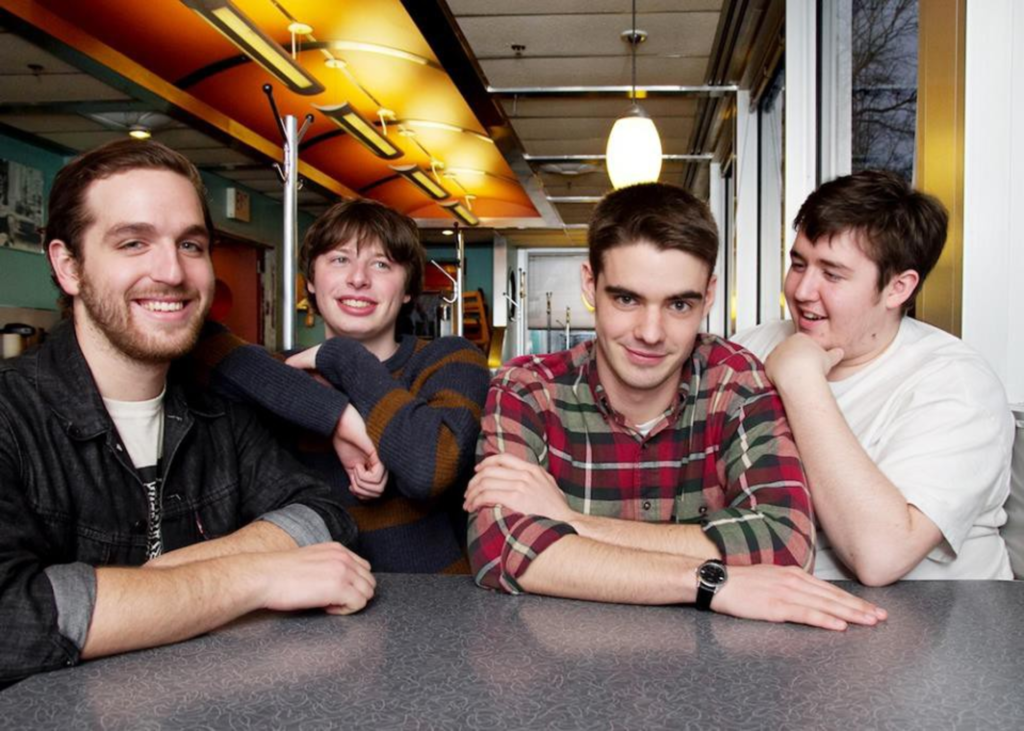 “Modern emo” seems to be the catch-all term for Philadelphia quartet Modern Baseball, and that phrase kind of fits – the songs have pop hooks with a distinctly confessional edge to the lyrics. But the band’s roots as an acoustic duo has a definite influence on the foursome’s sound, and that come through loud and clear on Modern Baseball’s new album, You’re Gonna Miss It All. It’s an updated take on the sound which the Get Up Kids, Saves the Day and so many other bands brought up from the basements in the late 1990s. It’s refreshing, but still warmly familiar.

We spoke with the band’s bassist and recording engineer, Ian Farmer, about Modern Baseball’s new album, balancing touring with schooling and the band’s sudden rise to prominence.

The Pitch: I’ve been really enjoying You’re Gonna Miss It All. It’s nice to see that it takes the sound I enjoyed so much on Sports, but really branches out. Was branching out an intentional thing for the band, or did it just sort of happen in the process of recording the album?

Ian Farmer: Oh, man. That’s a really nice compliment. I think, the main thing is when Brendan [Lukens] and Jake [Ewald] write songs for Modern Baseball, they try to be as honest and as original as possible. So, I think they just grew as songwriters over the year or two years that took place between writing the songs for Sports and the songs for You’re Gonna Miss It All, and it kinda shows a lot.

I mean, you can definitely tell which are Jake’s songs – which are really heavy on the second half of the record – which are more progressive. Not in the sense of prog-rock, but songwriting-wise, he progresses the song with more than like, verse-chorus-verse. When we went into the studio, we just kind of had a better idea of what we were doing.

There’s a lot in terms of modern technology and how it affects things in Modern Baseball’s songs. Both obvious things, like “@chl03k” from Sports, which is talking to somebody on Twitter, but also the first track on You’re Gonna Miss It All, “Fine, Great,” which has the line “Your Instagram stopped working.” How little intrusions of technology kind of fuck things up, for lack of a better word. Do you find that social media and technology let you stay connected when you’re on the road – taking that contact with fans and extending it, so that it doesn’t have to begin or end at a show?

Yeah, it definitely does. I think, personally, I go through periods where I’m like, “Oh, yeah – I want this to connect me to everyone!” And then, I go through periods where I’m like, “Ugh, I think I’m going to make my account private for a little bit.” Just, because being connected with everyone can be a bit overwhelming, but it still is definitely fun. When we’re traveling around the whole country and, I guess, now even the whole world, it’s a great way to stay connected we’ve met all over, too, which is part of the reason that I love it so much.

As much as I feel that I’m never completely alone – which is a good thing, and can kind of be an annoying thing – I like it a lot.

You mentioned touring the entire world. Has becoming a band on such a scale so fast affected you a bunch? Like, are you guys still in school?

It’s actually pretty funny, because the answer is yes. Our school’s been cool enough – and we’ve been working with our advisers – that we can alternate taking off school and going back to school. We kind of worked our asses off in high school and early on in college, so Jake and I are on track to – our school has a weird trimester thing – we’re on track to graduate a trimester early. So, when we’re all done, we’ll have taken off four terms and still graduate early, because we went back to school for a summer, too.

It’s really busy. Definitely a lot of hard work. It’s certainly quite a bummer to go play, and travel Europe, and around the country with a lot of really good friends, and then come back, and you’re in, like, Intro to Finance, and you’re just like, “What is this? I don’t care …”

But we’ve just been in school for so long, and we’ve invested so much money into it, that it doesn’t make any sense to us to drop out, especially if we don’t have to. Gotta get the degree.

Does the band count toward anything? Have you been able to turn it into independent study?

If only. That would make things a lot easier. But, because we are in a music industry program, and we are kind of music heads already, classes are, kind of – we’re already experiencing everything that’s going on, before we get into our classes, so the classes aren’t so difficult.

Do you find that your classes have helped you, in terms of the band and touring?

Actually, very much so. Those first couple of years, where we were learning all the fundamentals about the music industry kinda helped us out a bunch, so that we weren’t completely clueless when things suddenly and surprisingly just started to happen for Modern Baseball. We knew how to go about things, and our manager – who has been with us since the same time Sean and I joined the band – is also going to Drexel for a similar sort of major. Between all of us, basically, as every decision came, we would just get together and talk it out – talk about what we have learned and stuff – and make the decision from there.

That’s the most practical application of a college education I’ve ever heard of.

That’s why we can’t be too bitter about still being in school: because it’s taught us so much.