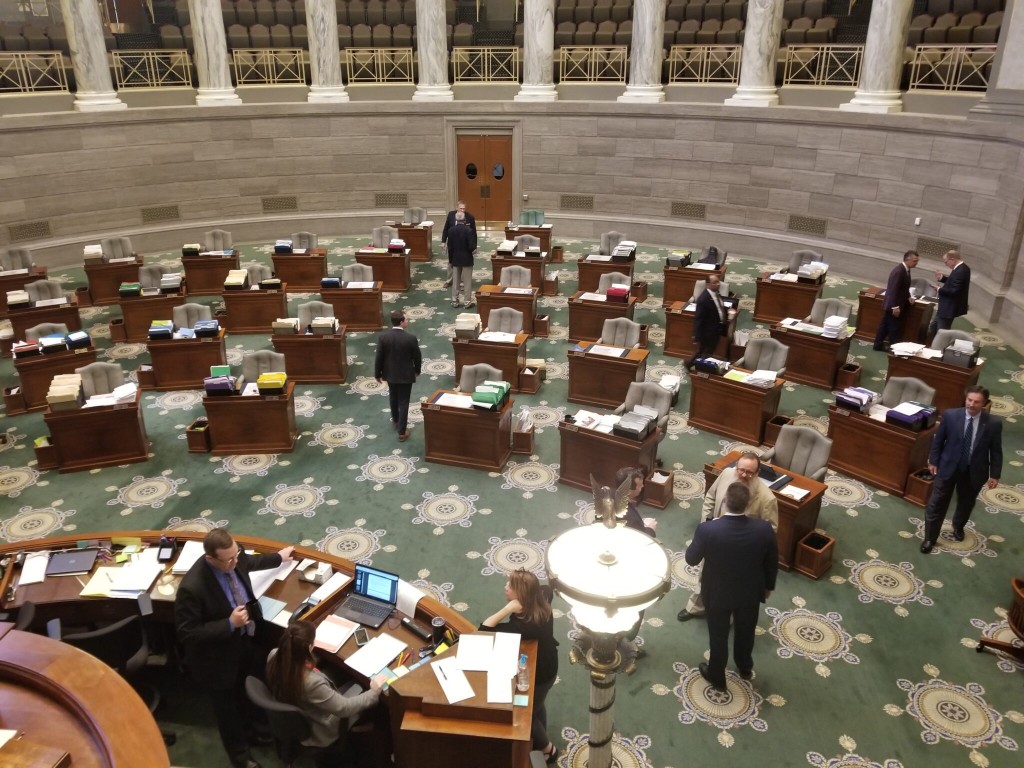 As the redistricting debate stretches on, it remains to be seen if it will rival some of the chamber’s longest filibusters. // Rudi Keller/Missouri Independent

A roughly 31-hour filibuster in the Missouri Senate paused early Wednesday morning, when the chamber adjourned without taking action on the state’s new congressional map.

Just after 12:20 a.m., Senate Majority Leader Caleb Rowden, R-Columbia, motioned for senators to adjourn until noon Wednesday, when the redistricting debate is expected to resume.

Before the Senate are the House-passed versions of redrawn Congressional districts, which would maintain Missouri’s current partisan breakdown of six GOP seats and two Democratic ones.

Senators returned to the original House proposals after Sen. Mike Bernskoetter, R-Jefferson City, rescinded his Senate version of the map — which was identical to the House’s except for the addition of an emergency clause.

The over 31 hours of discussion left Missouri senators essentially right back where they started when the redistricting debate began Monday at 5 p.m.

It was the first time the congressional map has been formally brought up for debate on the Senate floor this year, and senators are set to let the issue eat into yet another day of legislative work. All of Wednesday’s scheduled committee hearings were canceled as of Tuesday evening.

If no changes are made to the House-passed 6-2 map, then senators could send the proposal to Gov. Mike Parson for approval. If amendments are added by the Senate, the map will need the House’s approval again.

“This map also seems to have more county splits versus some of the other maps that I’ve seen, and again, like I said, all the maps start to run together,” said Sen. Denny Hoskins, R-Warrensburg, who has advocated for Missouri’s two military bases to be kept within one district.

However, debate quickly turned back to killing time, as Hoskins read song lyrics for over an hour, that ranged from songs by Fall Out Boy to Taylor Swift and Johnny Cash, and Sen. Eric Burlison, R-Battlefield, read from Republican U.S. Sen Josh Hawley’s book, “The Tyranny of Big Tech.”

Senators voted down a proposed 7-1 map Monday night. Republican lawmakers in opposition to the conservative caucus’ call for adding another Republican-leaning seat have warned that a 7-1 map may eventually shift in Democrats’ favor and that such a plan could risk a court intervention.

Sen. Mike Moon, an Ash Grove Republican who is running for U.S. Congress, said passing a 7-1 map would help ensure that Republicans could regain the majority in the U.S. House of Representatives.

“Some are asking for a strong 6-2, well how about a weak 7-1 — still a 7-1, it allows the state’s past voting history to be reflected across the state and the congressional districts,” Moon said.

“It engages people that believe a 7-1 map in a bad year could become a 5-3 map,” Schatz said, referring to concerns a Republican seat could sway to Democrats in the future.

Schatz said he had also spoken with a couple members of Missouri’s congressional delegation who were satisfied with the map passed by the House.

Through Tuesday afternoon, supporters of a 7-1 map decried Rowden’s proposal that he cast as a compromise, calling it a “thumb in the eye” and raising whether it was “motivated by personal animus.” They questioned why they had been left out of negotiations.

“It seems like part of the body feels like they got a good compromise,” said Sen. Bill Eigel, R-Weldon Spring, who’s proposed 7-1 map was voted down Monday night, “but a significant portion of the chamber has been left out of it.”

The redistricting discussion was expected to be contentious, and it remained to be seen if the debate will rival some of the chamber’s longest filibusters.

In 2016, Democrats stalled a vote for 39 hours on a proposed constitutional amendment that would remove penalties for those who cite religious beliefs as the reason for denying certain services for same-sex marriages.

Prior to that in 1999, four Democratic senators had filibustered for 38 hours over a five-day period to oppose an abortion bill, The Associated Press reported.

For more than 27 hours in 2019, Conservative Caucus members blocked the passage of $50 million in tax credits for General Motors, a key plank of Gov. Mike Parson’s agenda that year.

After deliberations continued overnight Monday, Rowden proposed bolstering the GOP’s strength of the 2nd Congressional District, represented by Republican U.S. Rep. Ann Wagner, by taking in all of Jefferson County and portions of St. Charles and St. Louis counties.

The proposal would also include a boost in the minority representation of the 1st Congressional District, represented by Democratic U.S. Rep Cori Bush, as Democrats had pushed for by extending westward into Maryland Heights, Creve Coeur and Westwood.

Rowden acknowledged it was impossible to please every lawmaker with the plan.

“At some point you find a meaningful movement in a direction that some folks had voiced support for, in terms of making some changes in CD 2, and you try,” he said.

Sen. Rick Brattin, a Harrisonville Republican who is running for Congress, said he felt the proposed maps were “atrocious” and that there was a disconnect between what was discussed in behind-the-scenes negotiations versus what was rolled out on the Senate floor.

“I just find it to be a little bit of a parody that here we are having to filibuster our own party as a result of that,” Brattin said, before reading articles from the conservative satirical news site The Babylon Bee.

The annual Statewide Lincoln Days, a gathering of Missouri Republicans, is scheduled to be held in St. Charles this weekend, and many GOP lawmakers are expected to attend. But Sen. Bob Onder, R-Lake St. Louis, said if needed, he will remain to debate through the weekend.

“When a group of senators… is targeted to be run over, that group of senators will fight back,” Onder said, later adding: “If we’re still going on this map on Saturday or Sunday, I’m okay with that.”