Under the new law, voters will be required to present a government-issued photo ID to cast a ballot for the November election. 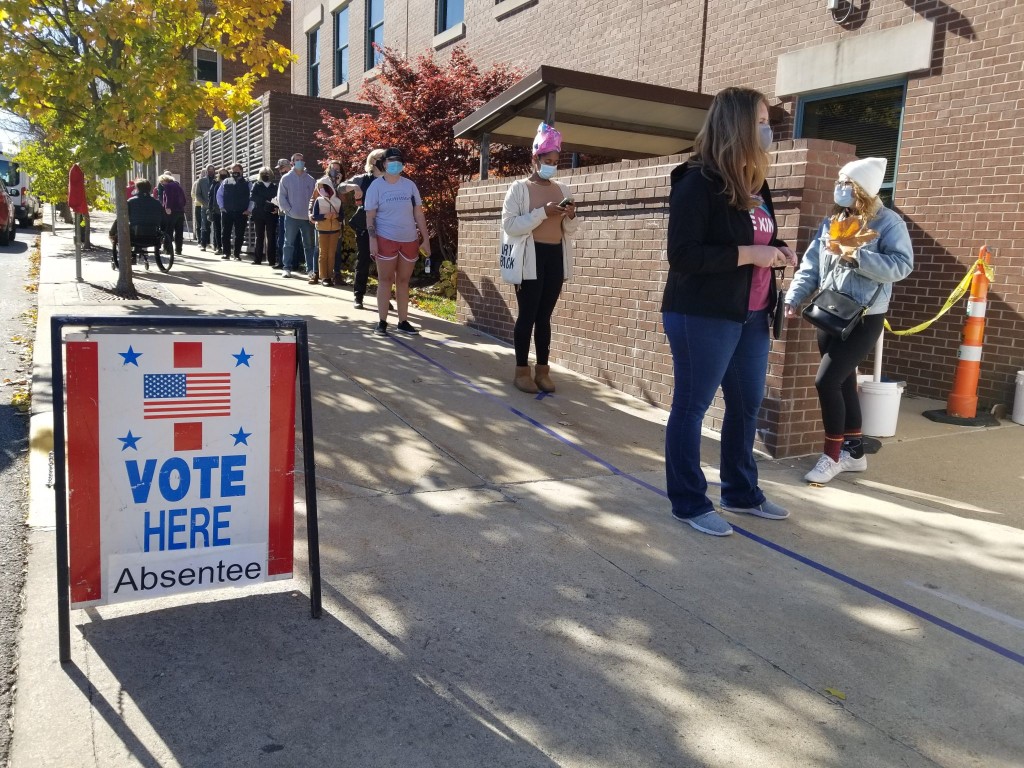 Voters lined up outside the Boone County Government Center to cast absentee ballots in November 2020. // Photo by Rudi Keller/Missouri Independent

Voting-rights advocates filed a lawsuit Tuesday arguing that a new law requiring Missourians to present a government-issued photo ID to vote is unconstitutional.

While lawmakers have approved voter ID laws numerous times, and voters signed off on putting it in the state constitution in 2016, the proposal has never withstood a legal challenge.

The voter ID law is set to go into effect next week. The lawsuit, filed in Cole County Circuit Court, asks for a preliminary injunction to stop Missouri from enforcing it.

Unless the court intervenes, the changes will be in effect for the Nov. 8 general election.

“So-called voter ID laws have always been a part of a deceitful agenda by politicians in power to stoke fear and reduce participation of registered voters in elections without evidence of a problem,” said Luz María Henríquez, executive director of the ACLU of Missouri, who filed the lawsuit along with the Missouri Voter Protection Coalition.

The lawsuit challenges provisions in the new law that limit the specific forms of photo identification to vote in person at the polls and in person absentee.

Currently, voters can present a variety of different forms of identification at the polls, including some that don’t include a photo, like a utility bill or voting card. Under the new law, registered voters would either have to get a government-issued photo ID or cast a provisional ballot on Election Day.

The provisional ballot would be counted only if the voter returns later that day with a photo ID or if election officials can verify their signature based on voter records.

In the November 2020 election, only 2,139 provisional ballots were counted out of 5,256 that were cast, according to the Missouri Secretary of State’s Office. There were 2,407 ballots rejected because the individuals were not registered or eligible to vote, according to secretary of state records.

There were 920 people who arrived at their right polling place but didn’t have the correct form of ID, so they cast a provisional ballot. Of those votes, 484 were counted. Records do not specify why 375 ballots were rejected, but 40 were cast out because the signatures on the ballots didn’t match the signatures in the voter registration records.

“The ability of all Missourians to cast a ballot lies at the heart of a functioning democracy,” said Denise Lieberman, director and general counsel of the Missouri Voter Protection Coalition.

The lawsuit was filed on behalf of the League of Women Voters of Missouri and Missouri NAACP. On Monday, both groups announced a separate lawsuit challenging other provisions of the new elections law pertaining to absentee voting and voter registration.

About 137,700 registered voters in Missouri did not have a state-issued identification in 2017, according to an analysis from the Secretary of State’s Office. Another 140,000 voters had expired IDs, and 2,000 more voters had forfeited their driver’s licenses.

In that same ruling, the court considered the state’s request to strike the non-photo ID options altogether – which is what the new law would do – and concluded that it posed “constitutional concerns and could not have been adopted by this court.”

While the state is supposed to provide IDs to people for free if they can’t pay, there are still costs involved in getting the documents needed to obtain the ID, the Supreme Court’s ruling noted.

Also, each person only gets one free ID.

St. Francis Xavier College Church in St. Louis is the only program in the state that helps a significant number of people obtain the documents they need to get a driver’s license.

The church’s ID and birth certificate program, which is the cornerstone of its social ministry, sees about 60 to 80 people every Tuesday. On average, they help 3,400 people a year, helping them obtain about 2,200 Missouri IDs and 1,700 birth certificates.

And they cover the costs to obtain these documents, which totals about $50,000 every year, Christine Dragonette, director of social ministry at the College Church, told The Independent last year.

We will do everything in our power to make sure the rights of Missouri voters are restored, and everyone can have their vote counted,” said Nimrod Chapel Jr., president of the Missouri State Conference of the NAACP.

In 2006, Missouri became one of the first states to attempt to enact a law where only a state- or federally-issued ID would be acceptable to vote. After being approved by lawmakers, the court deemed it unconstitutional because there was no evidence of voter fraud and it infringed on people’s right to vote.

So voter-ID proponents focused on changing the constitution itself.

In 2011, lawmakers placed a voter ID amendment on the ballot, but the measure was derailed by a lawsuit filed by the ACLU of Missouri and Advancement Project.

In 2016, a photo ID amendment finally made it to the ballot and was approved by voters that allowed someone to cast a ballot without a state-approved photo ID only after signing an affidavit under the penalty of perjury.

However, the Missouri Supreme Court struck down the affidavit because it deemed it to be “misleading,” and therefore unconstitutional.

Critics of voter ID laws say the requirements disproportionately impact voters of color, the young and the disabled.

“This bill is a major disenfranchisement movement,” said Rep. Joe Adams, D-University City during a House debate in May. “It is to deny people who have fought and denied for this right to vote. It’s an attempt to restrict their participation in the process.”

Proponents of the idea say it’s an effort to prevent voter fraud, though instances of fraud that would be prevented by a photo ID requirement are exceedingly rare.

One study found that between 2000 and 2014, there were only 31 instances of voter impersonation fraud — in which a voter pretends to be someone else at the polls — out of more than one billion ballots cast.

“Our election system is a cornerstone of our Republic,” said state Rep. John Simmons, R-Washington and the bill’s sponsor. “Faith and confidence in the process is a solemn responsibility by voters themselves and those conducting elections. A photo ID requirement is but one common sense measure the vast majority of Missourians support.”