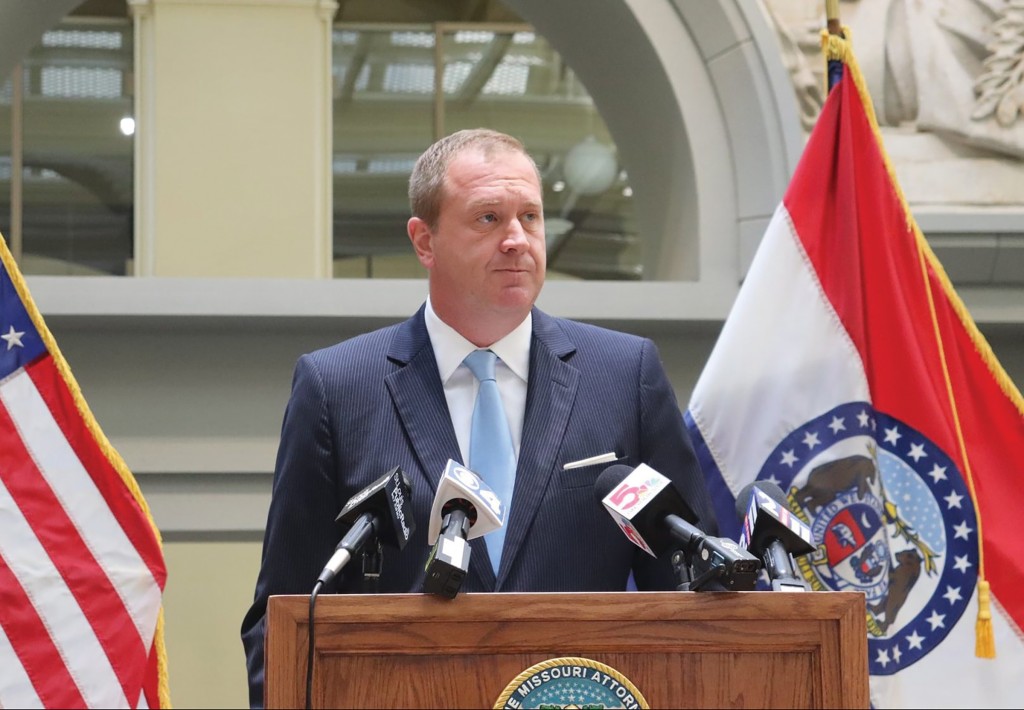 In a world where outrage is the new normal, certain news opening lines can still set one’s teeth on edge.

Like this one: “Today, Missouri Attorney General Eric Schmitt has…”

Take your pick: Sued China. Sued President Biden. Sued your local school board over its mask mandate. Sued Kansas City, St. Louis, and Jackson County over their mask mandates. Filed court motions to keep an innocent man incarcerated. Tweeted something pompous about his gallant fight against “power-hungry” public officials (like unpaid school board members who want to protect people from COVID-19). Sued his neighbor’s new puppy for chewing up his lawn. (Not really, but at this point, who would put it past him?)

Schmitt, a former Missouri Republican state senator and treasurer, became attorney general at the start of 2019 after Gov. Mike Parson appointed him to fill the vacancy created when Josh Hawley was elected U.S. senator.

Hopes that Schmitt, unlike Hawley, might actually use his new job to make Missouri a fairer, more just place, were quickly squashed. Schmitt took active roles in the Republican Attorneys General Association (RAGA), a group that promotes right-wing policies like voter suppression. He even served as its chairman for a while.

In a story that didn’t receive as much notice as it should have, two St. Louis lawyers discovered that Schmitt’s office had been in communication with a fundraising arm of RAGA that promoted Trump’s lie about a stolen election and even urged “patriots” to march on the U.S. Capitol Jan. 6.

Last November, Schmitt officially won election to the AG’s office. By then, people had begun to notice that Missouri’s top legal official seemed unusually cavalier about using taxpayers’ dollars to promote his political career and causes.

There was that bizarre lawsuit he filed against China, claiming that suppressed information about the novel coronavirus harmed Missourians. Legal experts say it has little chance of success, but the litigation could drag on for years.

Schmitt then moved on to Texas, throwing the support of his office behind the Lone Star State’s ridiculous move to sue some swing states that had voted for Biden instead of Trump. He sued the U.S. Treasury Department over regulations regarding COVID funds. He sued the Biden administration over its ban on oil and gas drilling on federal land.

There’s more, but you get the idea.

All of that nonsense, it turns out, was just a warmup. In March, Schmitt announced—on Fox News, of course—his candidacy for the U.S. Senate seat being vacated by GOP Sen. Roy Blunt.

Prior to joining that competitive Republican primary, Schmitt had been spraying most of his legal pellets outside of Missouri. Now he’s turned inward, targeting officials around the state, especially in Kansas City and St. Louis.

Over a few frenetic weeks in August leading into September, the AG’s office filed lawsuits against St. Louis, Kansas City, and Jackson County over mask mandates. It ginned up a class action lawsuit against school districts that try to protect children and staff against COVID by requiring masks. And it hustled to delay a hearing that could result in freedom for Kevin Strickland, the prisoner convicted more than 40 years ago of three murders that Jean Peters Baker, the Jackson County prosecutor, says he did not commit.

On Sept. 2, Schmitt capped off his exhausting headline spree with a letter of “guidance,” advising parents to claim their students were “substantially impaired” in school if they were unhappy about wearing masks.

Kansas City Mayor Quinton Lucas responded with a post on social media. “Praying for the State AG tonight,” he wrote. “Honestly. May God bless him and keep him far, far from us.”

No such luck. To win a Republican primary for a U.S. Senate seat in Missouri, Schmitt will need to keep hurling grenades—partly to command attention and partly to cover up the dark secret of his past. 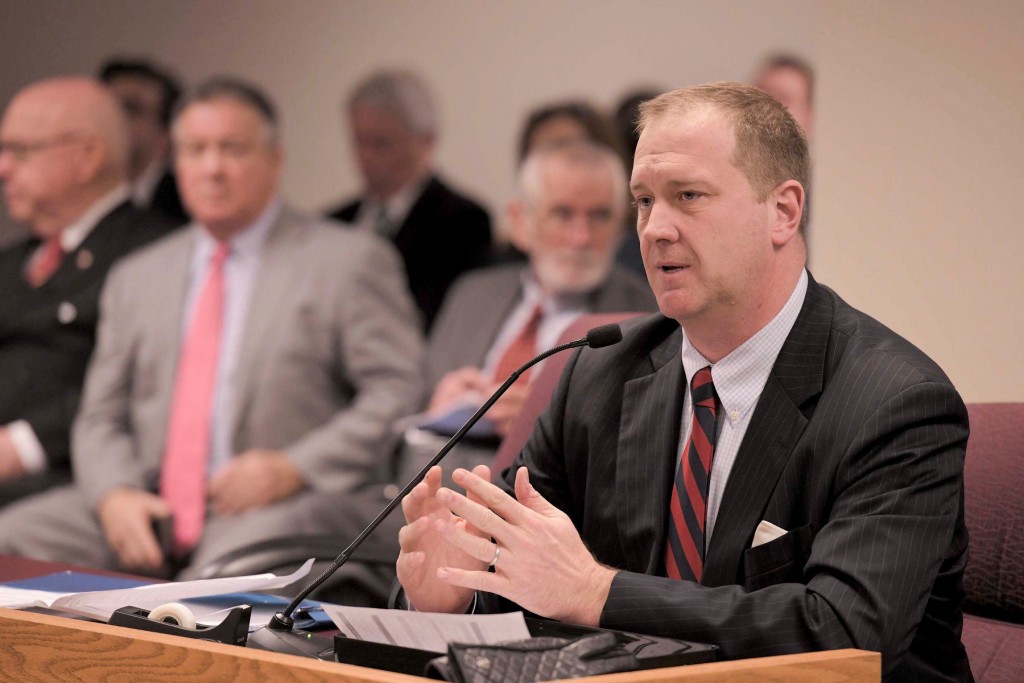 Oh, yes. Eric Schmitt has a past. Not the past with a sex scandal, a campaign finance scandal, and a who-knows-what-else kind of scandal. Those would be the domain of another GOP Senate candidate, ex-Governor Eric Greitens.

But for Republican primary voters, the skeleton in Schmitt’s closet might be worse. You probably want to cover the kids’ ears before breathing this out loud, but here it is. It seems that, for much of his political career, Schmitt was…A MODERATE.

“He has the reputation of being reasonable and likable and he counts a lot of Democrats as friends,” confirms Lauren Arthur, a Democratic state senator from Clay County.

For Schmitt the candidate, this is the worst kind of rap. Missouri primary voters want flamethrowers. They want defiants who will stand up to the big, bad federal government. They do not want reasonable, likable aisle crossers who understand that the government has a role in correcting injustices and protecting vulnerable citizens.

But that indeed is Schmitt’s record, starting with when he was elected to the Missouri Senate in 2008 after serving as an alderman in the city of Glendale in St. Louis County.

While a reliable vote on core GOP issues such as limiting abortions and expanding gun use, he rarely took the lead on those things. Instead, he sponsored a bill requiring insurance companies to treat children with autism, and another allowing use of a cannabis extract in some epilepsy treatments. Both bills passed. The most conservative members of his party screeched about mandates and Obamacare, but Schmitt countered by speaking passionately as the father of a disabled son.

In a move that will likely surface in his Senate primary, Schmitt also sponsored a bill that would extend tax credits to none other than the nation of China to encourage cargo traffic at St. Louis Lambert International Airport. That one didn’t pass.

After the police shooting of Michael Brown and the riots in Ferguson, Missouri, Schmitt engineered a law to curb the “taxation by citation” practice used by municipalities around St. Louis. Their cops routinely pulled over poor and Black drivers for the sole purpose of issuing revenue-producing traffic tickets and fines. His work earned Schmitt the 2015 “Best Politician” honors from the Riverfront Times, St. Louis’ alt publication.

“Risking conservative friendships, Schmitt teamed up with left-leaning adversaries to pass Senate Bill 5 in July,” the publication wrote, in a bouquet that Schmitt likely wishes would vanish from the internet.

“In my experience, Eric was a very reasonable senator,” says Jeff Smith, a Democrat from St. Louis whose tenure in the Missouri Senate overlapped Schmitt’s. “He was interested in helping kids with autism. He was interested in economic development for the St. Louis region. Eric was really trying to get at some of the inequities in the region and I appreciated it. He was willing to take ideas from wherever they came.”

Whatever happened to that guy? It’s no big mystery—just a combination of blind ambition and Missouri’s ongoing lurch into crazyland. Oh, and likely some outside advice. Schmitt’s Senate campaign is using Axiom Strategies, the firm founded by former Kansas Citian Jeff Roe, who treats politics as a blood sport.

Schmitt’s aggressive legal stand against his imaginary forces of tyranny and Marxism, as he likes to blather on social media, may be paying off. A new poll by the Remington Research Group, which is connected with Axiom Strategies, gave him an edge in a field of five declared candidates, with a lead of one percentage point over Greitens. He also leads the field in fundraising.

Whether he becomes a U.S. senator or remains Missouri’s attorney general, Schmitt has revealed an ugly malleability.

Once a voice of reason, he now produces inaccurate, anti-scientific information on Twitter, in his office’s news releases, and even in his lawsuits.

Once a staunch advocate for the St. Louis region, Schmitt has basically gone to war with St. Louis and Kansas City. He has disrespected their mayors—who happen to be the state’s highest-profile Black elected officials—and thwarted their elected prosecutors on innocence cases.

“It’s sad to watch all the bridges that he’s burned amongst the people who worked with him and enjoyed his company,” says John Rizzo, a Democrat who represents eastern Jackson County in the Missouri Senate.

“People inside the Jefferson City bubble realize this is all an act to win the Republican primary,” Lauren Arthur says. But in the process, Schmitt is becoming unrecognizable, perhaps even to himself.

“What are you doing and why are you willing to compromise yourself in this way?” Arthur asks.

Excellent question. But Schmitt is much too busy to answer. So many people to sue, so little time before that 2022 senate primary.