Missouri women: coming soon to a ballot near you 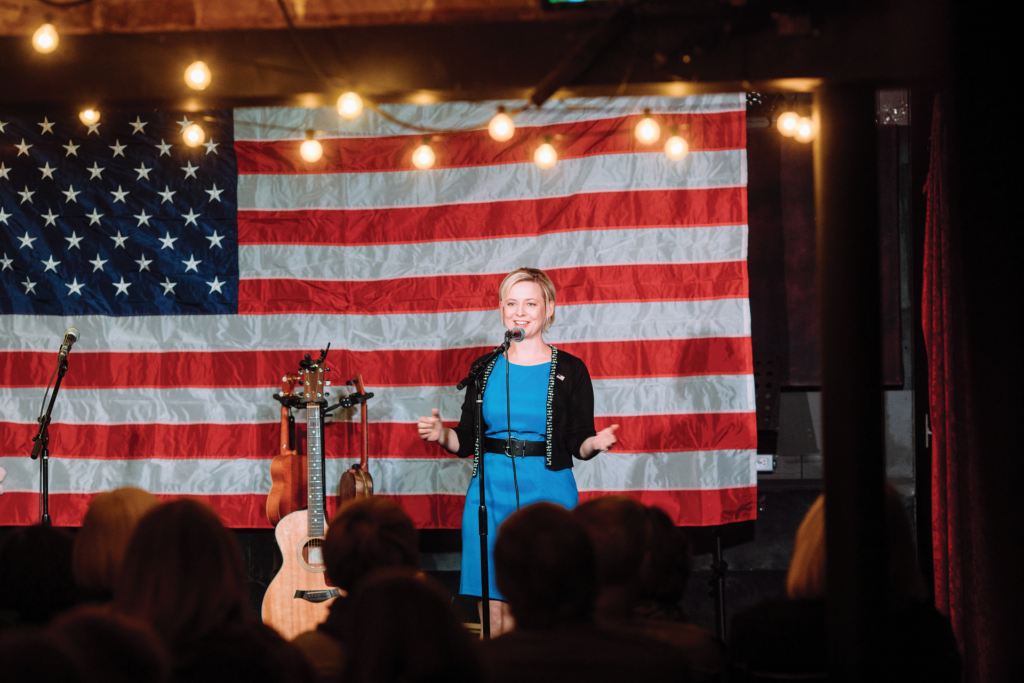 Hillary Shields is early, 25 minutes early to be exact.

She has parked her car across from the Uptown Arts Bar and is making her way on this Thursday, early March evening that happens to be International Women’s Day.

It has been less than four months since Shields narrowly lost a state senate seat to Republican Mike Cierpiot in her Lee’s Summit district. Her campaign ran on grit and the steady knuckle beat of volunteers who canvassed neighborhoods, many of the volunteers driving from all over the metro area to help.

Then a big, dark Republican money tsunami crashed local media markets while outspending Shields’ campaign 10 to 1. The ad campaign included a commercial that lied about Shields’ stance regarding a state lawmaker who made questionable comments about the president. “Since they didn’t have anything real they had to make stuff up.”

Shields was not deterred. She signed up to run again the day filing opened on Feb. 27. She will likely face Cierpiot again.

On this Thursday evening she joins a group of people tired of holding their breath while looking at their newsfeed and are moving beyond clicking “Interested” for an event on social media. They showed up to listen to 10 female candidates and office holders introduce themselves and drum up enthusiasm for local, state and national mid-term elections.

“It starts with the idea that a lot of people believe women are the biggest solution to what is going on,” Uptown Arts Bar owner Greg Patterson says before the event. “I am trying to support women who are progressive. Women are the key to changing politics in our country.”

No arguments inside the bar that night.

Shields took the stage first, acknowledging that she recognized faces of people who helped knock doors for her last fall. Like others she said she went through various stages after the 2016 election, including anger and denial.

“I never quite got to acceptance,” she says. “People were attacking my values, families in my community and attacking public schools.”

That is why she ran last fall, she says. 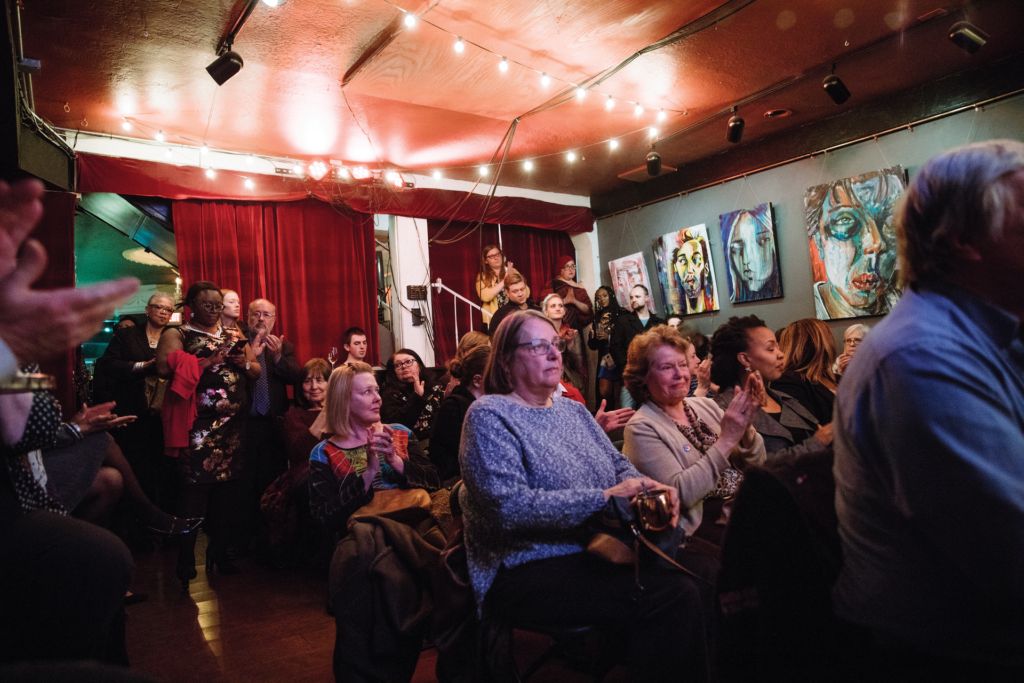 Elsewhere in the crowd:

Renee Hoagenson, who is challenging Vicki Hartzler in the U.S. House this fall. Patterson grew up in Barton County, part of the district, and is a critic of Hartzler. He said his visit with Hoagenson inspired him. Much of the money she has raised for the seat that represents 26 counties, with the boundary touching southeast Kansas City metro area, has been from small donations. Her platform includes campaign finance reform and taking the redistricting decisions out of politicians’ hands. “I want a Congress that is not interested in padding the pocketbook,” of themselves and their friends,” she says. 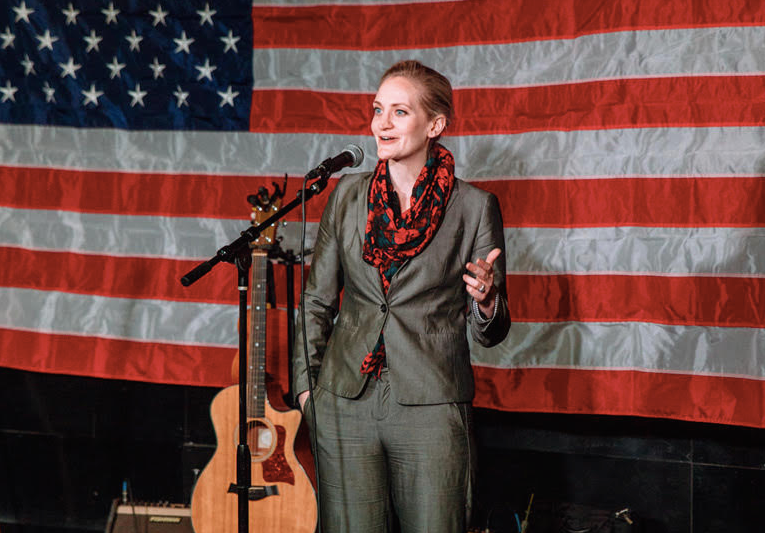 Lauren Arthur is running for State Senate District 17 in a special election on June 5 after serving in the state House for the last four years. She went into politics because she thought that younger people, millennials, were not well represented.  “My reward (for winning) was being confused with an intern, a daughter, a wife, anything but,” a lawmaker. She has seen women mistreated, disrespected and dismissed in meetings and hearings. But, she said, “I’ve also seen women come together and been in so many rooms like this.”

Keri Ingle, who is running for the state house of representatives. Like others who spoke that night she mentioned that she didn’t see herself as a politician, but as a daughter, a mother, a friend and a social worker. She held her 2-month-old daughter after the 2016 election and vowed to help created “a community and world she would thrive in and feel safe in,” says Ingle, who has worked in hospitals and health centers for women and children and marginalized populations. 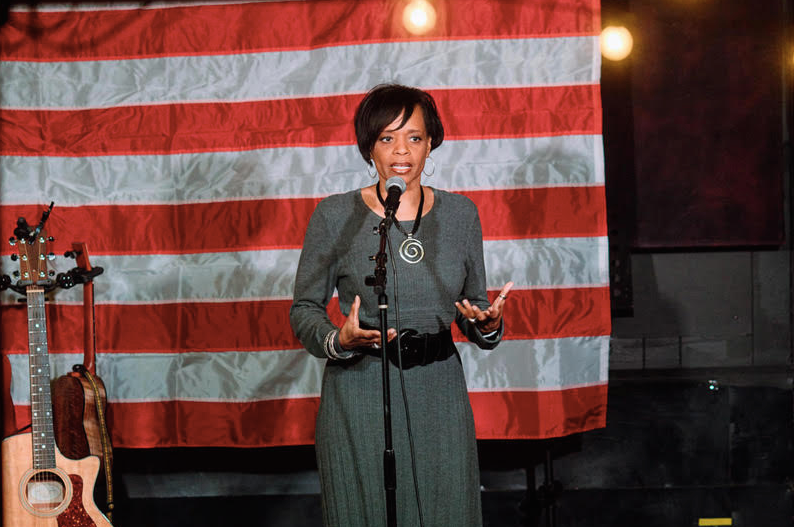 Stacy Johnson-Cosby explained she is running for a sixth district city council seat in Kansas City. She formed her committee in February and is expected to officially launch her campaign in May. It was her first time in front of people as a candidate. She is in real estate and wants to bring attention to the housing shortage, help create high-paying jobs and emphasize transportation issues to bolster Kansas City. Her other goals are to put together a road map so that others who want to run for office can navigate the political race process even if they are “outsiders,” as well a finding a way for volunteers to easily find ways to help schools and organizations. “I’d like to put together a big list of volunteer opportunities and make it well known, with one place to look so someone could find a volunteer role and make an impact,” she says.

A theme of being political-candidate newcomers underscored the evening, but many with experience joined them and offered encouragement. Crystal Williams of the Jackson County Legislature, who spoke of intersectionality. Judy Morgan, who is serving in the Missouri House. McClain Bryant Macklin, who is policy director for Kansas City mayor Sly James and serves on the elected board of trustees for Metropolitan Community College.

But is this group going to energize the left’s base of young people?

A woman named Heather Rozzo sat near the stage, sipping her drink and waiting for speakers to talk.

“We need more women in politics to fix things,” she says. “It’s really ridiculous that we are half the population” and do not have the same representation in public office.

To an observation that tonight’s crowd was lacking in young people and young women, she says, “A lot of younger voters are upset with the Democrats. They are wanting something further left.”