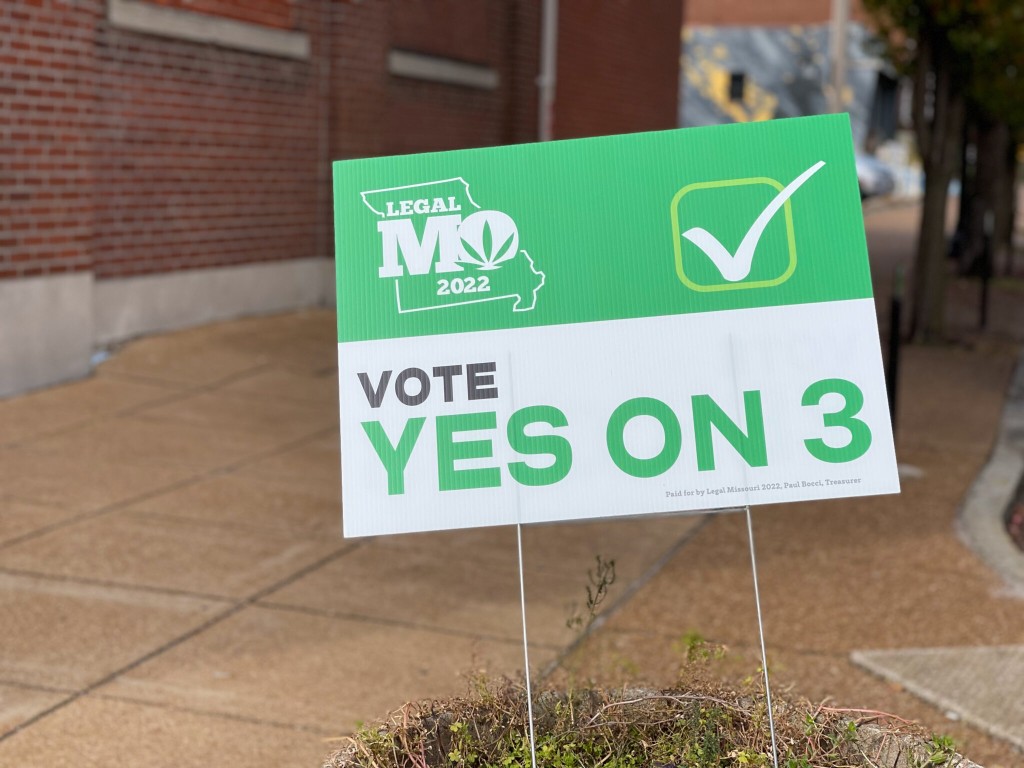 Amendment 3 asked voters whether to amend the Missouri Constitution to remove bans on marijuana sales, consumption and manufacturing for adults over 21 years old, with some caveats. // Photo by Rebecca Rivas/The Missouri Independent

Though down from the 66% of voters who approved medical cannabis in 2018, the recreational marijuana amendment on Tuesday received 53% of the vote.

When the measure goes into effect on Dec. 8, it will no longer be a crime to possess up to three ounces of marijuana. Medical marijuana businesses can begin requesting that day to expand their licenses for adult-use marijuana. According to the measure, the state has 60 days to act on those requests or they will be automatically approved.

Payne said the state can expect millions in tax revenue each year, which will go towards veterans’ services, drug-addiction treatment programs, the state public defender system and processing expungements in the state courts.

And within six months of Dec. 8, circuit courts around the state must order the expungement of the criminal history records of all misdemeanor marijuana offenses for any person who is no longer incarcerated or on probation or parole — and within 12 months for felony marijuana offenses.

Some prosecutors and law enforcement officials claimed it was dangerous, while some Black leaders said it would etch a potentially inequitable legalization process into the state’s constitution and lead to “permanent exclusion” of minorities from the cannabis industry.

But businesses involved in Missouri’s medical marijuana industry, who get first dibs on new recreational licenses, spent nearly $8 million getting the question on the ballot and convincing voters to support it.

Voters also approved two other amendments to the state constitution Tuesday, including measures to require Kansas City to increase funding for its police department and to put the Missouri National Guard into its own cabinet-level department.

However, they voted against the state holding a convention to consider amendments to or a complete revision of the state constitution.

They also voted against a measure to give the state treasurer more flexibility in making investments. Amendment 1 would have extended the time limit on direct investment in federal securities to seven years, along with adding municipal bonds and expanding legislative power to allow other investments.

Lawmakers voted overwhelmingly for the bill that put Amendment 1 on the ballot. However, opponents say the measure could lead to Republican state officeholders “politicizing investments.”

Amendment 4 specifically applied to the Kansas City Police Department, the only police department in Missouri, and possibly in the country, that is controlled by the state and not its local city government officials. A new law passed this year aims to raise the minimum portion of Kansas City’s budget that must be devoted to the police department from 20% to 25% — a $65.2 million increase.

The state constitution currently prohibits the legislature from requiring a city to increase an activity or service beyond that mandated by existing law, unless a state appropriation is made to pay the city for any increased costs.

What voters approved Tuesday was to amend the constitution to provide an exception for the Kansas City Police.

Republican Sen. Tony Luetkemeyer, who sponsored the bill, said in a tweet Tuesday night that Amendment 4’s approval showed “the people of Missouri stand with our @kcpolice officers and against @KansasCity’s radical attempt to defund the KCPD.”

Luetkeymeyer pushed for the funding increase after Kansas City Mayor Quinton Lucas and some city council members attempted to designate $42 million within the police budget for things like community engagement and intervention. A judge ultimately ruled they didn’t have that authority.

Lucas has said the city council already regularly funds the police department above the 25% threshold, so the new mandate will not immediately increase the police budget.

“Instead, the bill represents the raw exercise of power by state lawmakers over the people of Kansas City, as the only people in our state without the ability to influence how one quarter of our budget is spent,” Lucas said in a statement after the governor signed the bill.

Proponents said it will provide clearer communication within the guard, while opponents argue the change will be more disruptive than helpful.

The last question on their ballot was whether the state should hold a convention to consider amendments to or a complete revision of the state constitution.

The Missouri Democrats, who opposed the measure, said the convention would “threaten the progress” made on efforts towards environmental justice, fighting inflation and job creation.

Even observers who thought the constitution needs revision worried about doing so in the current political climate.

“A constitutional convention right in the middle of a culture war would bring out ideologues of all stripes, and you would have the fiercest political strife,” former state archivist and historian Ken Winn said earlier this year. “Everybody with an agenda would be trying to write their ideas into the constitution.”