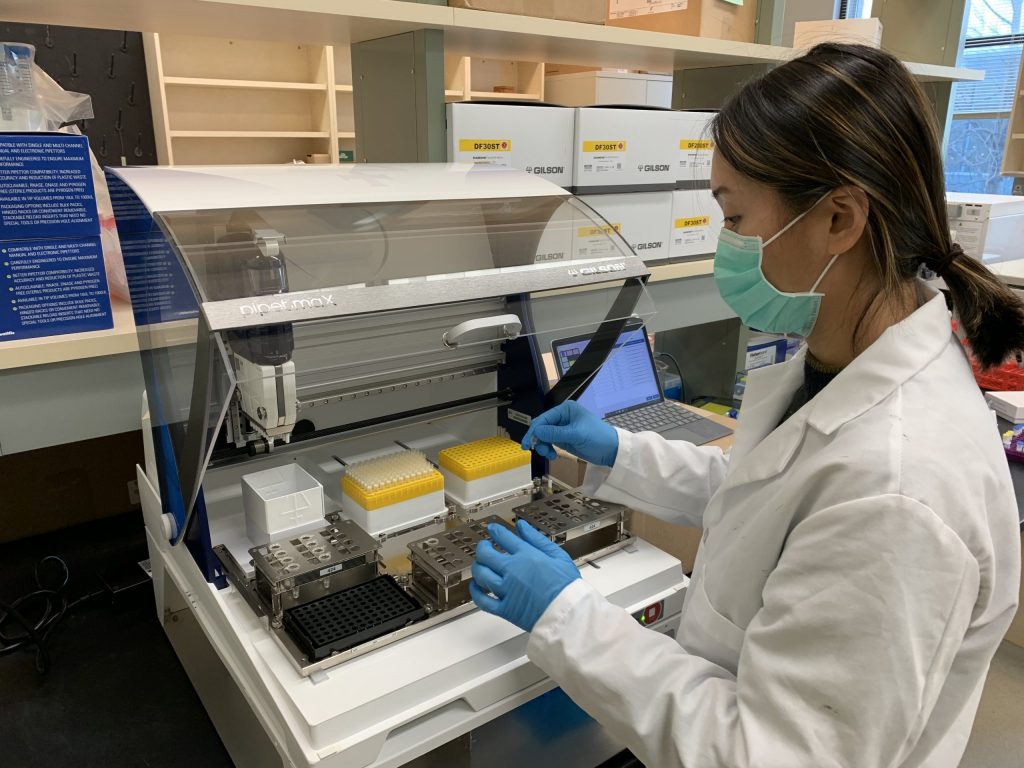 Researchers work to detect remnants of the virus that causes COVID-19 in samples of wastewater collected from across Missouri. // Courtesy of University of Missouri

Southwest Missouri’s most popular tourist areas are the epicenter of a COVID-19 outbreak linked to the Delta variant that is responsible for making India second to the United States in coronavirus cases.

All eight counties along a heavily traveled route from Branson to the Lake of the Ozarks are among the 30 local health jurisdictions with the highest rate of newly reported cases so far this month.

The variant has been identified in lab tests and wastewater monitoring in 18 communities across the state. Not every county where it has appeared in wastewater is showing a surge in cases, but a rapid increase due to the at least in part to the variant is evident both in southwest Missouri and in north-central Missouri, where a surge began in mid-May.

Local health officials said low vaccination rates are allowing the variant, which accounts for 6 percent of all cases in the U.S., to spread rapidly. Webster County, where only 26 percent of residents are fully vaccinated, has added 97 cases this month through Friday after reporting 106 in the final 15 days of May.

The variant has been identified in the wastewater from Marshfield, the county seat.

“The thing that personally keeps me up at night is the responsibility of keeping the 40,000 people in this county alive whether they want it or not,” said Scott Allen, co-administrator of the Webster County Health Unit.

Brookfield in north Missouri’s Linn County was among the first to show evidence of the variant in wastewater, and in the final weeks of May, Linn County and neighboring Livingston County were tracking their highest active case counts of the pandemic.

Linn, which reported 64 additional cases Thursday, and Livingston, along with five adjacent counties of Caldwell, Chariton, Daviess, Grundy and Macon, are among the 30 jurisdictions with the highest infection rates this month.

The highest numbers are in Greene County, which has added 656 cases. The infection rate is three to four times that of more populous jurisdictions around St. Louis and Kansas City. Greene County had 776 cases for the entire month of May.

Statewide, the seven-day combined average of reported cases identified through the PCR and antigen tests has risen more than 25 percent since June 1, from 400 per day to 502 per day as of Thursday.

The state health department seven-day combined average, based on the day a person was tested rather than when the case was reported, shows a 30 percent increase from the rate for June 1 to the rate for June 8, the most recent available.

Hospitalizations in both southwest and central Missouri are rising, with CoxHealth in Springfield reopening a coronavirus ICU wing closed in February as case numbers declined.

Steve Edwards, CEO of CoxHealth, tweeted Monday that his hospital was treating 48 COVID-19 patients, including two who were 16 years old, and the Delta variant was to blame.

“Those that aren’t vaccinated are sitting ducks,” Edwards wrote.

The tweet, Edwards told The Independent in an interview, was intended to generate alarm at the potential for a wave of new infections.

A program that combined the research expertise of the University of Missouri and the sample collecting ability of the Department of Natural Resources is nearing its first anniversary of analyzing wastewater from sewage systems around the state for signs of COVID-19 virus.

The analysis is good enough to differentiate between mutations from the coronavirus that first emerged in late 2019.

In a three-week period at the end of May, the analysis of samples from sewer systems went from having no locations where the variant is dominant to 18, said Marc Johnson, professor of molecular microbiology and immunology at the University of Missouri.

The analysis looks for viral fragments shed during excretion. There is no evidence anyone has become ill with COVID because of exposure to wastewater.

Unlike the Alpha variant, which was responsible for a wave of illness in Great Britain and, when it arrived, became the dominant variant in major cities, the Delta variant is being detected first in smaller systems, Johnson said.

“It is actually more of the rural areas,” he said. “The I-70 corridor is mostly clear.”

As the analysis is completed, Johnson said, local health officials and the state health department receive the results.

Some local departments, like the Springfield-Greene County Health Department, have made it clear what is causing the rise in cases in their communities. Others, especially where there hasn’t been a spike in cases, have been silent.

At a Tuesday briefing shown live on the department’s Facebook page, Springfield’s Acting Director of Health Katie Towns said the disease is spreading as it has since the beginning, through close contact between unvaccinated people.

“Sixty-two percent of our community is still unvaccinated, meaning these new cases of COVID-19 pose a significant threat to the majority of Greene County residents,” Towns said.

In Linn County, health Director Krista Neblock posted a notice June 1 on her department’s Facebook page that the Delta variant had been found in the county.

She followed that with a June 4 press release about the wastewater testing. Higher amounts of viral fragments in wastewater are evidence of higher incidence of disease being observed, Neblock wrote. By identifying the variant, she was able to warn the county that it “may be more infectious than the parent strain of the COVID-19 virus or other variants.”

On Monday, she went on Facebook again, this time to clear up confusion about how the variant had been detected.

“It has come to our attention there are rumors being circulated that COVID variants are in our drinking water…THIS IS 100% NOT TRUE,” the post states.

As local health officials battle the increase in cases with urgent messages to get vaccinated and maintain social distance when in groups, they are also fighting misinformation and reluctance to wear a mask or get a shot.

“I think the best thing we can do is provide that transparency, to continue to provide people with that accurate information and be a trusted source for the community so we are not leaving any gaps where miscommunication can thrive,” said Aaron Schekorra, spokesman for the Springfield-Greene County Health Department.

But like the attempt to refute the rumor about variants in Linn County’s drinking water, their tools are limited.

“It is a pandemic that has a tail longer than it needs to be and we are just trying to come to a realization where everyone is not going to listen to a doctor,” Edwards said.

Towns, in the briefing, took on the idea that having COVID-19 previously provides full immunity. The Delta variant has been shown to cause illness a second time.

People unlikely to wear a mask or get vaccinated are most commonly rural, evangelical, uninsured or Republican, Edwards said. That is also a majority of the people in southwest Missouri, he said.

“What I realize is that you can’t overcome our demographics very easily,” he said. “We still discharge patients who say they believe we have lied to them and they didn’t have COVID.”

Wastewater testing indicates the Delta variant is present in Neosho, the county seat of Newton County, and Joplin, which straddles the Jasper-Newton county line. There have been 253 new cases since June 1 in Newton, Jasper and Joplin, which all report separately.

“It is concerning but not alarming,” Larry Begner, administrator of the Newton County Health Department, said Wednesday. “The numbers I have today, we are at about 66 active cases, whereas on June 1, we were at 35.”

There does not appear to be a correlation between vaccination rates and whether an increase in COVID-19 cases accompanies detection in wastewater. Joplin, with an infection rate for the month close to that of Greene County, is third in the state with 38.8 percent of its population fully vaccinated.

Texas County, which is also close to Greene County in infection rate, is 99th, with only 18.9 percent of its population fully vaccinated.

Newton County is 109th, with only 16.6 percent of residents outside Joplin vaccinated. Everyone who wanted it has been vaccinated, Bergner said, and the rest of the task is overcoming individual reluctance.

“There is still a lot of fear in the community about the effect of the vaccine,” he said. “There are still some who think there is a tracking device in the vaccine.”

With the increase that has followed Memorial Day, and upcoming gatherings for Independence Day, Bergner worries about people who aren’t wearing masks and aren’t vaccinated.

“Growing overconfident that we have managed this disease will call it back,” he said.

The CDC’s May 16 guidelines stating people who were fully vaccinated could engage in most activities without a mask were well stated, Edwards said.

But in practice, the key part – that it applies to people fully vaccinated – has been ignored, he said.

“It is clear that policy makers decided to interpret it that we don’t need masking at all,” he said. “That is true throughout much of the United States.

“The CDC has a lot of really really smart people but they probably didn’t anticipate human behavior in the middle of a very politicized pandemic.”