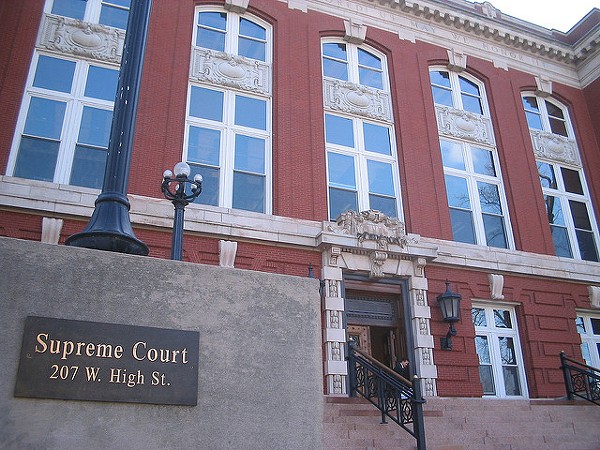 In a win for transparency advocates, the Missouri Supreme Court ruled Tuesday that government agencies cannot charge for time attorneys spend reviewing public records that are requested under the state’s Sunshine Law.

In a 6-0 decision, the judges ruled that a lower court erred by siding with Gov. Mike Parson in a lawsuit alleging his office improperly redacted records, charged exorbitant fees and knowingly and purposely violated the state’s open records law.

Judge Patricia Breckenridge wrote that the court concluded the allegations were sufficient to plead that “the Governor’s Office had an intent to violate the law.”

The Missouri Supreme Court vacated a 2019 decision to dismiss the case and sent it back to the Cole County Circuit Court.

The case was brought in 2018 by Elad Gross, an attorney and former Democratic candidate for attorney general. It stemmed from a records request he filed with Parson’s office seeking records relating to campaign contributions as part of a larger investigation into “dark money” nonprofit organizations.

In response, the governor’s then-general counsel said Gross’ request resulted in 13,659 responsive documents that would cost an estimated $3,618.40 to produce.

“Once we receive this amount we estimate that it will take at least 120 business days to complete this request,” Christopher Limbaugh, Parson’s former general counsel, wrote.

Gross challenged the governor’s office on a variety of grounds, from charging for the time attorneys spent reviewing records to their redaction and a failure to provide a detailed explanation for them.

He celebrated Tuesday’s ruling, which sided with him on nearly every point, and said it would have implications throughout state government on the issue of transparency.

“Now there’s a very clear ruling that those practices have always been illegal, should never have been used to stop the public from accessing public records or members of the media for that point, too,” Gross said. “And hopefully those kinds of abuses will now be put to an end.”

A spokesman for the attorney general’s office declined to comment since the case is ongoing. A spokeswoman for the governor’s office did not immediately respond to a request for comment Tuesday.

An invoice in response to Gross’ initial records request estimated that it would take 90.46 hours of “research/processing” time at a rate of $40.00 per hour to fulfill. Gross later filed a second records request seeking documents and communications related to his first request.

Gross argued that attorney review time is not an authorized charge under the law, a point the justices affirmed in Tuesday’s ruling.

The governor’s office had pushed back on Gross’ claims, arguing it had the discretion to waive or charge fees, issue redactions and that attorney review was needed to determine whether the documents contained privileged communications.

The Sunshine Law permits governmental bodies to charge requestors fees for research time and time staff spent to provide access to such records. Fees for time spent for legal review is a common charge cited in cost estimates.

The ruling also found the lower court erred in siding with the governor’s office on additional points related to the office’s failure to provide a detailed explanation for a delay of 120 days that the records would be produced by and the redaction of records in a subsequent request.

While the Sunshine Law authorizes the redaction of info in certain circumstances, “that general authorization does not mean the redaction that took place in this case was proper,” the court said in its ruling.

The Missouri Supreme Court also agreed that the lower court erred in putting the burden on Gross to prove a violation of the Sunshine Law rather than putting that burden on the public governmental body to prove its compliance with the law.

The court did not side with Gross on an argument that the governor’s office violated due process and equal protection clauses of the Missouri and U.S. constitutions because those constitutional issues had not been raised in circuit court.

Gross said it may be another year before the case is resolved depending on if it’s appealed. He said he has subpoenas pending related to his investigation into dark money nonprofits that the records requests had been related to.

If the state wanted to, Gross said, it could hand over the requested records.

“They could do it tomorrow if they wanted to,” he said. “But they haven’t.”

Public records disputes rarely make it to the level of the Missouri Supreme Court, and Gross said he felt a unique responsibility to pursue legal action over his request three years ago.

“We don’t see these kinds of cases going up all the way to this level very often, because most people do not have these kinds of resources, do not have the same kind of opportunity that I have as an attorney to be able to actually find justice for regular folks,” Gross said, later adding: “I think that having transparency in our government is a fundamental issue, regardless of party.”