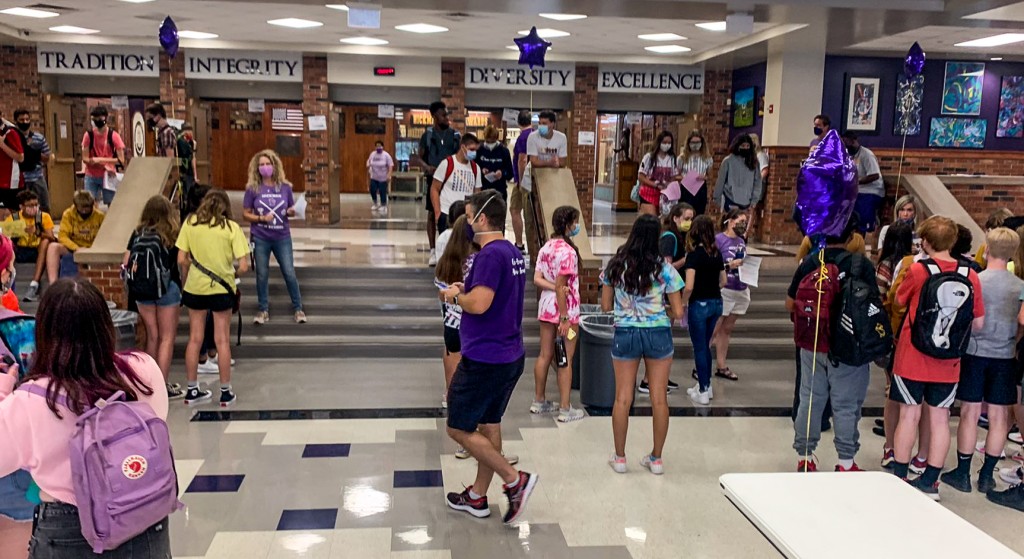 Hickman High students in Columbia, Mo. navigate the halls on their first day back to school on Aug. 23, 2021. // Photo courtesy of Hickman High School

Fourth graders Addison, Reagan and Lauren Harper are no strangers to catastrophes or challenging circumstances.

Five days after they were born in May 2011, a tornado swept through Joplin and leveled their home, destroying a chance at normalcy for their family — along with the entire community — for a long time.

Ten years later, the Harper triplets entered Jefferson Elementary on their first day back on Monday wearing matching “Hello 4th Grade” T-shirts. While the girls were smiling and laughing together, it was overwhelming for their mother, Jayme.

“With all the changes, it’s just been a whirlwind,” Jayme Harper said. “Our girls have been going to school despite their current health conditions, but we’ve been very cautious with them because one has a pacemaker, one has a shunt and one is autistic.”

Joplin is among the cities in southern Missouri that’s been hit hard by the surge of the more contagious Delta variant. But unlike 10 years ago, their community is not alone in the upheaval.

Thousands of students across Missouri are back in class this week, as the Delta variant continues to spread rapidly. Children under 12 aren’t yet eligible to take a COVID vaccine, and teens between 12 to 14 years old have the lowest vaccination rate of any age group in the state.

Cases among children in Missouri have grown exponentially — following several other southern states — as the Delta variant causes them to become sicker and in some cases needing hospitalization.

The state’s education agency has given school districts essentially complete control on how they respond to the potential danger, and the responses vary greatly.

Some districts — like the Joplin School District — are not requiring masks or testing students. Others are much more stringent.

“We’re not here to come down from the mountain and tell you what to do,” Robert Knodell, the acting director of the state health department, told school administrators earlier this month. “We’re also not going to stick our head in the sand and claim that this is over, because it’s not.”

Yet despite the state’s public stance that local districts will make safety decisions about their students, Missouri Attorney General Eric Schmitt filed a lawsuit Tuesday hoping to block any mask requirements in schools.

The Food and Drug Administration’s full approval of the Pfizer vaccine for those 16 and older may spur more schools to mandate vaccinations for their staff.

But for now health professionals continue to strongly urge vaccinations, with schools hosting community vaccine clinics of their own to not just vaccinate students against COVID, but also the regularly required school immunizations.

Molly Ticknor, the executive director of the Show-Me School-Based Health Alliance of Missouri, said in addition to tackling safety concerns with the Delta variant, schools are trying to meet the broader healthcare needs of students who they may not have had eyes on for the last school year.

School superintendents said they hope the vaccine will be authorized for children under 12 years old this fall—and sooner rather than later.

While vaccination rates have slightly increased to a 7-day-average of more than 13,000 a day, they still remain low overall. Only 44 percent of all Missourians are fully vaccinated, according to the CDC, which puts Missouri with the 13th-lowest vaccination rate in the nation.

Harper decided to get vaccinated in light of the Delta surge and start of the school year, but she believes she’s in the minority. This winter, she caught the virus and was put on a ventilator for 20 days right after Christmas. She had to learn to walk and eat again, but remained resistant to getting vaccinated at first. Her doctor recently told her she would likely die if she got sick with the more contagious strain of COVID-19, which data suggests may cause more severe illness.

“For me, it took being on the ventilator and my doctor’s persuasion,” she said, noting it will likely take the same for many people she knows.

However, Harper still believes that it should be parents’ choice if their children wear masks or not. And because the girls “hate” masking up, they’ve decided to go without them.

‘A lot of anxiety right now’

Superintendents—many who still haven’t recovered from the incredible challenges of 2020 — are struggling to stay informed about the rising cases and new public health recommendations.

“I’m saddened that we’re here,” said Sharonica Hardin-Bartley, superintendent of University City Schools in the St. Louis region. “We were really hopeful for more calm and ease, as we welcome back our young people. … Still a lot of anxiety right now.”

For Hardin-Bartley, the past year has been one of the most challenging in her 25 years in education.

“I’m a little traumatized just thinking about it,” she said, noting she’s had to close entire school buildings due to COVID cases. “The decisions that we had to make often were not popular. I recall calling parents at 9 p.m. at night to tell them that their child may have been exposed.”

While she understands the “weight” that people have in making the decision to get vaccinated or to vaccinate their child, Hardin-Bartley has learned through health experts that increasing their students’ vaccination rates — along with requiring masks and other safety measures — is the way to keep schools open.

“We want to have our children in-person instruction, engaging with educators,” she said, “and we want to also do that safely for our younger scholars.”

Superintendents have been under such immense pressure that it’s caused an exodus nationwide after last year, she said.

“We’ve learned that we can have a plan A,” Obeng said, “but we do need to kind of plan for not just Plan B but Plan C as well, too, because things could change really quickly.”

The district’s safety proposal has contingency plans for what happens if cases are at green, yellow or red status, providing options to transition to virtual learning if needed.

Obeng believes a coordinated response between cities and the state would help schools receive support from the community and mitigate risk.

DESE has issued guidance at a state level and offered resources like testing programs that schools can utilize.

But as was the case last year, “since Missouri is a local control state, decisions about mitigation strategies implemented at schools will be ultimately decided at the local level,” said Mallory McGowin, a spokeswoman for DESE.

Anna-Stacia Allen is the executive director of Navigate STL Schools, an organization that provides information about area schools to families. From the conversations she’s had with St. Louis parents, they seem to be concerned about the rising COVID cases, but they also seem to be “cautiously optimistic” about the school year.

The main thing they want is transparent communication of any potential contingency plans, and many parents currently don’t feel like they’re getting it, she said.

“If, for some reason, winter quarter would need to be virtual because of a spike in flu and COVID, what would the school’s response be to that?” she said, on the questions she’s hearing from families. “Or is that even a possibility?”

Fears of the vaccine

On a night in early August, about a dozen young people jumped on stage to compete in a dance battle near downtown St. Louis for a cash prize of 1,000.

Nearby, the city’s public health department also set up a mobile vaccination clinic, hoping to attract some of the young audience members and participants.

Zacchaeus Williams, 16, was vaccinated in May, but he said his friends are still nervous about it.

“My little brother, he has autism,” Williams said. “So I wanted to be safe around him, knowing that he doesn’t keep a mask on his face. If I got COVID, it’d be easy for him to get COVID also.”

Rachel Aaliyah Jackson, 18, just got her first dose on July 28 and recently received her second one — just in time to fulfill Webster University’s vaccination mandate before her first college semester starts.

“I was very confused for a long time,” Jackson said. “I’m a Christian, so I prayed on it. But I had to get it for school.”

Before she got it, she spoke to family members who had been vaccinated to see if they had any side effects and found out they were unharmed. Her parents, however, were still worried.

“They’re pastors, and they prayed on it,” she said, “but then they realized that this could save lives.”

“I think we’re going to move to opening our studios for vaccinated youth and staff [only] soon,” she said. “We’re going to have to because it’s too dangerous otherwise.”

A majority of the Story Stitchers youth are Black. And in the Black community, the COVID vaccine hesitancy often stems from the unethical Tuskegee experiment, said Dr. Mary Tillman, a retired pediatrician and emeritus professor of pediatrics at Washington University School of Medicine.

Beginning in 1932, it was a federally-funded study on syphilis that lasted four decades, where Black men were told they were receiving treatment for syphilis but instead were just given placebos — even when a good treatment was eventually discovered in 1943. While the experiment ended in the 1970s, the Black community’s distrust of the federal medical programs still exists today.

But the response to the COVID vaccine has been in stark contrast to other mandated vaccinations. When Tillman still practiced, it was rare for parents to ask for exemptions for the required vaccinations students must have to attend school.

She still gets calls from parents and former patients. Some have worried about the speed of the vaccine’s development and how fast the news around COVID changes and others feared the vaccine could make them sterile. Doctors and experts have said the science doesn’t support that and there is no evidence that the vaccine causes infertility.

She said she’s heard of teenagers who worry not getting vaccinated may impact their ability to play sports, and have recruited “surrogate” parents to sign off on them getting one.

Tillman said adults should consider the impact not being vaccinated may have on the children around them who are too young to be eligible currently for the vaccine.

“Follow the science. It may be slow at times because the science wants to get it right,” Tillman said. “But when we come out with it, then it’s usually true.”