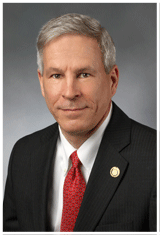 In addition to sponsoring a bill designating jumping jacks as the official exercise of Missouri, state Sen. Rob Schaaf has strong opinions about controlling opioid abuse.

A St. Joseph Republican, Schaaf has clung to the belief that Missouri should not establish a prescription drug–monitoring program. Every other state has set up a monitoring system to thwart patients who may go “doctor shopping” in an effort to obtain painkillers.

Schaaf, a physician, has filibustered against bills to establish such monitoring in Missouri. A right-wing Marcus Welby, he holds the curious view that when people die of overdoses, that “just removes them from the gene pool.” He has also opposed Medicaid expansion and promoted a ballot measure that prevented the state from setting up its own health insurance exchange.

In the current legislative session, Schaaf introduced a bill to set up a prescription drug monitoring program different from those in other states. Calling Schaaf’s idea “fake” and a “boondoggle,” the Missouri Medical Association supports a competing piece of legislation that would bring Missouri’s efforts in line what the rest of the country is doing. (The health news site STAT published a story this morning that explains the differences in the proposals.)

Not willing to wait for the bumpkins in Jefferson City to sort things out, Kansas City, Independence and other communities around Missouri have worked to create their own prescription drug monitoring system.