Two school superintendents who received the form from the Treasurer’s Office and signed it said the change is highly unusual. 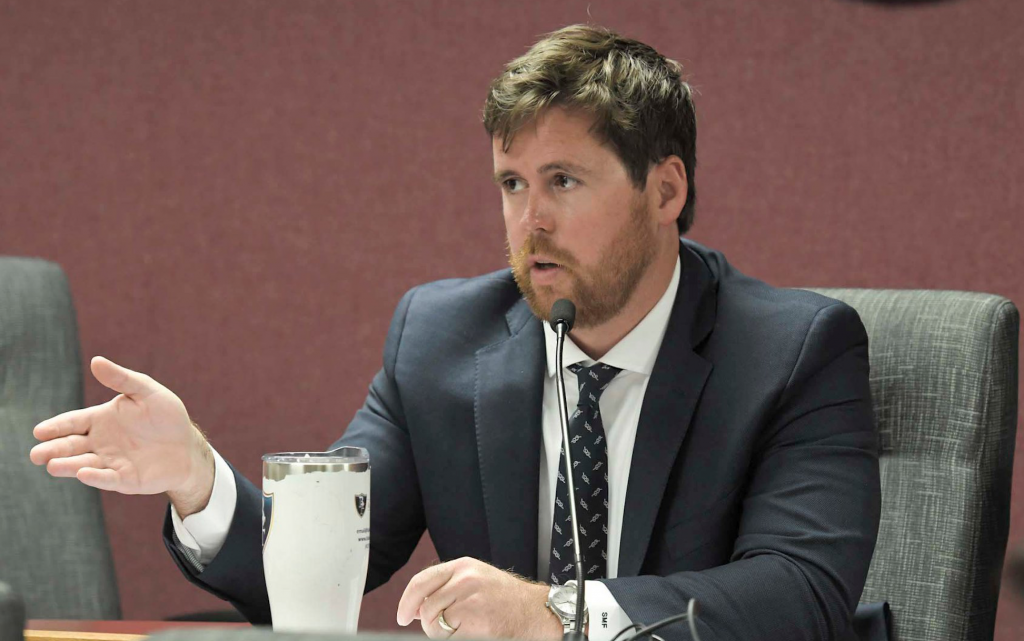 If school districts want to take advantage of a lower interest rate on bonds, Missouri Treasurer Scott Fitzpatrick is requiring them to certify compliance with a recent court ruling targeting local health orders before his office will approve of the deal.

Fitzpatrick detailed the decision he described as “unprecedented” in an interview Wednesday with Missourinet.

Two school superintendents who received the instruction from the state said Thursday the change is highly unusual. But each said they accepted the terms in order to ensure higher costs wouldn’t be passed on to taxpayers in their community.

“It’s a little bit difficult to reconcile how the two things go together, but I was taken by surprise on Monday when I got the form,” said Karl Matt, superintendent of the North Platte R-1 School District.

The change appears to be another avenue by which school districts are being pressured to comply with a recent court ruling that Attorney General Eric Schmitt has been trying to enforce.

Mary Compton, a spokeswoman for the treasurer’s office, noted school districts’ participation in the bond direct deposit program is voluntary and said Fitzpatrick has the discretion to determine whether or not to grant approval for the financial transactions.

According to a copy of the certification agreement obtained by The Independent, superintendents were asked to certify that their district was in compliance with directives Schmitt sent Dec. 7 or that the district would become compliant no later than Dec. 23 — the day a after the court ruling becomes final under the rules governing civil cases.

For decades, the Missouri Health and Educational Facilities Authority (MOHEFA) has entered into financing agreements with school districts to repay debt. By agreeing to set aside a portion of its state aid, a district can receive a lower interest rate than they would otherwise be able to secure.

However, Fitzpatrick told Missourinet that going forward that’s changing. School districts will have to certify they will comply with Green’s ruling in order to receive approval from the Treasurer’s Office on the agreement.

“If they want our approval prior to the time that the closing is scheduled, we have to have that certification in hand,” Fitzpatrick told Missourinet.

If districts don’t certify their compliance, then closing the deal would be delayed, he said, and they may have to rely on their own credit to borrow funds, which would likely result in a higher interest rate.

Compton said Thursday that six school districts have been asked to sign the certification with four doing so and two pending.

Both superintendents said they received the certification form a few days before their deals were scheduled to close and signed them this week.

Erica Chandler, a spokeswoman for the Affton School District, confirmed the district received the certification form on Monday and is currently exploring the potential impacts it will have on their district.

Not going through with the bond deal would have meant having to consider raising tax rates to pay for future projects or delaying projects, Matt said.

“It’s a tough spot. We’re a small community and the chance to save the taxpayers roughly a million dollars is big,” Matt said, “but you also have to balance that with looking at what’s the best interest of your students’ safety — which your students’ safety is worth more than a million dollars. I think it’s kind of the way things are heading anyway.”

If his district was unable to consolidate debt at the lower interest rate, Klinginsmith said it would have lost the expected savings and taxes would remain at current levels. That, he said, would “be almost a tax increase on our local taxpayers by us not being able to refinance.”

In the past week, a growing number of school boards have voted to allow mitigation measures, like mask requirements, to expire. Others have pushed back on Schmitt’s demands, citing both local authority and state statutes that they argue allow for their health measures.

Matt and Klinginsmith said both their health departments have stopped issuing quarantine notices following Green’s ruling. The North Platte R-1 School Board is expected to adjust the district’s safety plan Thursday night, and the district will likely not be identifying close contacts after that, Matt said.

Klinginsmith said he could see how the new requirement might pose a problem for other districts who are attempting to follow the guidance of their health departments, and expressed concern if other parameters, like proficiency levels or test scores, might be used in the future as a requirement to allow districts to refinance their bonds.

“It definitely seems to be crossing some sort of line,” Klinginsmith said. “But we just follow the rules that are sent to us, and we’re happy that we’re able to refinance.”

Fitzpatrick cited the possibility of future litigation by Schmitt as a reason that factored into his decision, in addition to wanting to ensure schools are compliant with the law.

“For us, it doesn’t make sense for the state to enter an agreement allowing a district to piggyback off of our credit rating, if simultaneously they’re about to be sued by the state for not complying with a court order and what the attorney general has interpreted as being the law.

“And so that is what it comes down to. It has to do with the risk of the district being embroiled in litigation with the state, while at the same time seeking to use the state’s credit to borrow money,” Fitzpatrick said.

Asked if critics may view the move as politicizing a routine process, Fitzpatrick, who is running for state auditor, told Missourinet that he wasn’t loudly publicizing the decision.

“You called me. It’s not like I’m out there, thumping my chest in the press about this,” he told Missourinet. “This is something we’re doing because we believe it’s the right thing to do and it’s the financially prudent thing to do.”

Along with Fitzpatrick’s signature, the financing agreements must be approved by MOHEFA and the state education department.

It’s unclear if MOHEFA approves of the change. MOHEFA’s executive director Michael Stanard did not immediately respond to requests for comment.

Both MOHEFA and Department of Elementary and Secondary Education (DESE) officials were copied on an email the Treasurer’s Office sent informing a district of the certification form, according to an email obtained by The Independent.

Mallory McGowin, a spokeswoman for DESE, said the department didn’t have prior knowledge that the Treasurer’s Office was adding the certification form to the standard financing agreement documentation.

Compton said Fitzpatrick’s fiduciary responsibility is separate from MOHEFA’s responsibilities towards the program, and that he did not need authorization from any other party to require the certification.

Fitzpatrick told Missourinet he had received guidance from both the attorney general’s office and his office’s counsel, and said he has the discretion on whether he signs off on the deals.

“It’s my discretion as a state treasurer to do that or not,” Fitzpatrick told Missourinet.

Chris Nuelle, a spokesman for Schmitt, said the attorney general’s office was grateful to see Fitzpatrick feels the same to ensure districts come into compliance and is “pleased to have Treasurer Fitzpatrick with us in this important fight.”

The effects of last month’s court ruling has continued to reverberate across the state with more than a dozen local health departments stopping aspects of their work to surveil and mitigate the spread of the coronavirus, citing a lack of guidance from the state health department.

Warning of the potential to hinder their ability to respond to all contagious diseases more broadly, the counties of Jackson and St. Louis and a local public health department, have requested to intervene in the case and appeal the ruling.

Meanwhile, the South Nodaway R-IV and Polo R-VII School Districts ended their fall semesters early this week in the face of large numbers of students and staff out sick.

On Wednesday, the St. Louis County Department of Public Health released an analysis that found, for the week ending Dec. 4, self-reported COVID-19 cases among school staff reached a peak of 95 — a 70% increase from the previous high of 56 staff cases.

For that same week, there were 402 cases reported among students, the second-highest amount in a week, and 551 pediatric COVID cases diagnosed in the county — more than any single week since November 2020, the health department said.

While in-school transmission declined, there were 1,514 staff and students reported as being quarantined due to a school-related exposure — the highest figure since the beginning of October, the analysis found.