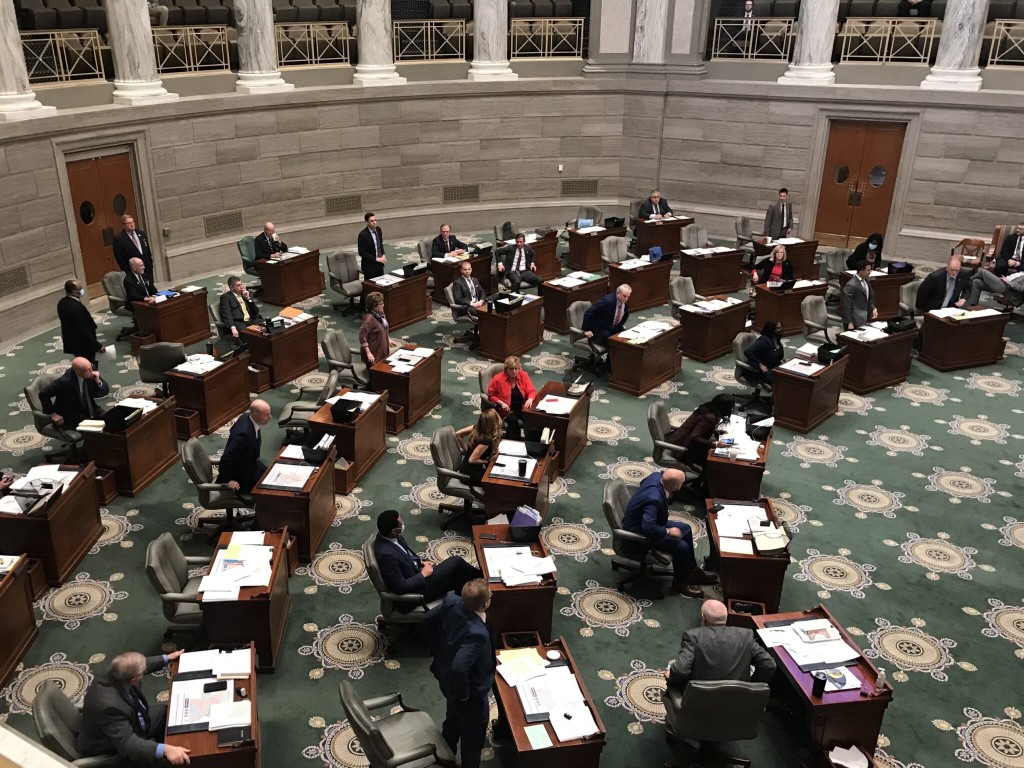 The endorsements signal the rising stakes of the upcoming Senate primaries which have the potential to reshape the make-up of the chamber. // Photo by Tessa Weinberg/Missouri Independent

In letters sent last week to candidates, the Missouri Right to Life Political Action Committee informed some they were selected “as the only candidate in your race who will be an effective voice for the protection of innocent human life.”

Of the 17 state Senate seats up this year, six are held by Republican incumbents who face primary challengers: Sens. Mike Bernskoetter of Jefferson City, Justin Brown of Rolla, Mike Cierpiot of Lee’s Summit, Sandy Crawford of Buffalo, Lincoln Hough of Springfield and Bill White of Joplin.

At least five challengers to incumbent senators touted their recent endorsement from Missouri Right to Life on social media.

“The incumbent will not be endorsed due to his votes to fund Planned Parenthood,” Dave Plemmons, the chairman of the PAC wrote in an endorsement letter sent to Joe Nicola, a candidate running for the 8th District seat currently held by Cierpiot.

It is uncertain if every incumbent being challenged for re-election will see the endorsement go to an opponent.

Bill Yarberry, a Republican candidate running against Crawford for the 28th District, said he received a June 8 letter from Plemmons that read: “We have recorded you as submitting a good survey in our records. However, the MRL State PAC will not be doing an endorsement in this race.”

Crawford was endorsed by the PAC in her 2018 campaign, and is the only GOP incumbent senator facing a primary challenger that voted in favor of an amendment to bar funds to Planned Parenthood last year.

Representatives for Missouri Right to Life did not respond to requests for comment.

The endorsements signal the rising stakes of the upcoming Senate primaries which have the potential to reshape the make-up of the chamber that has been dogged by bitter GOP infighting between members of the conservative caucus and lawmakers generally aligned with Senate leadership.

This past session, lawmakers zeroed out funding for abortion providers and their affiliates through the state budget and barred Planned Parenthood from being reimbursed for services provided through the state’s Medicaid program. Planned Parenthood is suing the Department of Social Services over restricted Medicaid payments as a result of a supplemental budget signed earlier this year that contained the language.

Despite the language lawmakers added to the state budget, they failed to pass legislation that would also limit funding to abortion providers through statute. Members of the conservative caucus have continued to push for limits to be passed through state law since an essential tax on hospitals, nursing homes and pharmacies, known as the federal reimbursement allowance, was renewed last year without the language.

In a May legislative update sent to their supporters, Missouri Right to Life lamented that language stripping funding from Planned Parenthood was not passed in statute and laid the blame at Senate leadership’s feet for anti-abortion priorities not crossing the finish line this session.

The organization urged Senate candidates to make clear their stance on employing a rare procedural move that cuts off debate, known as the previous question, to further anti-abortion legislation.

“​​Very important: if you want your pro-life values protected, you will talk to your Senate candidates about their position on calling the previous question to shut down a pro-abortion filibuster on a pro-life bill in the Missouri Senate,” the newsletter read. “Compromise for pro-abortion Senators means gutting a pro-life bill and taking away any pro-life protections.”

Reached Friday, White said he had not yet received word from Missouri Right to Life on whether the organization was endorsing his campaign.

On Sunday, White’s opponent in the Republican primary, Jill Carter, wrote on Facebook she was honored to be the only candidate to be endorsed by Missouri Right to Life in the race.

Missouri Right to Life’s, “retraction of their endorsement is a second witness to what I have seen of our current Senator and his actions,” Carter wrote. “While he would have you believe he is a ‘champion for the unborn,’ his voting record and actions in committees say otherwise.”

White said Friday, “it’s totally their choice,” on who Missouri Right to Life chooses to endorse and noted in the past he both has and hasn’t received their endorsement.

“The idea that the majority of Republicans aren’t pro-life is just ridiculous. That’s the bottom line,” White said, later adding: “I don’t know anybody on that floor that’s Republican, that’s not pro-life.”

Other Republican senators facing primary opponents could not be reached for comment.

With a U.S. Supreme Court ruling that could overturn Roe v. Wade imminent, abortion access and reproductive rights will likely become a focal point of next year’s legislative session that begins in January.

The outcome of the GOP primaries may also grow the conservative caucus’ ranks, helping them elect new leadership to the Senate. This past session, Missouri Right to Life had lobbied for lawmakers to adopt a Congressional map that would grant seven seats to Republicans — a proposal members of the conservative caucus had also called for.

Jim Lembke, a former state senator and legislative staffer running 100 PAC, a political action committee aligned with the conservative caucus, previously said the 100 PAC will not be involved in primaries with a Republican incumbent.

On KRTK-FM radio last week, Lembke said of all the votes taken this past session, failing to “defund” Planned Parenthood was the most disappointing.