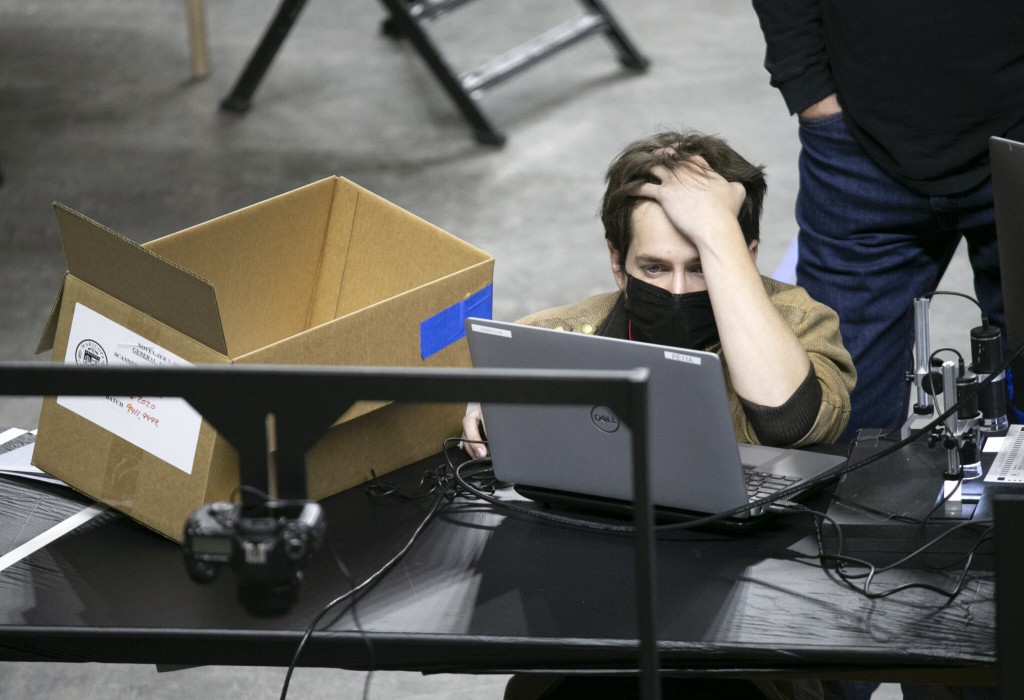 Maricopa County ballots from the 2020 general election were examined and recounted by contractors hired by the Arizona Senate in an audit at the Veterans Memorial Coliseum in Phoenix on May 24, 2021. (Photo by David Wallace | Arizona Republic/pool photo).

A Missouri man was indicted Tuesday by the U.S. Department of Justice for allegedly threatening to kill an Arizona election official who opposed a partisan review of the 2020 election, leaving a voicemail on the Republican’s cell phone telling him that “other people from other states are watching your ass.”

“So, I see you’re for fair and competent elections, that’s what it says here on your homepage for your recorder position you’re trying to fly here. But you call things unhinged and insane lies when there’s a forensic audit going on,” Walter Lee Hoornstra said in a May 19, 2021, voicemail to Maricopa County Recorder Stephen Richer, according to federal prosecutors.

“You need to check yourself. You need to do your f***ing job right because other people from other states are watching your ass,” Hoornstra said in the voicemail. “You f***ing renege on this deal or give them any more troubles, your ass will never make it to your next little board meeting.”

Richer told the Arizona Mirror that the voicemail — and dozens more like it — were left on his cell phone after the Twitter account for the Arizona Senate’s so-called “audit” falsely accused county elections officials of deleting electronic files.

The baseless claim was amplified by former President Donald Trump on May 15, 2021.

Richer said at the time that the claim from state Senate contractors and by other Trump allies resulted in many calls accusing him of illegal conduct.

In a commentary he wrote for CNN, Richer called the claim “laughably inaccurate” and noted that “audit” leaders conceded days later that the files weren’t deleted.

He told the Mirror on Wednesday that Arizona Senate President Karen Fann bears responsibility for feeding “The Big Lie,” embarking on a thoroughly flawed election review run by unqualified people who helped create Trump’s false election narrative and then abdicating her responsibility to oversee the “audit.”

“This voice message and every other one I received in mid-May is 100% Karen Fann’s doing,” Richer said. “She authorized morons (to run the ‘audit’), exercised zero oversight and absolved herself of any responsibility.”

Fann did not immediately respond to a request for comment.

A version of this story was originally published by the Arizona Mirror, a States Newsroom affiliate.