Missouri’s laws still allow for people to be prosecuted for spreading HIV through means such as biting—even though such instances are rare and saliva itself does not transmit HIV. 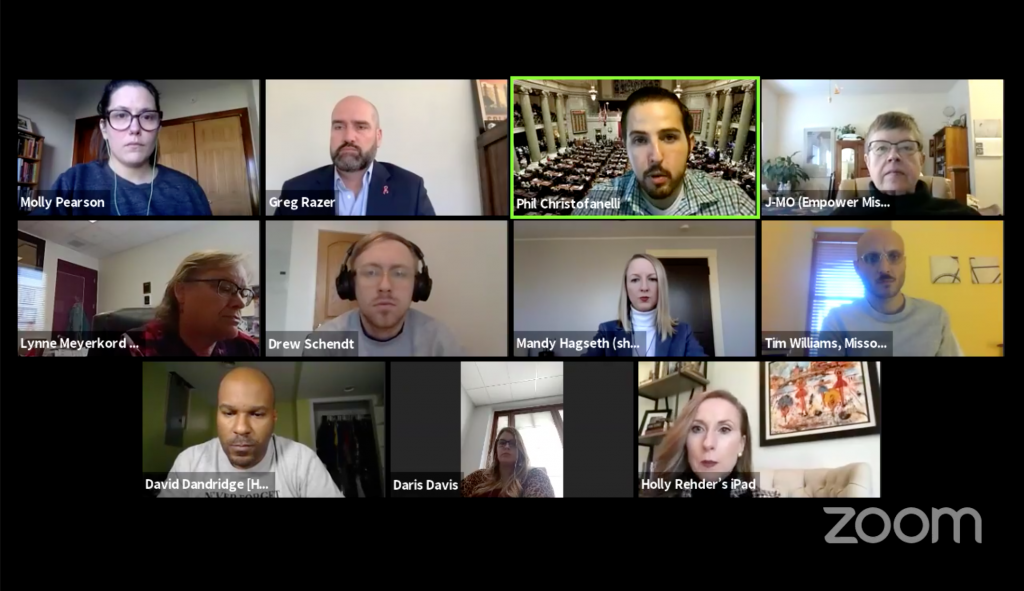 Lawmakers and advocates speak during a press conference Tuesday, Dec. 1, 2020, about legislation that aims to reduce the stigma and improve access to HIV treatment. // Image courtesy of the Missouri Independent.

The first step for a person to receive care for HIV is knowing whether they have it. But under a Missouri law passed in the late 1980s, it also means people living with HIV could face prosecution if they expose someone to it.

A bipartisan trio of Missouri lawmakers announced Tuesday that they plan to once again file legislation that aims to reduce the stigma and improve access to treatment.

Tuesday’s press conference coincided not only with the first day lawmakers could file legislation for the upcoming session, but also World AIDS Day, which seeks to raise awareness on how to prevent HIV, support people with it and remember those who have died from an HIV-related illness.

“This is always a conflicting day,” said Senator-elect Greg Razer, D-Kansas City. “I think for a lot of folks who have lost friends or loved ones to HIV and AIDS it’s a day to commemorate. But we’re also in a time to celebrate because you’re starting to see the light at the end of the tunnel.”

Human immunodeficiency virus, more commonly known as HIV, weakens the body’s immune system and if left untreated can develop into Acquired Immunodeficiency Syndrome, or AIDS. While there currently is no cure, with regular treatment HIV levels in a person’s bloodstream can be suppressed to low levels, resulting in effectively no risk of transmission.

In 2018, roughly 14,500 Missourians lived with HIV and an estimated 450 new infections occur each year, according to the Centers for Disease Control and Prevention. However, about 14 percent of Missourians with HIV were unaware of their status — preventing them from receiving needed care.

The rate of HIV-related deaths among people 13 years and older in the U.S. fell by nearly half from 2010 to 2017. LaTrischa Miles, a founding member of the Missouri HIV Justice Coalition, was first diagnosed with HIV on Dec. 15, 1995.

Today, it is no longer the death sentence it once was.

“Soon after my diagnosis I picked out my casket and made my burial arrangements,” Miles said. “Twenty-five years later, I am still here.”

HIV can be transmitted through blood, during sex, by sharing syringes or needles and through pregnancy, birth, or breastfeeding. However, Missouri’s laws still allow for people to be prosecuted for spreading HIV through means such as biting—even though such instances are rare and saliva itself does not transmit HIV.

For several years, Senator-elect Holly Rehder, R-Sikeston, has filed legislation in the House that would update Missouri’s laws to better reflect today’s science and broaden the state’s criminal code to apply to all serious infectious or communicable diseases—not just HIV.

Rehder aims to carry the legislation onto the state Senate and Rep. Phil Christofanelli, R-St. Charles County, said he will file legislation in the House this upcoming session. The bills would lessen the severity for those who knowingly expose others to infectious diseases so they are no longer the most serious of felony classifications. It would not apply to airborne diseases, like the novel coronavirus, lawmakers said.

“How awful that we name one virus above all others in our statutes,” Rehder said.

For Molly Pearson, the issue is a personal one. Both of her biological parents died of AIDS-related illnesses.

“To think that they could face felony charges for their health status if they were alive today is unacceptable to me,” said Pearson, an organizer with Empower Missouri and member of the Missouri HIV Justice Coalition.

Rehder said the strategy has been to have the bill brought up in multiple committees and emphasize educating fellow lawmakers on the personal impact the current laws have.

“Overcoming that stigma is the greatest barrier,” Rehder said, “but we are definitely making inroads in that.”

Razer and Christofanelli also plan to file legislation that would make Missouri one of only a few states with laws that reduce barriers to accessing preventative medication.

Razer and Christofanelli’s proposed legislation would allow pharmacists to screen and prescribe PEP so patients would not have to seek out a doctor’s appointment that they may not be able to access in the necessary 72-hour window. It would also allow pharmacists to prescribe a 30-day supply of PrEP after someone has received a negative HIV test result.

“If we get people who are at high risk to be on PrEP, then that’s another huge part of suppressing the virus out of existence,” Razer said.

Last session, the bill unanimously passed out of the House Professional Registration and Licensing Committee but went no further. Christofanelli said he believes it wasn’t a policy issue, but a procedural issue that stymied progress, especially in the face of the pandemic that upended the typical legislative session.

In 2018, of the top 220 counties most at-risk or experiencing an HIV outbreak, 13 counties were in Missouri — the fourth highest after Kentucky, Tennessee and West Virginia, according to the CDC. All 13 counties were located in the southern half of the state.

“Two of those counties are in my incoming Senate district,” Rehder said, later adding, “With Missouri laws as they stand, they work as a disincentive to knowing your status.”

Those states are also some of the ones hardest hit by opioid-involved overdoses. The opioid epidemic is contributing to a rise in HIV and AIDS, health officials say.

One way to mitigate that is syringe service programs, which provide opportunities for people to access clean needles and safely dispose of used ones. But in Missouri, they operate in a legal grey area as handing out needles is illegal under the state’s drug paraphernalia law.

After seven years of trying, lawmakers failed to pass a statewide program to monitor drug abuse this past session — leaving Missouri once again the only state without one.