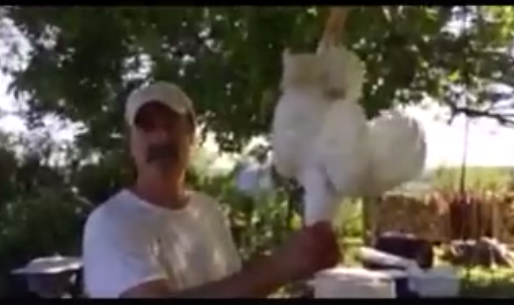 If you read that headline and guessed the lawmaker was Rep. Mike Moon (R-Ash Grove), congratulations, you win!

Today, in response to Missouri Gov. Eric Greitens’ call for a second special legislative session — literally an emergency session about restricting women’s reproductive rights — Moon posted a bizarre video to his Facebook page. He’s standing outside, over a barrel, and there’s a chicken hanging upside down in front of him.

“When Gov called for second special session I was in the middle of my summer job,” Moon says. “But like any good career politician, when I get the call” — and here he snaps a chicken’s neck — “I get back to work.”

Moon carves up the chicken and talks about the circle of life, or something. His shirt is covered in blood specks. Then he says:

“I think we need to get to the heart of the matter here” — now he is holding some innard piece of the chicken, possibly the heart? — “so today I’m filing a bill that will lead to the stopping of abortion in the state of Missouri, and I hope you will support it. So, stay tuned for more details.”

One commenter noted the disgustingness of the video. Moon replied:

“Just think how gross abortion is. I wasn’t trying to make a comparison, but simply to get a couple of points across: to the governor (I’m not on vacation and I’m just as much a career politician as he is) and if we truly are concerned about protecting the lives of the unborn, we should take action that will lead to the end of abortion.”

Here is the link to the video. Warning: it contains footage of Mike Moon killing a chicken!