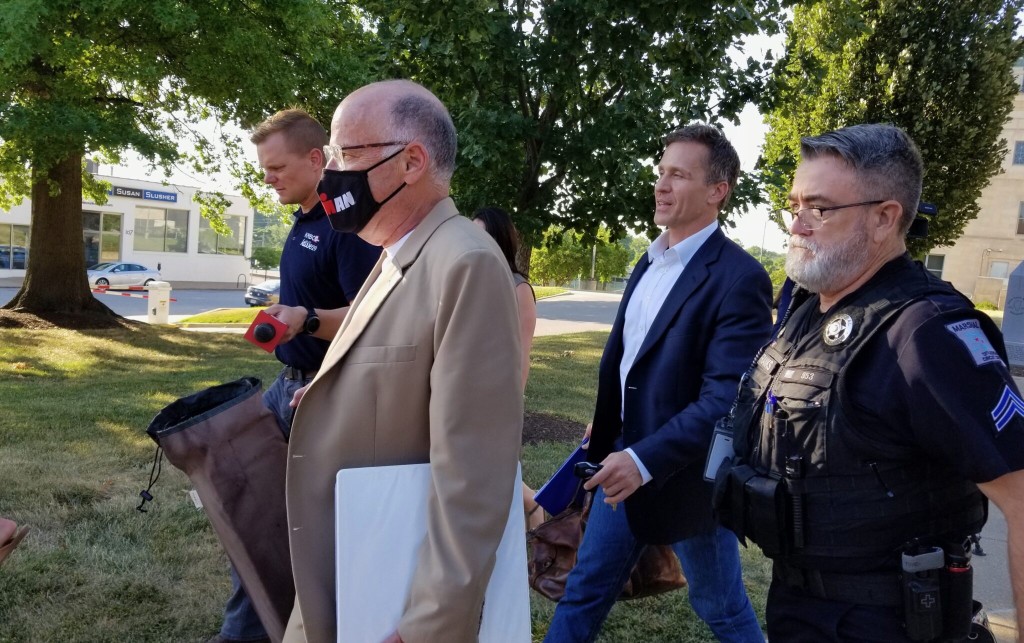 Former Gov. Eric Greitens, second from right, leaves the Boone County Courthouse in July with his attorney, Gary Stamper, masked, after a 7 1/2-hour deposition hearing in the child custody case stemming from his 2020 divorce. // Photo by Rudi Keller/Missouri Independent

For almost two weeks, the only thing known about the ruling in the court case over child custody jurisdiction between former Gov. Eric Greitens and his ex-wife, Sheena Greitens, was that a Boone County judge agreed to move it to a Texas court.

Associate Circuit Judge Leslie Schneider put her ruling under a tight seal, limiting access to the Greitens’, their attorneys and court personnel.

But when it arrived at the Travis County, Texas, District Court Clerk’s office Wednesday, it immediately became public.

The most anxiously awaited portion of the ruling was what Schneider would determine about allegations of spousal and child abuse made by Sheena Greitens — which became fodder for an $8 million ad campaign seeking to torpedo Eric Greitens’ U.S. Senate campaign.

But the un-redacted version of the 14-page ruling obtained by The Independent Friday devoted just a single paragraph to the allegations.

“The court finds by a preponderance of the evidence that there has been no pattern of domestic violence by either Mother or Father,” Schneider wrote. “The children have never been at risk or vulnerable at the hands of either parent.”

That finding, Eric Greitens wrote in an email to The Independent Friday evening, should settle whether or not he abused his sons. He blamed the media for publicizing the allegations Sheena Greitens made under oath.

“This was a lie, about me and my boys,” he wrote. “The judge found conclusively that the children were never even at risk or vulnerable. The only harm to my children, as the ruling makes clear, came from these lies and their promotion by a willing press.”

But Helen Wade, attorney for Sheena Greitens, said her client never alleged a “pattern” of abuse — instead claiming instances of abuse when Eric Greitens was angry or stressed.

“Dr. Greitens related under oath specific instances over a span of time, which were amply documented with third parties at the time, and she stands by her sworn statements,” Wade said in an email.

Sheena Greitens and Eric Greitens were divorced in 2020, two years after he resigned as governor as part of a deal to dismiss a felony charge. The divorce was filed in Boone County, where Sheena Greitens lived while working on the faculty of the University of Missouri.

Sheena Greitens is now on the faculty of the University of Texas and asked the courts in that state to take over supervision of the child custody arrangement soon after Eric Greitens announced in 2021 that he was running for the Senate.

In her ruling, Schneider said she agreed to move the case to Texas, because the children spend the majority of their time there, receive their medical care there and it is the most convenient venue. She also, over several paragraphs, cited the extra level of protection from public scrutiny that Texas law provides.

“In light of the fact that the laws of the State of Texas provide for more robust alternative dispute resolution, parenting coordination/facilitation, and the closure or sealing of the family court case, the negative allegations made by or between the parties could be made privately thereby diminishing or altogether eliminating the publicity of any response,” Schneider wrote.

In another passage, she cited the concerns of the guardian ad litem — a court-appointed representative of the children — to protect the children from seeing bad publicity about their family if the case remained in Missouri.

“She has confirmed that there are more options in Texas to protect the privacy of the parties and of the children,” Schneider wrote, adding that the guardian ad litem “is not confident that a Missouri Court can protect the children from the media interest in Missouri.”

But the Boone County clerk’s letter giving notice to the Texas court of Schneider’s ruling does not note that it is not public in Missouri. If it did, former Missouri Supreme Court Chief Justice Mike Wolff said, it would not have had any effect.

“She can seal all she wants to in Missouri, but she has no authority to seal in Texas,” Wolff said. “If somebody wants it sealed, they have to ask the Texas courts to seal it.”

Sheena Greitens’ attorney in Texas has filed a motion to seal the case there, but no hearing date has been set.

Because the judgment had not been made public, The Kansas City Star and Associated Press filed motions to intervene in order to argue that Schneider lift the seal. The Star reported Thursday on the ruling after obtaining a redacted copy and the AP issued a report based on the full ruling available from Travis County.

On Friday, the Star and the AP withdrew their motion to intervene, which had been set for a hearing on Monday. Schneider has set a hearing for Sept. 27 on “redaction of judgment and security level” to determine what portions of the ruling, other filings and exhibits will be public.

In her ruling, Schneider wrote about the difficulty of presiding over a case with national attention.

Gary Stamper, Eric Greitens’ attorney, said that the ruling would not satisfy his client’s critics.

“A judge has the authority to make a judgment about where a divorce will be heard, with careful consideration of how the parties and children may best be served,” he wrote in a statement to The Independent. “The court of public opinion weighs in mightily with a rush to judgment with very little information. These days, it is either total support or hatred.”

In his email to The Independent, Eric Greitens blamed the media for being quick to report on the allegations and giving his side of the story little attention.

“For me, the most important thing to protect my boys are two truths,” Greitens wrote. “One: they know now and always will that their Dad loves them with all his heart. Two: they will now, mercifully, know the truth about these terrible lies that were told about them and promoted with millions of dollars in media and political ads.”