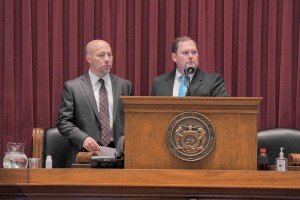 The Republican majority in the Missouri House on Tuesday beat back every attempt by Democrats to restore funding for Medicaid expansion to the budget for the coming fiscal year.

The House spent more than seven hours debating the 13 spending bills that comprise Missouri’s $32 billion spending plan for fiscal 2022 state operations. On voice votes, the House gave first-round approval to all 13 bills, plus a supplemental budget bill for the current year.

On Thursday, roll call votes on all 14 bills will send the budget to the Senate for its input.

The House version of the budget is $2.2 billion below the proposal made in January by Gov. Mike Parson, and the biggest difference is the absence of $1.9 billion for expanded Medicaid eligibility.

Democrats started early and took every opportunity to put the money back – including an attempt to tap money promised by the $1.9 trillion federal COVID-19 relief bill passed early this month – but could persuade only a handful of Republicans to break ranks with the majority.

“I think Medicaid expansion is wrong for Missouri,” House Budget Committee Chairman Cody Smith, R-Carthage said. “I think it is wrong for the state budget.”

Throughout the debate, Democrats argued the state’s unprecedented surpluses would be increased, not diminished, by approving the program. But Republicans argued that tight state finances won’t allow the new expense.

“It is just stubbornness and cruelty to refuse this money,” says state Rep. Sarah Unsicker, D-Shrewsbury.

The Affordable Care Act, passed in 2010, promised that states would pay no more than 10 percent of the cost of expanding Medicaid eligibility to households with incomes below 138 percent of the federal poverty guideline, or about $17,775 annual for a single person and $36,570 per year for a family of four.

The state pays about 35 percent of the cost of the existing Medicaid program.

After years of fruitlessly trying to persuade the Republican-led legislature to accept the deal, proponents used the initiative petition process to put it on the ballot and it passed in August with 53.3 percent of the vote.

Parson’s budget estimated that 275,000 Missourians would receive coverage, at a cost of $120 million in general revenue and $1.9 billion overall. Since the budget was proposed, Congress passed the American Rescue Plan, which offers states that have not expanded Medicaid an incentive to do so by cutting the state’s share of the existing program by 5 percent.

That change is worth about $1.15 billion to Missouri over the next two years.

For education, the budget granted initial approval in the House includes $3.6 billion for public schools under the foundation formula, increases basic support for colleges and universities to the fiscal 2020 appropriation levels, an increase for all the institutions because a portion of that money was withheld.

The budget also includes a 2 percent pay raise for state employees, plus additional raises for workers in the Department of Corrections to aid in recruiting corrections officers. It also has money for implementing the law to stop automatically charging 17-years olds as adults.

Throughout the day, Democrats complained that billions of dollars are being allowed to accumulate unspent in the state treasury. The state general revenue fund is expected to have a surplus of more than $1 billion on June 30, while other unrestricted funds, some related to federal COVID-19 relief, are amassing balances approaching $500 million.

The $1.9 trillion relief bill approved earlier this month will bring about $2.8 billion to the state for its general needs.

“We are sitting on a billion dollars plus and we have more coming in and it is time we started spending it,” says state Rep. Peter Merideth, D-St. Louis, as he unsuccessfully sought $50 million to eliminate rider fares on mass transit for a year.

Smith, however, said he has no confidence that federal spending can be sustained.

“They are deficit spending at an unprecedented rate,” he says