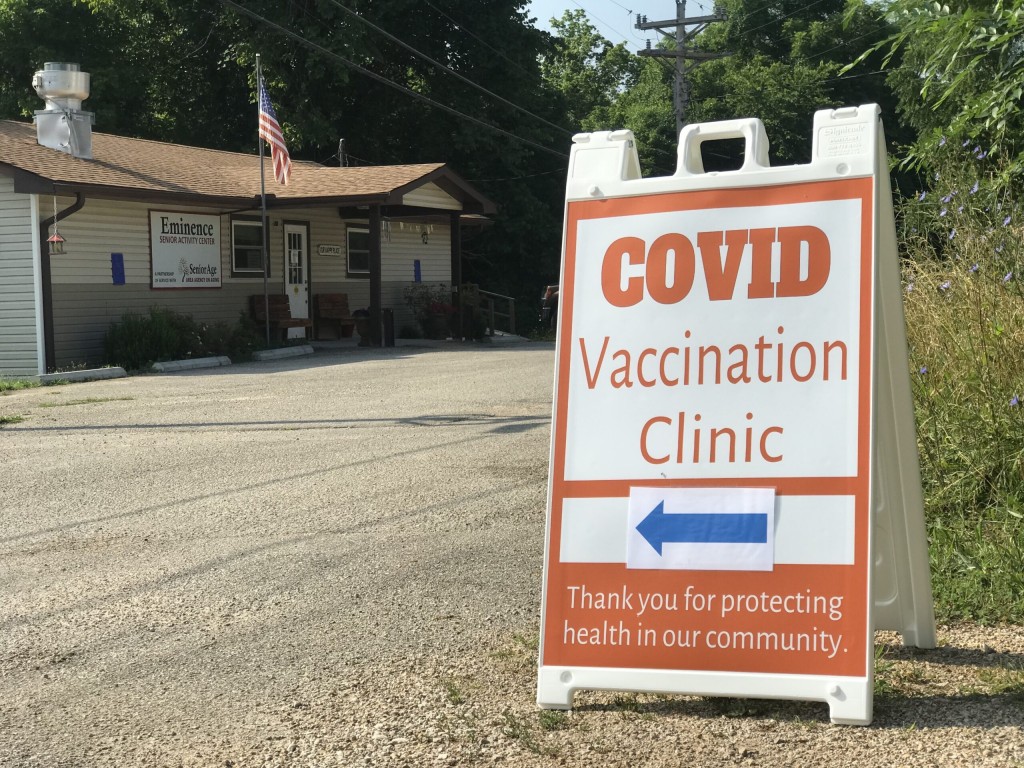 A sign marks the entrance to a drive-through COVID-19 vaccine clinic at the Shannon County Health Center on July 8, 2021. // Photo by Tessa Weinberg/Missouri Independent

The summer surge of infection tied to the easily spread Delta variant of COVID-19 is accelerating in Missouri, with state health officials on Wednesday reporting the highest case total since mid-January.

The Department of Health and Senior Services reported 2,995 additional cases, with at least one case in 105 of the state’s 117 local health jurisdictions. The seven-day average of reported cases rose to 2,144 per day, up one-third in seven days and more than triple the average of June 21.

Missouri last reported more than 3,000 additional cases on Jan. 15. The seven-day average is the highest since Jan. 27, when cases were falling steadily from their peak in November.

So far this month, the state health department has reported 33,656 additional cases, 75 percent more than the full month of June. In November, the state recorded more than 126,000 cases.

The worst report since the Delta variant was first identified in early May via wastewater monitoring comes as Gov. Mike Parson is set to announce a new state health director, an incentive plan to boost vaccination rates and as Chicago is urging anyone visiting Missouri to quarantine upon their return if they are not vaccinated.

The hardest-hit areas of the state continue to be in southwest Missouri. Of the 18 local health departments with month-to-date infection rates for reported cases above 1,000 per 100,000 residents, 17 are in the region that runs from Jefferson City to Joplin.

Hospitals in Springfield continue to struggle with surging inpatient numbers.

“The higher the COVID census the more strain on non-COVID resources,” Frederick wrote. “It’s not just about COVID. It’s about the whole system.”

Steve Edwards, CEO of CoxHealth, tweeted Tuesday that his hospitals are treating 147 Covid positive patients, “well beyond our capacity three weeks ago.”

147 Covid positive patients this morning. Well beyond our capacity three weeks ago. We now have the help of 175 travelers plus 46 scheduled to arrive by 7/26, and more coming thereafter. Grateful for the help as we look to expand our capacity everyday to care for our community. pic.twitter.com/iv7nnsmpfp

Misunderstandings between Springfield health officials and the state have delayed efforts to set up an “alternative care site” for patients recovering after hospital care but too sick to return home. The Springfield News-Leader reported Tuesday that paperwork issues forced officials to resubmit the request.

Statewide, 1,485 people were being treated as inpatients as of Sunday, up 200 in seven days and more than double the low for the year of 628 on May 27.

The Delta variant has much of rural Missouri in its grip. And while case numbers are rising rapidly in major cities, per capita infection rates so far this month remain below the statewide rate in St. Louis, St. Louis County, and Kansas City.

St. Louis County, for example, has added 3,097 cases so far this month, according to state data, almost double the full month of June.

St. Louis and St. Louis County put out a joint statement Tuesday warning that the surge was on its way.

Cases are up 34 percent from the previous week in St. Louis County, the statement read. In St. Louis city, cases are up 38 percent — and 80 percent of cases since May have been among Black residents of the city.

“Additionally, we have seen our regional positivity rate grow to around 10 percent, and we are aware that the ‘hot spot’ in southwest Missouri is moving northeast toward our region,” the statement read. “We are very concerned with these numbers and are actively studying further steps.”

The Chicago travel warning, reported by Kaiser Health News, was issued July 13 and renewed on Tuesday. It advises residents who are not vaccinated “to obtain a negative COVID-19 test result no more than 72 hours prior to arrival in Chicago or quarantine for a 10-day period upon arrival.”

Along with Missouri, the advisory also applies to Arkansas, Florida, Louisiana, Nevada, and the U.S. Virgin Islands.

The vaccine incentive program Parson will announce is intended to boost the state’s lagging vaccination rate, 13th worst in the nation overall, according to the latest CDC data.

On average, there are 9,846 vaccination shots being administered daily, about the same as a month ago and less than one-fifth the peak in mid-April.

The incentive program has had a rocky launch, with the state appealing the CDC’s ruling that it will not pay for rewards greater than $25 per person to receive a shot.

Parson has only reluctantly agreed to an incentive program.

“Now, when you start giving away incentives to do that, I think you’ve really got to think through that, because what’s it going to be next year if it’s something else?” Parson said in late June. “Are we going to start rewarding people to take a vaccine? And is that really what we should be doing?”

Burned out: Kansas City paramedics piled on overtime through pandemic