Massive case counts strain staffing for hospitals, lead schools to close to get infections under control 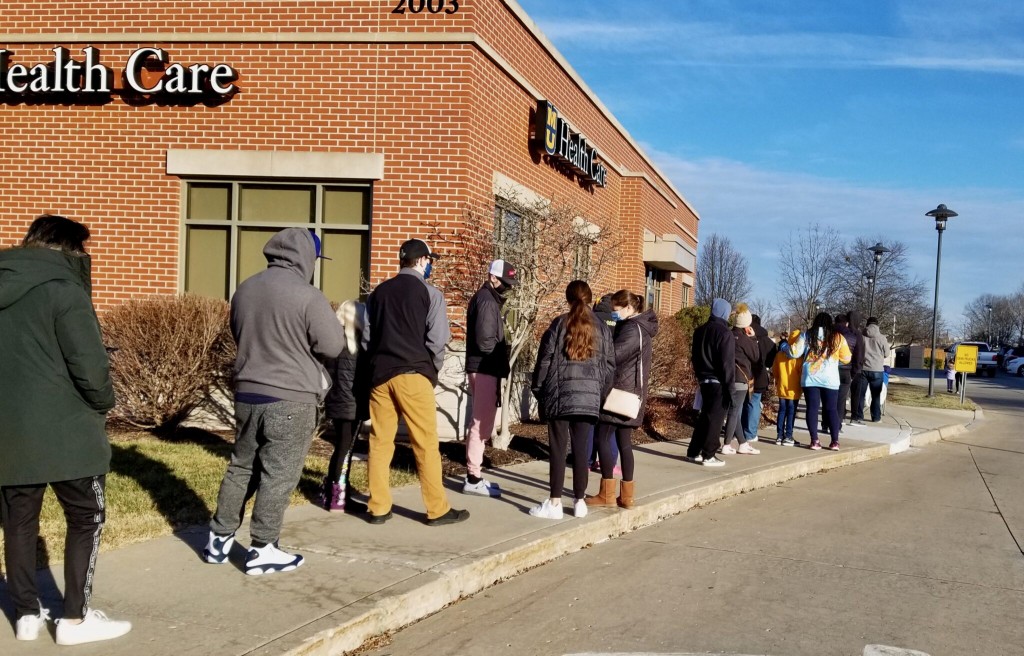 More than 70 people waited in chilly temperatures Wednesday in Columbia for a COVID-19 test. MU Health Care has one site where people can go for a test without an appointment. // Photo by Rudi Keller/Missouri Independent

Missouri has reported more cases of COVID-19 in the first 12 days of January than any full month of the pandemic so far.

As a result of the massive spike of infections tied to the omicron variant, hospitalizations are also at record levels and schools in many communities are shutting their doors.

And the state is likely not near the peak of cases.

“What I can say is that the case rates where omicron hit first, like New York and New Jersey, are still more than two times the rate we are seeing in Missouri and they haven’t leveled off yet,” said Marc Johnson, professor of molecular microbiology and immunology at the University of Missouri.

On Wednesday, the Department of Health and Senior Services reported 13,135 additional coronavirus infections, bringing the total reported since Jan. 1 to 128,949 — 2,828 more than the previous record set in November 2020, before vaccines were available.

Record hospitalizations accompany the avalanche of cases. There were 3,401 people being treated as inpatients, preliminary data for Monday shows, equal to 119 percent of the highest number seen prior to the arrival of the omicron variant.

As a result, hospitals are putting off non-emergency care and struggling to maintain staffing to care for the additional burden.

“Unlike when we were in the delta surge and Missouri was a bit of an outlier, we are not seeing staffing through agencies rushing to Missouri,” said Dave Dillon, spokesman for the Missouri Hospital Association.

And several school districts have called a halt to in-person instruction for the remainder of the week, seeking to use the Martin Luther King Jr. holiday on Monday to buy time for cases to subside.

The latest district to call off classes for a few days is Webb City in southwest Missouri. The district made the decision a day after posting a report to its Facebook page that it had 806 students out sick along with 50 staff members.

The district has about 4,400 students enrolled.

“Due to the continued increase in student and staff illness across the district, Webb City R7 Schools will be closed on Thursday, January 13th and Friday, January 14th to deep clean buildings and give everyone time to recover,” the Wednesday post stated.

The first evidence of the omicron variant in Missouri was found in a patient in early December. At the time, the state health department was reporting about 2,600 new infections daily. As of Wednesday, the seven-day average of reported cases was 11,625 per day and the climb is expected to continue.

Omicron, which is far more transmissible than earlier variants, is becoming the dominant strain in viral fragments found in wastewater samples taken during the first week of the month, said Johnson, who analyzes wastewater samples for the state health department. 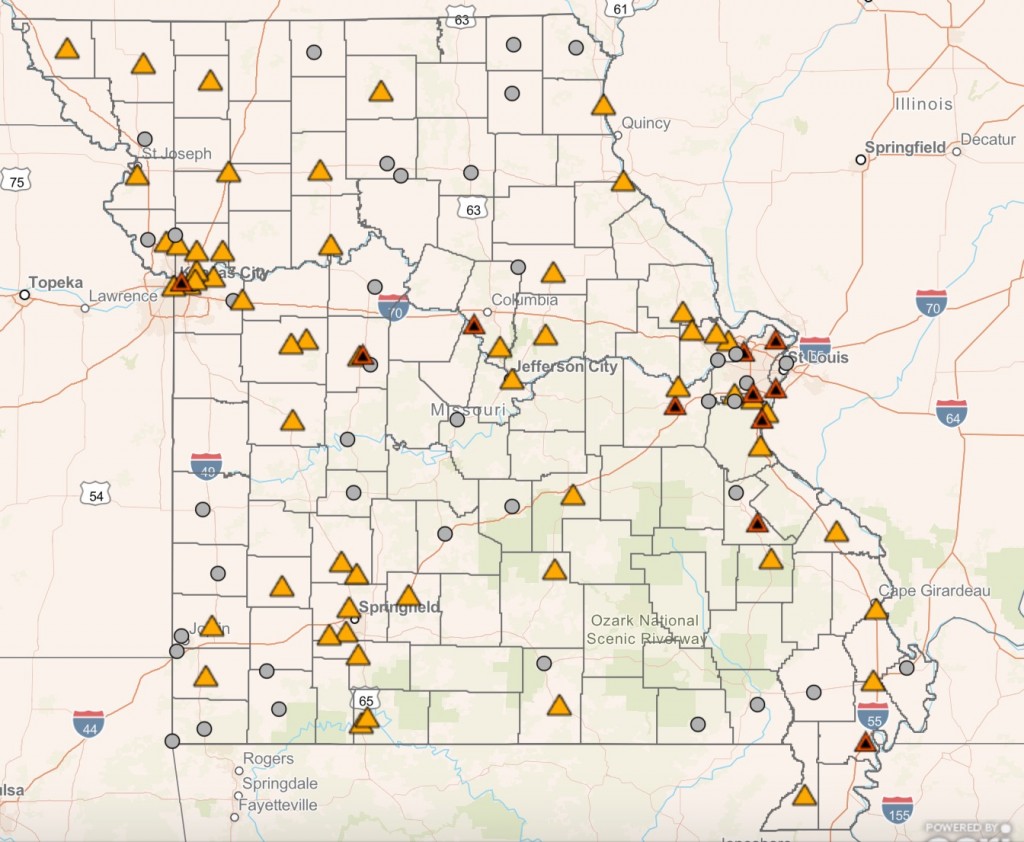 The samples taken during the week of Jan. 3 showed omicron was the only variant detected in 11 locations and was present alongside the delta variant in all other locations tested.

“The average for the state was 75 percent omicron,” Johnson said.

On Wednesday morning, a line of more than 70 people snaked its way from the door of the University of Missouri Health Care testing site in Columbia, around the building and out to the street.

In the 40-degree weather, people were bundled up, masked and trying to stay as far apart as possible. Phillip Montes, who said he was notified last week he was a close contact to a positive coronavirus infection, said he had been in line for about 20 minutes as he stood near the front of the line.

“I am just really fatigued,” Montes said. “I have been dealing with a little bit of congestion as well and a minor headache.”

The location that drew the crowd is the only place in Columbia where tests are available daily without an appointment. And despite MU Health’s decision to limit testing to people who have symptoms, the provider is processing record numbers of tests, spokesman Eric Maze said.

“On average, we were completing about 500 a day in November,” Maze said. “This past week, we averaged 1,052 completed tests per day.”

Over the past seven days, state health department data shows, 33.2 percent of PCR, or lab-analyzed, tests statewide have come back positive along with 18.1 percent of antigen, or rapid-result, tests.

The delta variant put Missouri in a national spotlight as it ravaged southwest Missouri in the summer before spreading nationwide. The omicron variant has slammed the state’s major cities, with cases equaling more than 3 percent of St. Louis County’s population of nearly one million people reported by the state so far this month.

“This last week has been sadly predictable in this pandemic,” said Alex Garza, chief community health officer for SSM Health, during a briefing Tuesday for the St. Louis Metropolitan Pandemic Task Force. “We knew that the combination of fewer mitigation measures, together with a highly contagious variant, would cause this virus to really run wild. And unfortunately that is what is happening.”

Statewide, the infections reported so far this month represent about 2 percent of the state’s population. In the seven Missouri counties of the St. Louis Metropolitan Statistical Area, the rate is just under 3 percent and in the 10 Missouri counties of the Kansas City Metropolitan Statistical Area, the rate is more than 2.3 percent.

Gov. Mike Parson has made no recent in-person statements about the situation. In his social media feeds, he has emphasized testing and vaccination but has not addressed the record hospitalizations or case numbers.

An omicron infection delayed the confirmation hearing Wednesday for Becky Ruth, Parson’s choice to be the Missouri Child Advocate. Ruth, like many who are seeking hospital care, posted on Facebook that she was in an emergency room Tuesday waiting for a bed.

In an earlier post, Ruth said she had been sick with COVID-19 since Dec. 29.

“Going to give me steroids, mucinex MRI of brain, Ultrasound of my carotid arteries, and endocrinologist consult,” Ruth wrote after speaking to a physician. “He said I would get moved to a room sometime today when one opens up. I’ve been in the ER since yesterday waiting on a room to open up. Continued prayers are appreciated.”

Clay Dunagan, chief clinical officer for BJC HealthCare, said during the task force briefing that hospital admissions in the St. Louis region are unsustainably high. While omicron may have a milder course in vaccinated people, it is making far more people sick, he said.

“Before this surge is finished, omicron will be responsible for many deaths,” he said.

With schools emphasizing in-person instruction and state rules that strictly limit the amount of time students can engage in remote coursework, keeping the doors open and classrooms fully staffed is a struggle.

That task wasn’t made any easier when the Department of Elementary and Secondary Education notified school districts this week that it had no more rapid-result antigen tests for schools. The state’s supplier, Abbot Labs, has not sent any tests for the past two weeks, the department’s weekly COVID-19 update stated.

In addition, the department stated it would not accept new applications for the free tests, until adequate supplies are available.

Tests currently in inventory should be reserved for people who have symptoms, the department stated.

“We know what a challenge this unfortunate situation is going to create for the hundreds of schools across the state that are taking part in our K-12 Antigen Testing Program and we want to express our sincere apologies,” the update reported.

Staffing is critical and a report presented Tuesday to the State Board of Education stated that many districts are able to fill only about half their daily vacancies.

“Right now you are seeing schools that are doing everything they can within their power and trying to be incredibly creative in the way they appropriate staff to school buildings,” Mallory McGowin, spokeswoman for the Department of Elementary and Secondary Education, said in an interview.

Schools are required by state law to provide 1,044 hours of instruction time each year. State rules allow 36 of those hours to be provided by alternate means, such as online classes, McGowin said.

“There is a whole host of reasons why keeping school doors open for as long as possible is best,” McGowin said. “Right now, the spread of COVID is not happening because schools are open. If we close school buildings, we are not going to see any less transmission because students would be interacting in other settings.”

The state has relaxed the rules on who can qualify as a substitute teacher, requiring 20 hours of online instruction, plus background checks, for anyone who has at least 60 hours of post-secondary education.

Districts also need bus drivers and other support personnel to stay open, McGowin said. Sedalia schools in Pettis County closed for a day last week because there were not enough drivers to bring students to class, she said.

There is a cluster of districts in southwest Missouri that are taking one or more days off this week along with Webb City. Those districts include Carthage and Neosho, the Joplin Globe reported.

When students stay home, it often means someone in the household must miss work to care for them, McGowin noted.

“There is a trickle-down effect in a community when a school cannot keep its doors open,” she said. “We have some real critical workforce shortages and a need for people to be present.”

University of Missouri hospital in Columbia reported it had 90 inpatients, including 33 who were vaccinated, on Wednesday afternoon. That is down from 98 on Tuesday, which was just below the peak of 102 in November 2020, Maze said.

As a result, the hospital is postponing non-emergency surgeries and planned hospital admissions for the remainder of the week.

“We are kind of reviewing each day on a case-by-case basis,” Maze said.

The latest confirmed data, from Sunday, shows 22 percent of hospital beds statewide are open, but that remaining capacity is not spread evenly. Only 18 percent of beds remain available in northwest Missouri, while 37 percent are open in southeast Missouri.

When Parson allowed the state’s emergency declaration, intended to support health care staffing, to expire Dec. 31, hospitals scrambled to get waivers to allow the use of unlicensed space and bring in staff who hold licenses from other states. The state health department responded quickly to those requests, Dillon said, but some professions, such as physicians, are not covered by the waivers.

“Our challenge right now is that we are having this surge happening and our staff are beginning to get caught up in the illness itself,” Dillon said. “A not irrelevant percentage of staff is calling in sick.”

When Ruth, who was a state representative before she was tapped by Parson to be child advocate, posted that she was waiting for a bed, she was experiencing what many Missourians are finding when they seek care, Dillon said.

“That is what is happening right now,” he said. “We have such a staffing and bed crisis right now that hospital emergency departments are serving as holding spaces.”