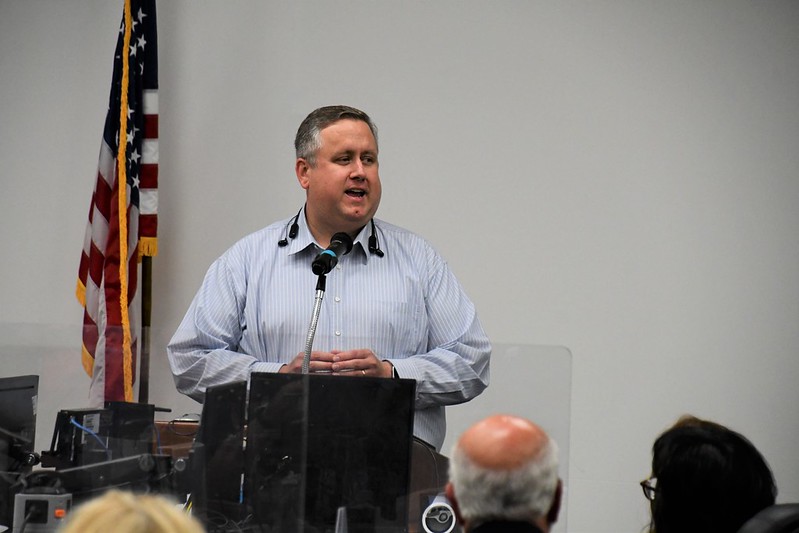 Robert Knodell, acting director of the Missouri Department of Health and Senior Services, addresses a group of state employees on May 24, 2021. // Courtesy the Missouri Governor’s Office

Missouri Gov. Mike Parson’s top adviser on COVID-19 is lashing out at vaccine falsehoods on social media, adding to the chorus of health officials around the state working to get shots distributed as the Delta variant continues to surge.

Robert Knodell, Parson’s deputy chief of staff and acting director of the Department of Health and Senior Services, has generally stayed in the background as he helped coordinate the state’s pandemic response.

He’s taken a more public role since he took over the health department in April. On Thursday, he put his criticism of vaccine falsehoods on his personal Twitter account.

“I’m not one to vent on Twitter, but enough is enough,” Knodell wrote. “All this rhetoric against COVID vaccines is a bunch of baloney.”

I’m not one to vent on Twitter, but enough is enough. All this rhetoric against COVID vaccines is a bunch of baloney. You don’t have to trust me…consult your family physician or pharmacist. If you don’t want to protect yourself, do it to protect your family, neighbors,

He urged Missourians to consult their doctors and pharmacists and get a shot to protect family, friends, “neighbors, or strangers who have vulnerabilities putting them at grave risk you may not even know about.”

Knodell’s comments echo those of Parson in urging Missourians to trust local voices for vaccine information.

But unlike Knodell, the governor’s criticism of misinformation has focused on trying to discredit news organizations that report on the increasingly dire situation around the state due to the Delta variant. Parson has also stopped short of a full-throated call for vaccinations, couching his public statements with criticism of government overreach and mentions of individual responsibility.

Meanwhile, state and local officials have ramped up the push for vaccinations as infection rates and hospitalizations in some parts of the state are surpassing the highest rates seen in the fall. On Friday, the state health department reported 2,865 additional COVID-19 cases, the ninth day this month cases have exceeded 2,000.

The seven-day average of reported cases, 2,286 per day, is up 27 percent in a week and 232 percent from the rate of 687 per day on June 23. Missouri has reported about 6.3 percent of all cases reported nationwide so far this month and, with Texas and Florida, 40 percent of the cases in the past week.

Parson unveiled a vaccine incentive program this week with prizes of $10,000 for adults and scholarships for young people. The Delta variant summer surge had already prompted a small increase in vaccination rates, with the highest seven-day average of the month so far, 11,348 shots per day, coming Wednesday, the same day Parson announced the incentives.

That rate is up about one-third from July 1 but about 2,000 a day below the peak rate in June.

Despite some skepticism on social media toward the incentive program, it had 100,000 people enter within its first 24 hours, Lisa Cox, a spokeswoman for the Department of Health and Senior Services, said during a media briefing Thursday.

She said the program’s webpage had over half a million people visit it the day it launched — the most web traffic the site has seen since February when vaccine demand was high.

“Our whole goal here is to get Missourians to take another look at vaccination and to give it some strong consideration,” Knodell said during Thursday’s briefing, later adding: “500,000 people looking at a website that's packed with factual information about vaccination in the state of Missouri… is a win already.”

Missouri has the 13th lowest number of doses administered per capita in the U.S., according to the Centers for Disease Control and Prevention.

The younger a person is in Missouri, the less likely they are to be vaccinated. While 57.7 percent of people over 18 have had at least one shot, all eligible groups below age 54 are below that average. Only 25 percent of children ages 12 to 14 have initiated vaccination and only 51.3 percent of adults 35 to 44 have had a shot.

To have a chance at winning $10,000, eligible residents must submit their info to enter. Residents only need to enter once, and their entry will be carried through for all five drawings.

State health department officials said they did not choose to pursue a model where vaccinated residents were automatically entered to win, because they wanted to ensure consent was given to have their vaccination record verified. In addition, state immunization registries may not include residents vaccinated on military bases or through federal retail pharmacy programs and would have left out some residents.

The Springfield-Greene County Health Department’s request for a temporary hospital for patients recovering from severe illness has been sent to the Federal Emergency Management Agency for approval, the release stated.

As the county waits, the hospitals of southwest Missouri are seeing more patients than at any other time in the pandemic. On Wednesday, the Springfield health department reported there were 265 inpatients, an all-time high.

Mercy Hospitals in Joplin and Carthage on Thursday to reach the highest number since the pandemic started last year, the Joplin Globe reported.

“We are really being challenged with space and resources,” said Jeremy Drinkwitz, president of the hospitals. “All the patients obviously that are here are necessary. The vast majority of them are needing some sort of oxygen in multiple forms. That’s a big part of why they’re here.”

And in Kansas City, hospitals are turning away patients and hospital leaders will ask for a new mask mandate for the metro area as infections surge because of the Delta variant.

“We are past the tipping point. We are in trouble,” Steve Stites, chief medical officer at the University of Kansas Health System, told the Kansas City Star.

Hospitalizations statewide, 1,632 as of Tuesday and rising on average 39 per day, are at the same level they were in October when administrators begged Parson for a statewide mask mandate. He refused.

The latest data on wastewater monitoring shows the Delta variant was the dominant strain in 38 communities in samples collected the week of July 5, up from 32 the previous week.

Marc Johnson, the University of Missouri professor who coordinates the wastewater project, predicted in late June that cases would double or triple statewide in July.

“It appears cases will continue to increase for the next two or three weeks before plateauing,” Johnson said Friday.

He’s basing that analysis on peak infection rates seen in other places where the Delta variant has led to higher case numbers, he said.

That helps it infect people faster, and those who contract the mutant contagion can infect others in four days, compared to six for the original strain.

While he quickly walked it back, President Joe Biden this week said Facebook is “killing people” because it tolerates so much misinformation about the effect of vaccines.

The Delta variant is showing that no community has reached the desired “herd immunity” where disease cannot spread because so many potential victims have resistance. But as the Delta variant took hold, local health officials were warning they were being overwhelmed while Parson used a soft-sell to push vaccines.

Springfield Fire Chief David Pennington called it “a mass casualty event in slow motion” in an early July tweet on the same day Parson said “I don’t think we need to be out there trying to scare people into taking a vaccine.”

And this week, when asked to comment on channels of disinformation, Parson blamed media outlets, including The Missouri Independent, that are reporting on the rapidly rising cases and hospitalizations instead of social media and other platforms that share vaccine falsehoods.

“That is total propaganda they are putting out to people everyday and it needs to stop,” Parson said.

Knodell’s tweet, he told The Independent, was prompted by some of the more than 1,600 comments on Facebook as Parson announced the incentive plan.

“If this experimental shot was actually good, you wouldn’t need an incentive,” one wrote. “Shame on you, you need (to be) thrown out of office and put in prison.”

On a post promoting the plan, another person wrote: “$10,000.00? Just about the right amount of money for my family to give me a proper burial after I die from getting vaccinated.”

The incentive plan also drew a rebuke from state Sen. Mike Moon, R-Ash Grove. Moon lives in Lawrence County, which has the 13th highest infection rate this month. Fewer than one-third of the counties residents have started vaccination.

Moon compared the vaccine to a free item that few people wanted.

In a message to The Independent, Knodell said what "really stirred me up was really the prevalence or volume of anti-COVID vax rhetoric I saw in social media reactions to our incentive program.

“Just a lot of debunked or discredited myths," he said. "And my concern is if good, well-intentioned people on the fence about getting vaccinated who may be vulnerable to the virus are swayed by untrue information.”

“None of the vaccines for COVID-19 contain metals or microchips,” the department said.

Tessa Weinberg of The Independent staff contributed to this report.