Jurisdictions with mask mandates averaged 15.8 cases per day for every 100,000 residents, compared to 21.7 in unmasked communities. 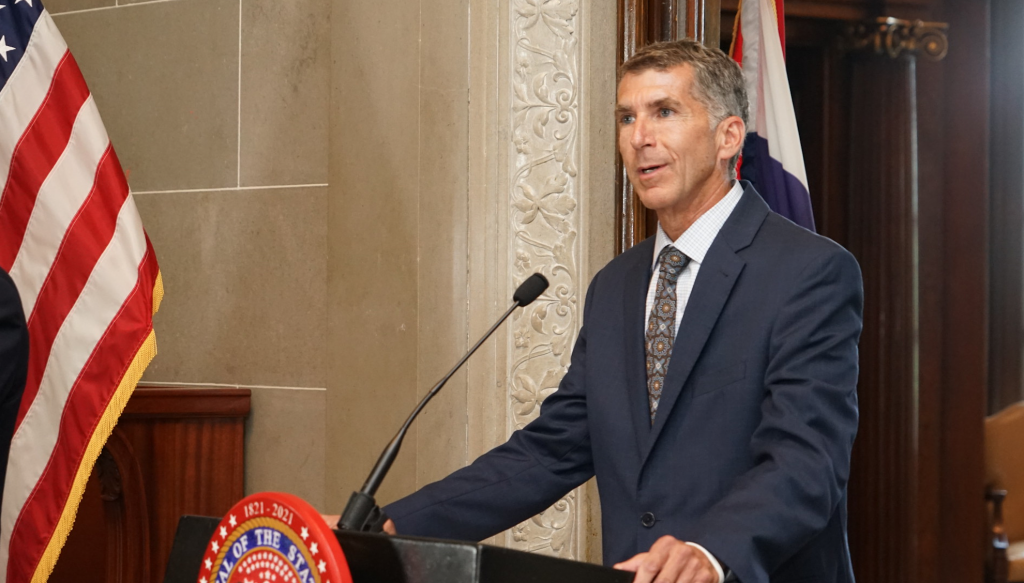 Donald Kauerauf, the director of the Department of Health and Senior Services, speaks during a press conference at the Missouri Capitol in Jefferson City on July 21, 2021. // Photo courtesy of Missouri Governor’s Office

Mask mandates saved lives and prevented COVID-19 infections in Missouri’s biggest cities during the worst part of the delta variant wave, an analysis by the state Department of Health and Senior Services shows.

But the analysis, conducted at the request of Gov. Mike Parson’s office in early November, was never made public and was only obtained by The Missouri Independent and the Documenting COVID-19 project after a Sunshine Law request to the department.

The study compared infection and death rates in St. Louis, St. Louis County, Kansas City and Jackson County with the rest of the state. New state health Director Donald Kauerauf wrote in an email that the study’s findings showed the effectiveness of mask mandates and forwarded it to Parson’s office.

The analysis wasn’t included in material the department prepared for cabinet meetings, the emails show. Neither the health department nor Parson’s office responded to requests for comment asking why the data has not been shared publicly.

The comparison showed infection rates in “masked” jurisdictions were higher than the rest of the state in the six weeks prior to the emergence of the delta variant. Case rates then fell below other regions as the surge gathered force in late May and have remained lower since that time.

The four jurisdictions imposed their mask mandates in late July and early August, as the delta variant wave was peaking.

Mask requirements remain in place in St. Louis and St. Louis County. The Jackson County Legislature voted to end its requirement in early November, and the mandate in Kansas City ended Nov. 5 except for schools and school buses.

There are a number of variables that impact infection and death rates, the health director wrote in a Nov. 3 email. But the effectiveness of masks is clear, he wrote.

"I think we can say with great confidence reviewing the public health literature and then looking at the results in your study that communities where masks were required had a lower positivity rate per 100,000 and experienced lower death rates,” Kauerauf wrote.

Mask mandates have been one of the hottest political issues of the year, pitting the authority of local officials against political opposition to masks led by Republican state officials.

Parson has spoken out repeatedly against local mask mandates, calling them "WRONG" in a tweet and a contributor to the erosion of public trust. Attorney General Eric Schmitt has gone a step further, suing St. Louis, St. Louis County, Kansas City and Jackson County to block enforcement of their mask mandates.

“Jackson County has imposed an unlawful, arbitrary, and capricious mask mandate that is not supported by the data or the science,” the opening sentence to Schmitt’s lawsuit against Jackson County states.

“More than anything it confirms for us what our public health experts have been saying, that masks are an effective tool for reducing community transmission,” Dunne said.

Although Schmitt has sued, Parson and the state health department have allowed local jurisdictions to decide the health measures suited to their constituents, St. Louis County Executive Sam Page said in a statement issued Wednesday.

The records show the analysis was produced in response to a request from Alex Tuttle, Parson’s liaison to the health department.

“Can you provide examples of local mandates and how those mandates impacted the spread of COVID in those areas?” Tuttle wrote in an email sent Nov. 1 to Kauerauf.

The department completed the analysis about 48 hours later.

Despite opposition from Parson and lawsuits filed by Schmitt, Kauerauf, backed masks to control the spread of the coronavirus in his first news conference.

“I rely (on) the experts at the CDC on that. Everything I’ve read, everything I’ve seen: masks work,” Kauerauf said at his first news conference after starting his job in September.

The Independent and the Documenting COVID-19 project provided Schmitt’s office with Kauerauf’s emailed comments and the charts created by the health department. The analysis will not change its stance against mask mandates, spokesman Chris Nuelle wrote in an email.

“We dispute this premise and these charts,” Nuelle wrote. “We’ve been clear that Missourians should have the right to make their own decisions, and that government bureaucrats shouldn’t be mandating masks or vaccines. We will continue to fiercely litigate our lawsuits against mask mandates in Missouri.”

In a follow-up statement, Nuelle questioned whether mandates caused cases to be lower in masked communities. In the period before the delta variant wave, when those communities also had a mask rule, case rates were higher than the rest of the state, he wrote. Case rates for the four jurisdictions fell below the rest of the state when those original mask orders were lifted.

State health department data alone can’t explain the effectiveness, or lack thereof, of mask mandates, without a fuller analysis of vaccination rates, behavior and time. But the data does show that in three of the four jurisdictions – Kansas City, St. Louis and St. Louis County – per capita case rates for the pandemic are in the bottom quarter of 118 local health jurisdictions, and per capita deaths are in the bottom third.

Jackson County has the highest case and death rates among the four, ranking 52 out of 118 in per capita cases and 27 of 118 for per capita deaths.

Officials in Kansas City and Jackson County have not provided comment on the health department’s analysis.

But Missouri's decision not to release public health data showing a demonstrable difference in COVID-19 infection and death in masked communities is notable and reflects the deep political polarization surrounding pandemic policies, one expert said.

"It's devastating to see what the Missouri governor did since mask policies do reduce the spread of COVID-19 and would reduce the number of people who become sick and die in Missouri," said Julia Raifman, an assistant professor of health law, policy and management at Boston University who oversees the COVID-19 U.S. State Policies Database. "It's devastating to see policymakers not implement policies that would reduce the number of children who are growing up without their parents."

The delta variant was first detected in Missouri in early May by researchers at the University of Missouri who analyze wastewater samples collected weekly. Since the arrival of the variant, the state health department has reported new infections for about 5.3 percent of all Missourians.

But in three of the four jurisdictions with mask mandates, case rates were below other jurisdictions in the metro areas. That was especially true in St. Louis and St. Louis County, where coronavirus infections equaling less than 4 percent of the population have been reported since April 30.

Schmitt’s lawsuits against all four jurisdictions remain active, despite the actions in Kansas City and Jackson County to end the mandates.

A major issue in Tuesday’s hearing was the impact of a decision by Cole County Judge Daniel Green, who ruled last week that health orders designed to stop the spread of COVID-19 that were issued by local health departments violated the Missouri Constitution.

There is a hearing scheduled for Wednesday afternoon on Kansas City’s motion to dismiss Schmitt’s lawsuit.