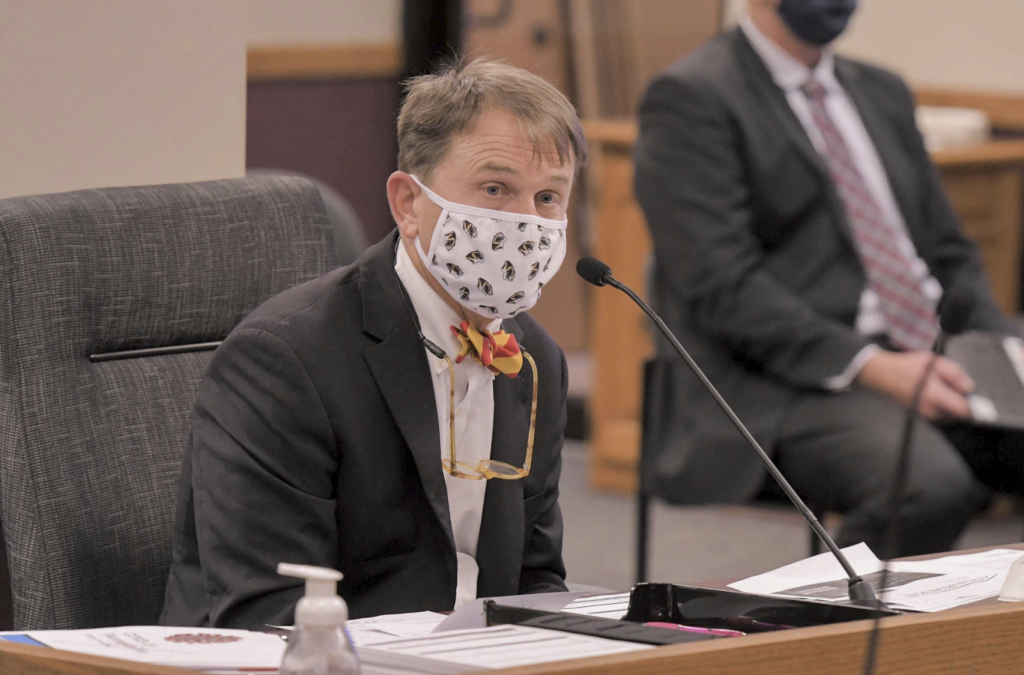 Randall Williams, director of the Missouri Department of Health and Senior Services testifies before the House Special Committee on Disease Control and Prevention on Nov. 10, 2020. (Photo by Tim Bommel/House Communications)

A week out from Randall Williams’ resignation as Missouri Gov. Mike Parson’s health director, there remains little clarity on what spurred his sudden departure.

On Monday, the governor’s office refused to release a copy of Williams’ resignation letter, arguing that it was considered a closed record under the state’s Sunshine Law.

That follows a formal announcement last week that Williams resigned — without any reason given or any statement from Williams.

Days later, Parson praised Williams’ performance as director of the Department of Health and Senior Services but offered little explanation for the reasons he asked him to step down without a replacement in place.

Caroline Coulter, the deputy general counsel for the governor’s office, said Monday that Williams’ resignation letter is closed in its entirety. She cited a section of the Sunshine Law that permits closure of “individually identifiable personnel records, performance ratings or records pertaining to employees or applicants for employment.”

“No record will therefore be provided,” Coulter wrote in a letter in response to The Independent’s request.

Resignation letters from cabinet officials and agency heads have been released and made public in prior administrations.

In response to an open records request for the letter, Lisa Cox, a spokeswoman for the Department of Health and Senior Services, said “we do not have this in our possession.”

Williams did not respond to requests for comment over the course of the last week.

Parson told reporters Thursday that he asked both Williams and his former Chief Operating Officer Drew Erdmann to resign.

“We talked about things,” Parson said, “the future, we thought it was the best thing to do to part ways at this point.”

Parson noted that the last year has been both stressful and “extremely difficult” for members of his cabinet, who have been on the front lines of responding to the pandemic.

“I think it’s important to realize that they never had a break, never had the opportunity they couldn’t come to work,” Parson said, later adding: “And I’ll say this as governor, I expect so much out of my cabinet. I truly do. I push and I push hard. But also, I expect high quality work. I expect people to do their jobs.”

Parson stressed that both Williams and Erdmann have done “outstanding work” for him and wished them well. Both officials moved to Missouri in 2017 under former Gov. Eric Greitens, who appointed Williams and created the position of COO for Erdmann.

Williams’ resignation capped a contentious four years as Missouri’s top health official, in which he was embroiled in controversy for issues ranging from allegations of conflicts of interest surrounding the state’s nascent medical marijuana program to national headlines accusing him of tracking women’s menstrual periods.

Most recently, he became one of the most prominent faces of Missouri’s pandemic response and COVID-19 vaccine rollout.

Adam Crumbliss, the director of DHSS’ Division of Community and Public Health, said during a Thursday meeting of Missouri’s Advisory Committee on Equitable COVID-19 Vaccine Distribution that Williams was returning to North Carolina to spend time with his elderly mother and family.

Knodell has played a key role in overseeing the state’s vaccine distribution and quickly jumped into his new position. On Wednesday, he was part of a White House forum outlining Missouri’s efforts to reach people with disabilities amid the rollout.

Williams was an obstetrician and gynecologist, and while Knodell has no medical background, Parson said he was “a logical candidate” because of his role closely overseeing the vaccine’s distribution. Parson said that when the deputy director position for DHSS was eliminated by legislators, that left a gap to replace Williams.

“But look, this is a very temporary assignment,” Parson said, “and I needed to put somebody over there just stability-wise to make sure I had a good idea to make sure things are going okay in the Department of Health, and I thought it was important to send one of my own people in there.”

Parson said he hopes to recruit a new department director within the next two months, and suggested he had previously wanted a change earlier.

Parson did not definitively say whether Erdmann’s role will be replaced, which has been a point of contention for lawmakers who have long questioned the value of the job itself.

Jean Maneke, attorney for the Missouri Press Association, said the provision cited by the governor’s office to withhold Williams’ letter has not been tested by the courts in terms of how it applies to resignation letters.

“If you resigned, you’re done. You’re out. And I don’t really see that that has any personal information in it that justifies closing,” Maneke said.

On the other hand, Maneke said the legislature’s refusal to accept Rep. Rick Roeber’s resignation earlier this month could make a case for arguing a resignation can be refused in some instances.

“What is there in that letter that would constitute personal employee information that would justify closing it?” Maneke said. “Now, I suppose I might feel a little differently if we find out that there are a lot of details in that letter, and this is a person who’s a whistleblower. That, clearly, there’s some protection for.”