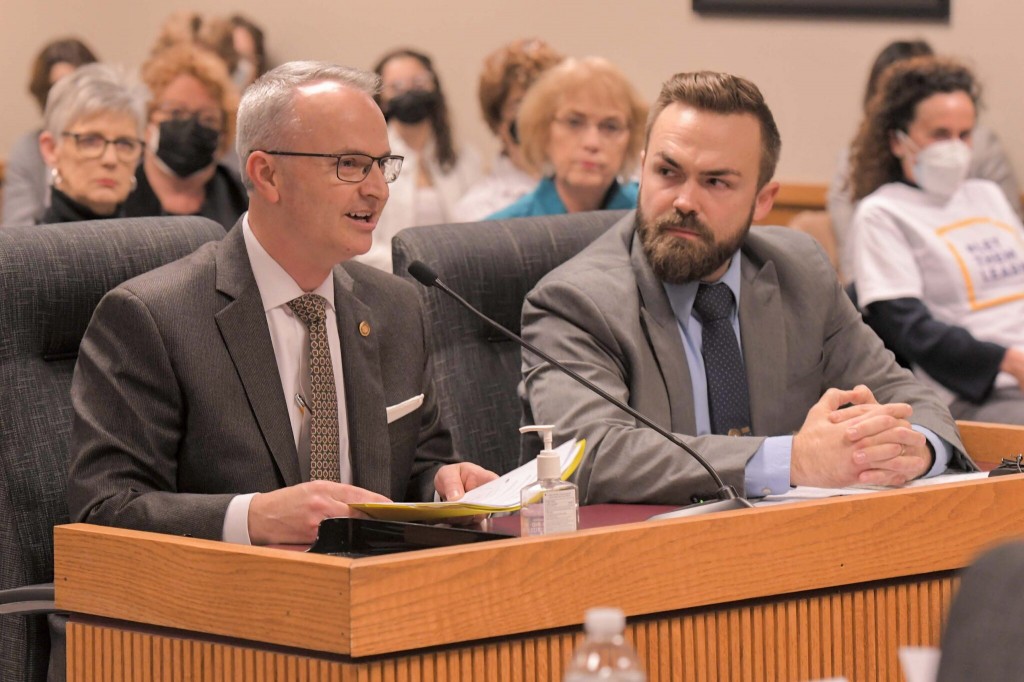 Reps. Doug Richey, R-Excelsior Springs, and Nick Schroer, R-O’Fallon, present their bills that would establish versions of a parents’ bill of rights to the House Elementary and Secondary Education Committee on Jan. 11, 2022. // Photo by Tim Bommel/Missouri House Communications

Missouri Republicans brought debate to the floor this week over a “parents’ bill of rights” to ban critical race theory from K-12 teaching.

The two bills a Republican supermajority is pushing include HB 1474 and HB 1995. The bills establish a process for parents to review curriculum and formally object to teaching specific subjects in public schools.

The deranged uncles in the Missouri Legislature are trying to force school districts to notify parents five days in advance if a divisive or controversial topic is going to be taught. The notification allows for parents to remove their child from any such objectionable teachings—including health education relating to human sexuality and sexually transmitted diseases.

Provisions in HB 1995 add teeth to these thou-shalt-nots.

The state is looking to set up a narc-line for parents to send objections to the school district and Missouri DESE. If a school district is found in violation of any of these bans, a $1000 to $5000 fine can be assessed. Money from the fines are to be split between the parent who brought the objection (20%) and the Missouri Empowerment Scholarship Fund (80%), which is a 501(c)(3) set up to advocate for privatizing education.

Isn’t that neat? A snitch bounty for outraged Karens!

The bills are expected to merge and given Missouri’s General assembly makeup—138 out of 195 MO legislators are conservative—the bills will likely become law.

For their part, Missouri Democrats are in hysterics.

State Rep. Ian Mackey says a parent could object to verified facts under the purposed law, including the existence of dinosaurs. State Rep. Mark Sharp said that a purge of class curriculum and books is the kind of government censorship seen in authoritarian societies.

“Do we really want Missouri to join other countries like China, Russia, and North Korea that are too afraid to tell people the real history of their nation?” says Sharp, a former teacher. “I don’t want my daughter growing up in an America where pictures of police fire-hosing Black protestors in Birmingham are hidden away like Beijing hides pictures of the Tiananmen Square Massacre.”

Missouri republicans say relax; there’s nothing to worry about.

State Rep. Nick Schroer believes the bill he proposed is all about building trust between parents and educators.

“What we can do, and I think what schools should be doing, is teaching all history and nothing but,” says Schroer. “Not fairy-tale versions, not politically skewed versions of history.”

It’s been reported over and over that critical race theory is not taught in Missouri K-12 schools. Gov. Mike Parsons told the Missouri Times in July that “Missouri teaches diversity, equity, and inclusion,” and not CRT.