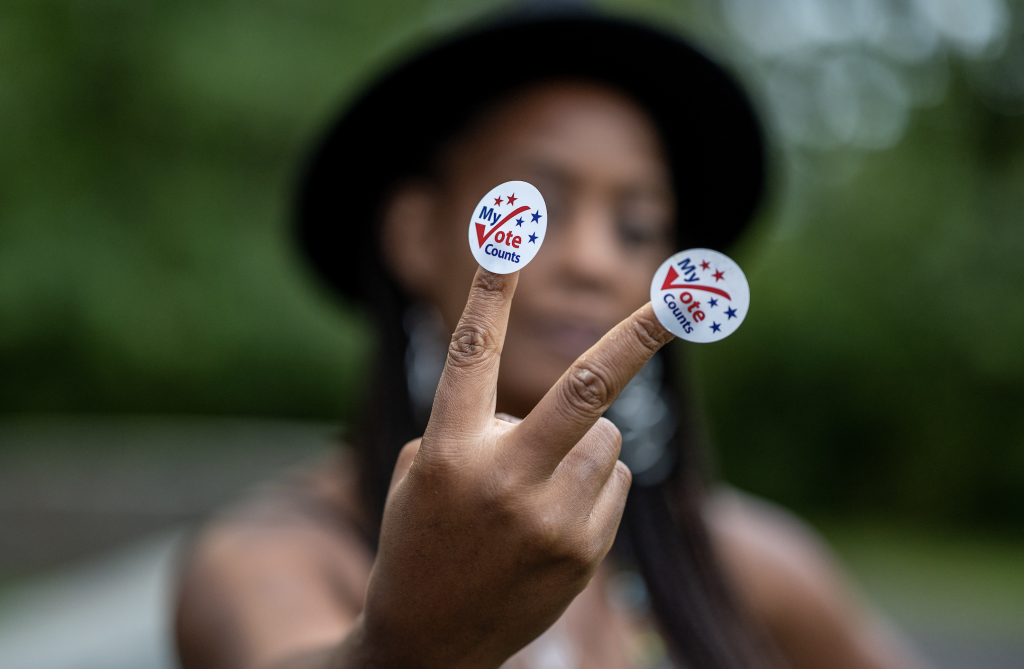 Voters around the state have been taking advantage of Missouri’s first ever no-excuse early voting period the last two weeks.

The early voting period ends at 5 p.m. Monday, and polls will be open for everyone else from 6 a.m. to 7 p.m. on Tuesday.

Among the races on the statewide ballot this year include picking a replacement for retiring U.S. Sen. Roy Blunt and deciding whether Missouri will become the 20th state to legalize recreational marijuana use.

Here’s a quick rundown of the biggest races in the state.

Schmitt was among the GOP attorneys general who joined unsuccessful lawsuits seeking to overturn the 2020 presidential election, and he’s continued to align with the discredited stolen-election theory. His campaign website, for example, references “glaring illegal actions involving our sacred elections” in 2020.

Busch Valentine is a nurse and heiress to the Anheuser-Busch family fortune who has largely self-funded her quest for the U.S. Senate by pouring millions into the race since joining it earlier this year.

A first time candidate for elected office. Busch Valentine has at times stumbled on the stump, most notably before the primary when asked about her position on transgender rights. But her focus heading into the race’s homestretch has been abortion rights, specifically Schmitt’s role in enacting Missouri’s strict abortion ban. A recent ad from her campaign features a woman who was denied an abortion during a medical emergency because of the state’s ban.

The only other statewide office on the ballot this year, and the only one still held by a Democrat, the state auditor’s race features Republican Scott Fitzpatrick, Democrat Alan Green and Libertarian John Hartwig Jr.

Green, who previously represented Florissant for seven years in the Missouri House, is running to replace her by asking voters whether the office can serve as watchdog for state government if it is controlled by the party holding all other levers of power in Missouri.

Fitzpatrick, who currently serves as state treasurer, has said he will not back down when audit findings show problems in agencies led by his fellow Republicans. He points to his time as chairman of the House budget committee when he oversaw inquiries into the administration of GOP Gov. Mike Parson.

Amendment 1 would allow the state treasurer to invest in highly rated municipal debt and give lawmakers the power to loosen investment limits even further. It extends the time limit on direct investment in federal securities to seven years, along with adding municipal bonds and expanding legislative power to allow other investments.

Its proponents say the amendment, if approved by voters, would give the treasurer more flexibility to increase yields on idle state funds. Critics worry it will be used to inject politics into the investment process.

The most hotly contested constitutional amendment on this year’s ballot, Amendment 3 would remove bans on marijuana sales, consumption and manufacturing for adults over 21 years old, with some caveats.

The amendment includes automatic expungement for certain people who have nonviolent marijuana-related offenses on their record. People who are still incarcerated would have to petition the courts to be released and have their records expunged.

Critics of the proposal argue the expungement provisions don’t go far enough, and have questioned adding marijuana criminal provisions to the constitution. The most consistent complaint, however, is that Amendment 3 builds on a licensing system set up for medical marijuana that resulted in few successful applicants from Black and Brown communities. Since those with current medical marijuana business licenses would be first in line to get the recreational licenses, they argue Amendment 3 reinforces the inequity.

Amendment 3 supporters say the system’s racial inequities would be addressed through the 144 “micro licenses,” where applicants must be a resident from a ZIP code with high marijuana incarceration rates or meet other such requirements. The expungement provisions may not be as sweeping as some would prefer, proponents admit, but they will still be life-altering for those with marijuana convictions on their record.

And they argue Amendment 3 is Missouri’s best chance to legalize marijuana, since a Republican-dominated Missouri General Assembly is unlikely to do it in the future.

If Missouri voters approve Amendment 4, Kansas City will be required to increase funding for its police department.

A new law passed this year aims to raise the minimum portion of Kansas City’s budget that must be devoted to the police department from 20% to 25% — a $65.2 million increase.

However, the Missouri constitution states that the legislature cannot require a city to increase an activity or service beyond that mandated by existing law, unless a state appropriation is made to pay the city for any increased costs.

So lawmakers also placed a proposed constitutional amendment on the ballot to provide an exception for the Kansas City Police, if approved by the voters around the state.

Amendment 5 would create a 16th state department, called the Department of the National Guard, elevating the Guard from its current status as a division of the Department of Public Safety. It also restates the mission of the Guard, saying its job is to “protect the constitutional rights and civil liberties of Missourians, and provide other defense and security mechanisms as may be required.”

Backers of the amendment say it will provide a more direct line of communication between the Guard and the governor’s office, including a more direct path for making budget requests.

The last question voters will see on their ballot is whether the state should hold a convention to consider amendments to or a complete revision of the state constitution.

The current constitution was approved by voters in 1945 and the state is in the longest period since it was established in 1821 without an overhaul of the basic law. The question of whether to hold a convention has been on the ballot every 20 years since 1922.

If approved, the next step would be an election of delegates at a special election called by the governor within six months. There would be two delegates from each of the state’s 34 Senate districts and 15 at-large delegates elected statewide.

The convention would begin meeting within six months of the election and work until it was finished considering constitutional changes.

Any changes receiving a majority from the convention would be submitted to voters as a series of amendments, each voted on separately, or a comprehensive document approved or rejected in its entirety.

The Independent’s Rudi Keller and Rebecca Rivas contributed to this story.