Prefiled proposals seek to crack down on demonstrators, violence 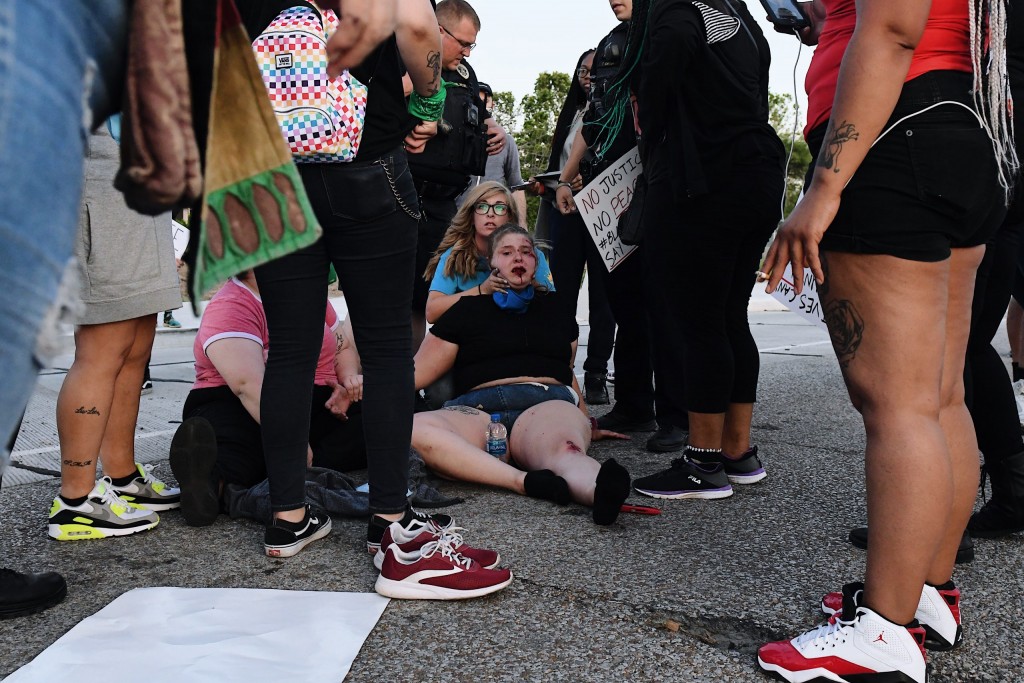 Anna Knipfel of Mexico is supported by other protesters while waiting for medics to arrive, after getting hit by a car during a protest June 1 in Columbia. Knipfel suffered injuries to her ankle, wrist, hip and abrasions to her head and face. She returned to the demonstrations the next night in a wheelchair. // Photo courtesy Madeline Carter/Columbia Daily Tribune.

Reacting to a summer marked by protests against police violence around the country, a pair of Missouri lawmakers are pushing for legislation shielding drivers from liability if they hit protesters with their cars.

State Sen.-elect Rick Brattin, R-Harrisonville, is sponsoring a bill that would bar lawsuits against drivers for injuries to a person who “was blocking traffic in a public right-of-way while participating in a protest or demonstration” unless the driver’s action “constitutes gross negligence.”

Brattin’s bill is a wide-ranging proposal that targets demonstrations in numerous other ways. It would also yank benefits from public employees convicted of unlawful assembly or rioting, withhold state funds from local governments who cut police budgets too much and impose a prison term of 5 to 15 years for vandalizing a monument on public property.

In the Missouri House, state Rep. Adam Schnelting, R-St. Charles, also wants to shield drivers who injure or kill demonstrators with their cars. His proposal, which covers both civil and criminal liability, would apply to people fleeing an “unlawful or riotous assemblage” if “the person reasonably believes he or she or any occupant of the motor vehicle is in danger.”

The General Assembly convenes Jan. 6 for its annual session. Legislative staff began assigning bill numbers and publishing pre-filed bills on Dec. 1. Early filing assures a low bill number but does not give legislation a priority spot for debate.

Brattin, a former House member who is returning to Jefferson City after two years as Cass County auditor, did not respond to several messages seeking comment on his bill.

Schnelting, in an interview last week, told The Independent that he only intends to protect people unwittingly caught in a riot.

The scenario he envisions, Schnelting said, is a 20-year-old mother with two infants in the back seat caught in a violent situation where rioters are trying to break into her car.

“She has a right to flee to protect herself without being charged,” he said.

Both unlawful assembly and rioting have specific definitions and penalties in state law. Schnelting said he is not trying to legalize ramming peaceful protesters with a car, even if their message is personal.

“I have been screamed at plenty of times,” Schnelting said. “That doesn’t mean that I am in danger.”

Despite the legislators’ intentions, the door opened by the bills, if they became law, is troubling, said Frank Bowman, a professor of law at the University of Missouri who specializes in criminal justice.

“Let’s assume I am spooked by the Black Lives Matter demonstrators or the Proud Boys on the corner and I speed away,” Bowman said. “Apparently there is no limitation on how prudent I have to be. This is basically open season on any pedestrian who happens to be within one block, two blocks, three blocks.”

Throughout the nation this summer, and even into the early fall, people poured into the streets following the Memorial Day death of George Floyd, a Black man in Minneapolis who died after a white police officer put his knee to Floyd’s neck for eight minutes and 46 seconds as he lay prone and handcuffed.

Some protests turned violent, for a variety of reasons that ranged from instigators within the protesters to provocation by police or opportunistic criminals using cover of the crowd to loot businesses.

The scenes were not new in Missouri, which saw similar protests followed the 2014 death of Michael Brown in Ferguson and again in 2017 when former St. Louis police officer Jason Shockley was acquitted in the 2011 shooting death of Anthony Lamar Smith.

What was different this summer nationwide, and in some parts of Missouri, was the size, duration and extent of the protests.

In St. Louis, the day of peaceful demonstration on June 1 was followed by violence that included the shooting death of a retired St. Louis police captain outside a looted pawnshop. In response, Krewson imposed an overnight curfew.

In the run-up to November’s election, many Democrats focused on the grievances expressed by the crowds in the street–police brutality, institutional racism and social inequities. Republicans, playing to their base, focused on the violent incidents and called for the public to back police actions.

It is uncertain what, if any, impact the proposals to shield drivers would have had this summer in two incidents, one in St. Louis and the other in Columbia. No police reports have been made public that provide a complete account.

In St. Louis, a FedEx truck driving through a protest struck and killed Barry Perkins in the early morning hours of May 30, dragging him almost two blocks.

In Columbia, on the evening of June 1, Black Lives Matter protesters blocked one of the busiest downtown intersections. Two young women were hit when motorists unwilling to go around the protests instead drove through them. Anna Knipfel and Behonsay Williams were injured in two separate incidents about a half-hour apart.

A car just rammer through sending a protester flying. pic.twitter.com/kcz0XFb3Sa

There were other incidents as well. In one of the first St. Louis protests this summer, State Rep. Rasheen Aldridge, D-St. Louis, said people were in the Target parking lot in Brentwood. They weren’t disrupting traffic, but a truck drove through the crowd. The driver later circled back and shot a gun out of the window, Aldridge said.

No one was injured.

“You’re trying to criminalize individuals who are taking to the streets, but then embracing another behavior of saying ‘it’s okay, if you see people in the streets, just run them over,’” Aldridge said.

Schnelting said his proposal is tied to the definitions of unlawful assembly and rioting in state law, both of which require at least six people to gather for the purpose of breaking the law using force or violence.

“I want to keep it narrow,” he said. “I have no intention of expanding that.”

The provisions that would shield motorists aren’t the only ideas put forward by lawmakers inspired by the summer protests.

A handful, proposed by minority Democrats, would do things like ban or limit chokeholds and make it easier for law enforcement agencies to obtain records of misconduct by job applicants.

State Rep. Sara Walsh, R-Ashland, filed a bill making it a misdemeanor punishable by up to a year in jail for directing the light from a laser pointer at a police officer, firefighter, emergency medical worker or other uniformed officer.

Walsh could not be reached for comment on her bill.

Bowman said the bill would criminalize often innocent behavior. It requires “no proof of a mental state requiring an intent to cause harm,” he noted. “The mental state is only an intention to direct the laser pointer at the person.”

The use of laser pointers by protesters was first noted among democracy demonstrators in Hong Kong, who used the powerful lights to disrupt cameras and facial recognition devices used by authorities.

Schnelting, like Brattin, also wants to limit benefits available to people convicted of breaking the law at protests.

He’s sponsoring a bill to deny unemployment payments for 18 months to anyone convicted of rioting. The provision in Brattin’s bill would apply only to public employees, taking away health, disability, retirement and other benefits for any state or local government employee convicted of unlawful assembly or rioting.

The aim is to deter violence, Schelting said, not protest.

“Protesting is a uniquely American thing to do,” he said. “Rioting on the other hand is much worse.”

Aldridge, however, said the bill unfairly targets the poor.

“You’re basically telling me that there’s going to be an extra penalty if you’re poor, and don’t have a job,” he said. “But if you’re a rich person and do something like this and have a job, you’re not going to get that penalty.”

The idea behind the proposal is not new, Bowman said. The law is filled with provisions that are “collateral consequences of conviction,” such as losing the right to own a firearm after a felony conviction.

“To the extent anybody cares, the overwhelming consensus among criminologists and criminal law scholars is that these kinds of collateral consequences are almost invariably a lousy idea,” he said.

And whether either would be applied to anyone is questionable. The St. Louis County Prosecuting Attorney’s office received two referrals from law enforcement for rioting charges in the past 12 months and declined to file on either defendant, according to Chris King, spokesman for the office.

Brattin’s bill creates new causes of action for civil suits, allows the use of lethal force to protect property by private individuals designated to protect it, denies bail to people convicted of crimes related to demonstrations and creates new crimes for use against protesters.

In civil court, Brattin would allow people to sue their local governments for “gross neglect” in protecting property. Defacing publicly owned monuments or public buildings would be a Class B felony, punishable by up to 15 years in prison under one provision of the bill.

And among the new crimes it creates is a felony for unlawful traffic interference.

In March, a federal judge ruled that the St. Louis ordinance on “impeding” traffic was unconstitutional — throwing out a law that city police have used to justify arresting, macing and tasing citizens during Ferguson and Stockley verdict protests.

U.S. District Judge Henry Autrey found that the municipal ordinance entitled was unconstitutional because it was too vague and didn’t include a free-speech exception.

In his opinion, Autrey wrote that the ordinance could apply to “two neighbors who stand and converse in a residential street, or to persons gathering for a neighborhood block party. It applies to a single person or group of persons standing on a sidewalk waiting for an Uber to arrive.”

Javad Khazaeli, civil rights attorney at Khazaeli Wyrsch, said the federal case provides the reasoning to why the proposed shield is unconstitutional.

“This is written that if somebody sees a protest that they don’t like, especially if it’s blocking traffic, that person can just drive through the protest and kill as many people as they want,” he said. “And then just afterwards (say), ‘Oops, I felt I was afraid.’ And then you fight over what is a reasonable assembly and that’s insane.”