Little-discussed proposals would give lawmakers more say in investment policies, create a new department and authorize a constitutional convention 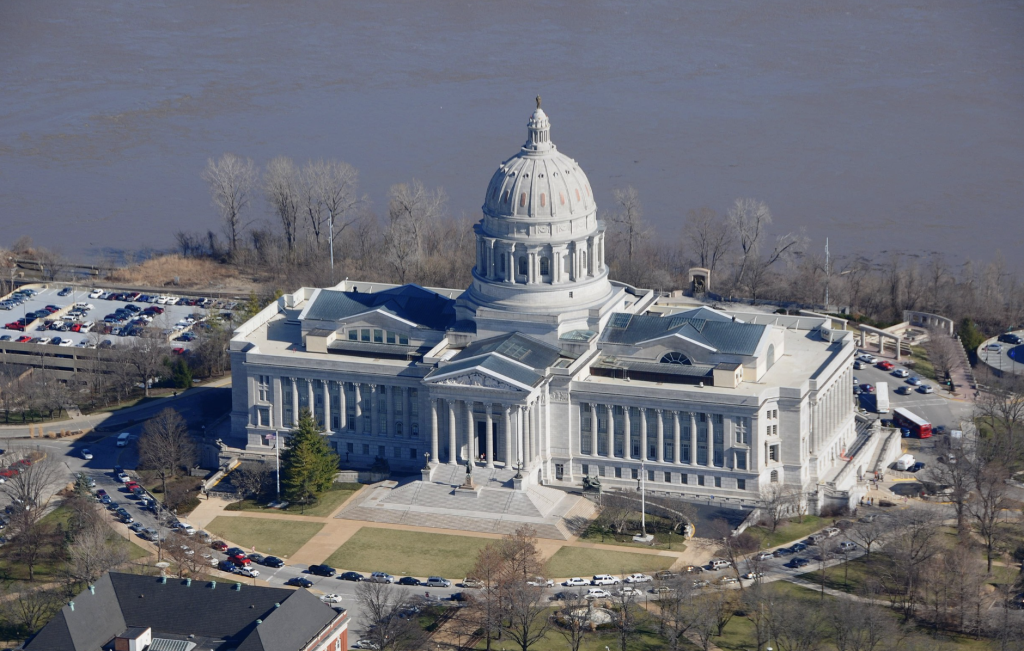 Aerial photograph of the Missouri State Capitol Building. // Via WikiCommons

In the first four months of Missouri’s fiscal year, the state earned $42.8 million in interest for the general revenue fund, more than in the past two full years combined.

The enormous increase is due to two factors — a record surplus in the fund and the rapid rise in interest rates.

On Tuesday, voters will be asked to give the state treasurer more flexibility in making investments, with the intent of pushing yields on idle state funds higher. Amendment 1 would allow the treasurer to invest in highly rated municipal debt and give lawmakers the power to loosen investment limits even further.

Former state Rep. Aaron Griesheimer, who sponsored the legislation before voters, said the goal was to increase yields at a time when the return on state money hovered at about one-half of 1%.

In October, state investments earned 2%, and the Federal Reserve decision Wednesday to hike rates for the fourth consecutive month means those returns will go higher.

Higher current yields don’t mean the change isn’t needed, he said. Interest rates are likely to go down again at some point, he noted.

Amendment 1 is among three statewide ballot measures voters will see Tuesday that haven’t received much attention and have no organized campaigns either for or against them. The others are Amendment 5, which would put the Missouri National Guard into its own cabinet-level department, and the question of whether to hold a state Constitutional Convention, put before voters every 20 years.

Two other ballot measures, Amendment 3, which would legalize recreational marijuana sales and use, and Amendment 4, which would give lawmakers power to set the budget for the Kansas City Police Department, have generated controversy for months.

The Missouri Treasurer is the custodian of state funds and deposits money not needed for daily operations in interest-bearing accounts, which can be invested for up to five years in federal securities or in commercial investments with extremely low risk.

During October, the average daily balance of all funds in the treasurer’s portfolio was $15.5 billion. That is up from about $7.2 billion when lawmakers were considering Amendment 1 in 2021.

Amendment 1 extends the time limit on direct investment in federal securities to seven years, along with adding municipal bonds and expanding legislative power to allow other investments.

Lawmakers voted overwhelmingly for the bill that put Amendment 1 on the ballot. But one, state Rep. Peter Merideth, on Wednesday sent constituents a newsletter telling them he had changed his mind.

In an interview, Merideth said he is concerned the legislature would bar the treasurer from making investments in companies based on their policies on environment, social or governance issues. He cited the recent decision by the Missouri State Employees Retirement System to withdraw $500 million from investment manager BlackRock, pushed by State Treasurer Scott Fitzpatrick as punishment for advancing what he called “a woke political agenda.”

State law already puts one policy goal ahead of returns for state investments. The treasurer is directed to consider whether the state should deposit money in institutions that have poor ratings for compliance with the Community Reinvestment Act.

If he was sure the only use of the new power was to prudently increase the return on state deposits, Merideth said he would still be for it.

“If I thought that was all that was happening, I wouldn’t have a problem,” he said.

Griesheimer said he understands Merideth’s concerns, but discounts them. His biggest worry, he said, is that lawmakers would allow investments that are too risky.

“You have to trust that certain individuals will do this in good faith,” Griesheimer said.

Backers of the amendment during legislative debates said it would provide a more direct line of communication between the Guard and the governor’s office, including a more direct path for making budget requests.

In this year’s budget, the National Guard received $47.4 million for its operations. The ballot title voters will see states that passage of Amendment 5 would increase that by $132,000 per year.

The Guard has about 12,000 men and women in Army and Air National Guard units. Their main job for the state is to respond to emergencies, whether a weather disaster, the COVID-19 pandemic or civil disturbances.

Amendment 5 restates the mission, stating the Guard’s job is to “protect the constitutional rights and civil liberties of Missourians, and provide other defense and security mechanisms as may be required.”

During a hearing in February, state Rep. Adam Schnelting, R-St. Charles, said the purpose was to give the Guard the same status it has in other states. Only Massachusetts along with Missouri doesn’t have a military department or similarly named entity, he said.

The main difference, he said, is a clearer chain of command.

“This just makes that a lot more clear and that is what we are aiming to do with this bill,” he said.

Merideth also told constituents in his newsletter that he will oppose Amendment 5.

The change is unnecessary, he said. There is no evidence that deployment of the Guard has been delayed because of its current organizational status or that it has not been able to present budget requests because of departmental interference, he said.

The change of mission is disturbing, he said, because Missouri shouldn’t need any military defense not available from the federal government.

“I don’t think whether its own department matters really that much,” Merideth said.

The last question voters will see on their ballot is whether the state should hold a convention to consider amendments to or a complete revision of the state constitution.

The current constitution was approved by voters in 1945 and the state is in the longest period since it was established in 1821 without an overhaul of the basic law. The question of whether to hold a convention has been on the ballot every 20 years since 1922.

If approved, the next step would be an election of delegates at a special election called by the governor within six months. There would be two delegates from each of the state’s 34 Senate districts and 15 at-large delegates elected statewide.

The convention would begin meeting within six months of the election and work until it was finished considering constitutional changes.

Any changes receiving a majority from the convention would be submitted to voters as a series of amendments, each voted on separately, or a comprehensive document approved or rejected in its entirety.

Many view the 1945 document as outdated, while others point to long amendments that should be statutes.

The constitution approved by voters in February 1945 was just under 27,000 words long. An amendment protecting stem cell research, added by initiative in 2006, was about 2,000 words long. The medical marijuana amendment, approved in 2018, is almost 8,000 words.

Even observers who think the constitution needs revision worry about doing so in the current political climate.

“A constitutional convention right in the middle of a culture war would bring out ideologues of all stripes, and you would have the fiercest political strife,” former state archivist and historian Ken Winn said earlier this year. “Everybody with an agenda would be trying to write their ideas into the constitution.”