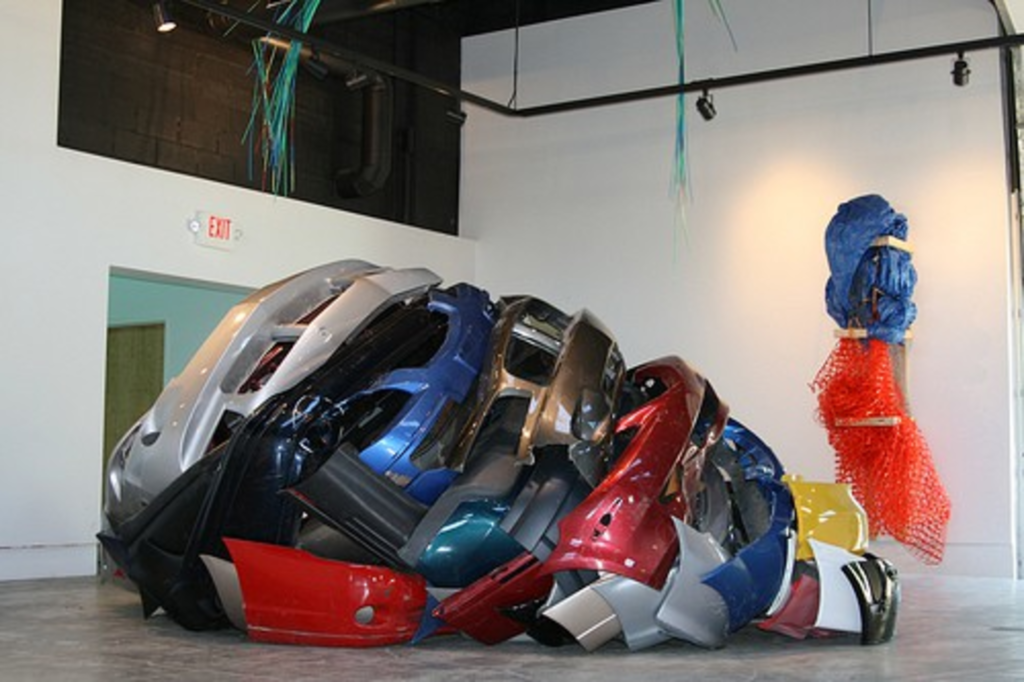 Too many installation artists think that they can skate over conceptual and aesthetic rigor and just throw materials together, and we won’t know the difference. We do. Kansas City Art Institute graduates Miles Neidinger and Justin Farkas, on the other hand, can actually take ordinary objects and leftover building materials and create meaningful art from them.

Neidinger’s garden-hose sculptures enchant and frustrate. Knotting and twisting the hoses, he creates shell-like sculptures and titles them cryptically — or poetically, depending on your mood — giving them names such as “Remove from me fat stranger possibility things that do not belong.” The best of the three pieces here is the one made of yellow hose, the flexibility of which makes the knots look elegantly organic and patterned. By contrast, the gray hose, with its sharp white crease, looks pinched, inflexible and angry.

The problem with repurposing ordinary materials into art is when they don’t change. New York artist Tom Friedman is a master — he has embedded a decorative spiral, made from pubic hairs, in a bar of soap, and made self-portraits sculpted from a single aspirin. With a piece made of car bumpers, Neidinger looks as if he’s trying to steer his work in a new direction. He leaves dirt and grime on the bumpers, anchoring them in their own realm rather than making them into something new. The bumpers are all too different from one another to allow any sort of pattern to emerge, though decorative patterns have transformed his pieces in the past. If this is a new direction, then the piece should probably be paired with similar new pieces, for context.

On the gallery ceiling, however, Neidinger weaves colored drinking straws and gold twist ties through the struts, creating a lyrical sculpture that alters that otherwise pedestrian space. It works.

Farkas’ work is reminiscent of early installations by Swiss artist Thomas Hirschhorn, with their humble materials and earnest, hardworking ethos. Each of Farkas’ sculptures is a sort of wood scaffolding that becomes an open container for other homely materials such as window blinds and measuring tapes. What’s striking about each piece is its complete cohesiveness. Nothing seems random or careless. One piece is almost completely white plastic sheeting and white window blinds, with some smartly placed color lending the work a sense of purpose. Rather than being off-putting by containing too much randomness, the sculptures entice with their subtly edited aesthetic.

“GNO Go,” one of the smaller sculptures, has a petite, celestial air about it. With wood, a couple of white windowpanes, white fluorescent tubes and some plastic, Farkas creates two portals: one delicately obscured by the plastic, the other to be walked through. Such minimalism feels well-grounded and deftly thought-out.

Both artists rely on ordinary objects in ways that are more accessible and cogent than many other artists working with the same materials. Dense and light, chaotic and controlled, their work conveys authority and achievement.