Miles Ahead: Jazz Academy students are rising up in double time 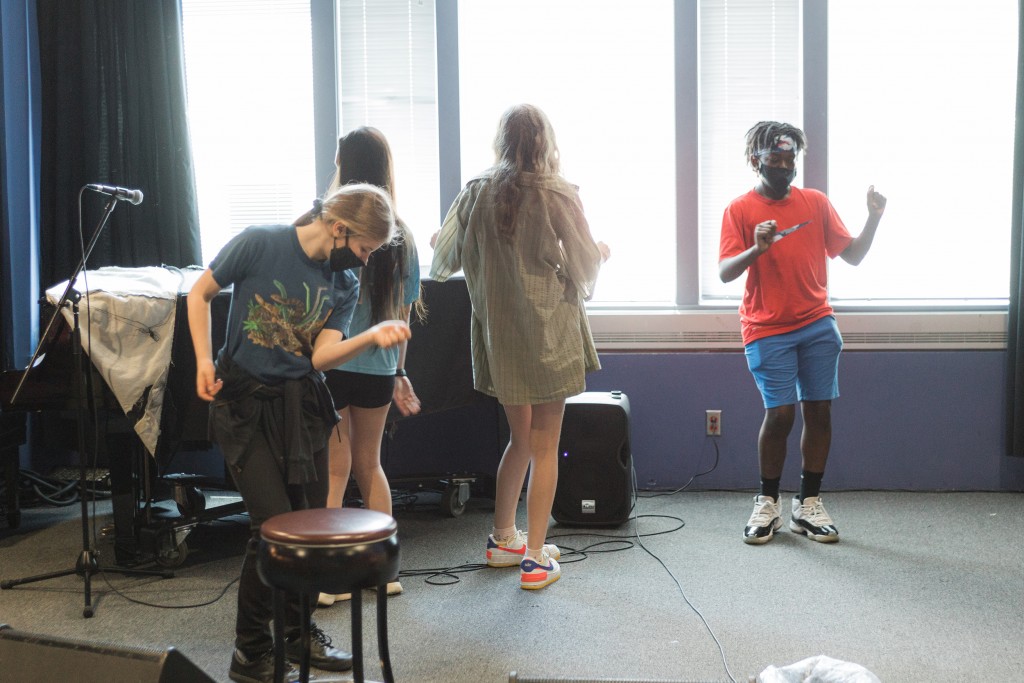 “My name is Aubrie. I’m 13-years-old. And I love to sing,” says one of the Kansas City Jazz Academy’s talented vocalists.

Aubrie is dead-set on being an R&B singer when she grows up. She’s taken the vocal jazz class at the school four times since her dad introduced her to the genre at home. For this summer’s end-of-session concert, she plans on singing an Ariana Grande song and doing a duet with her best friend, Keon.

KCJA is housed at the American Jazz Museum and The Gem Theater on 18th and Vine, rooted in an internationally significant music community. The Academy is the descendant of Kansas City Youth Jazz founded by Leon Brady, the first such group in the area.

“I’m all about self-sufficient artists,” Lisa Henry tells her class on day one.

Miss Lisa, as teachers and students alike refer to her, is an award-winning singer and director of vocal jazz at the Academy. She burst into the rehearsal space with a mile-wide smile, a bag full of everything a good music teacher should carry, and the intention of challenging her singers. 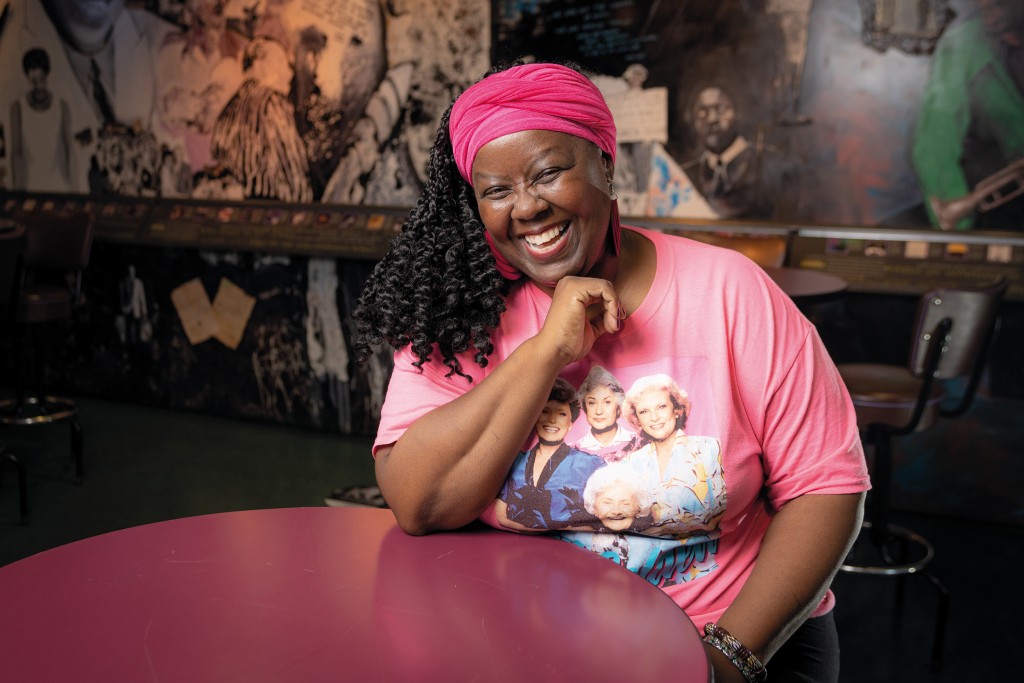 After introductions, she wasted no time. First off was a worksheet testing students’ knowledge of musical notation. Then, the budding singers were tasked with brainstorming their goals for both the summer and their careers.

The singing class rehearses in the Blue Room, the museum’s club which plays host to KC’s thriving jazz scene. On stage, they perform beneath a neon sign that reads, “Believe in: AJM.” Decorating the club’s acrylic tabletops are the names of famous performers and venues.

Clarence Smith, the manager of the Jazz Academy, notes the importance of “the Kansas City sound” to the learning experience.

“All of our teachers at some point focus on what makes the Kansas City sound. [They] talk about the legendary, international jazz musicians that hail from Kansas City: Charlie Parker, Count Basie, Jay McShann, and younger guys like Logan Richardson and Harold O’Neal.”

Defined by the Kansas City Public Library’s online exhibition series, “The Pendergast Years: Kansas City in the Jazz Age and the Great Depression”, the region’s trademark sound was forged at the height of the ’20s and ’30s.

The geography works out for the students, who get to take classes with living legends including O’Neal, “jazz messenger” Bobby Watson, and the current artist in residence, guitarist Will Matthews.

Miss Lisa keeps students apprised of their legacy. She splits classes between rehearsals for the final concert and lectures covering history and performance skills. She details how to tell the crowd stories in between songs, prepare for interviews with the press, and maintain good breath support through it all.

And vocalists are not only learning jazz. Armed with Miss Lisa’s rhyming dictionary, they were given 10 minutes to write raps about themselves and prepare to perform. As they wrote, Miss Lisa talked to them about the entwined histories of jazz, scat, rap, and R&B.

But with intense learning comes pure fun. The room was filled with giggles as often as it was chagrined groans—the true mark of students learning difficult music and life lessons on a June Saturday.

For many young players, it’s the musical community that makes those rehearsal times extra worthwhile. 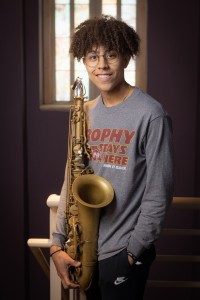 “I’ve only been doing this for a little over half a year,” says Andreas. He’s a rising senior who plays tenor saxophone in the advanced group, dubbed the “18th Street Combo.” He also performs on alto sax in classical groups and is learning the flute.

In addition to John Coltrane, Dexter Gordon, and Sonny Rollins, Andreas lists his peers as his motivation. “Just being up on stage with my friends, playing with them, there’s a huge level of respect and inspiration we all have for each other.”

Attending the Academy in the pandemic meant signing waivers and battling masks around instruments. But for Andreas, the difficulty was well worth the experience.

“I think one of my favorite lessons that I’ve learned is how to play in a group the size [of the 18th Street Combo]. It’s not that I don’t enjoy playing in big bands. But this is a much smaller group, like nine or ten people, and you’ve got to learn how to balance each other, which is not something you think about when you’re just playing in a massive band.”

Andreas is straightforward about his immense passion for his art. “I take jazz and music very seriously. I plan to go to college and do jazz studies. The idea is to get a master’s degree, maybe teach in the future. But obviously, I want to go places and I want to play music.”

Ultimately, jazz affords Andreas something unique: the fluidity of improvisation.

“There’s an incredible amount of freedom. And there’s so much personal interpretation you can use. That’s why everybody sounds different. It’s because they’re their own person. And it doesn’t matter what [you’re] playing. It could be the drums, it could be the bass, sax, trumpet. They’re all different.”

Andreas and the 18th Street Combo, taught by trumpet and flugelhorn player-songwriter Stan Kessler, sounded truly astonishing. Sitting in the audience at The Gem Theater, it was hard not to toe tap, hip swing, and head nod—and it was only their first rehearsal.

Through experimental improvisation, two pages of sheet music became ten minutes of performance. Occasionally, the group would risk falling apart, and Kessler would get out his own trumpet and play along until everyone was back in the groove. 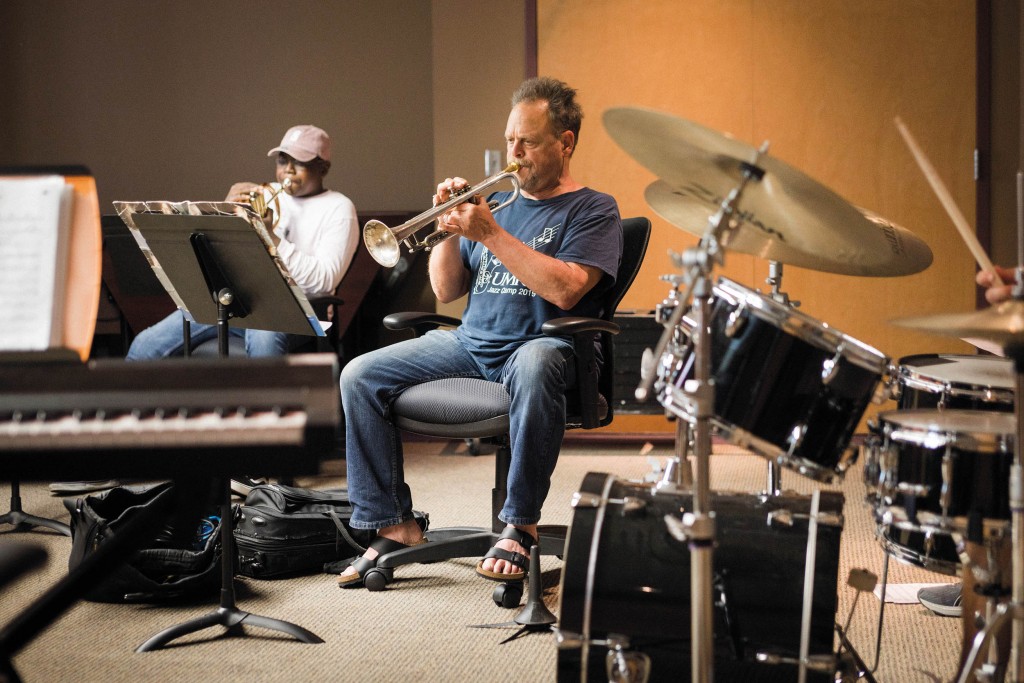 There’s no hiding Smith’s pride in the students. I interviewed Andreas while sitting on the floor in the hallway by the bathrooms—one of the few quiet places in the epicenter of musical chaos. Like an excited parent, Smith snapped pictures of us talking and giving the camera peace signs.

“I’m pleased with a lot of different things about the Academy,” Smith says. “One of the neat things is hearing students progress—no matter what level—but particularly young kids when that light bulb goes on and they finally figure out a concept. And for the older kids, it’s [special] seeing them play on a high level beyond the average high school student.”

Smith and the entire staff are attentive to each student’s needs, and ensure that they receive a hands-on education.

“I try to get [teachers] that I can learn from,” says Smith. “That can demonstrate what they do by standing up and playing, who can relay whatever [information] needs to go to the kids. We have a great staff.” Smith himself is an active drummer and opened up the Blue Room on the eve before the first day of the summer session.

At the Academy, beginners might learn how to poise their hands over the piano keys and push down three notes at once. More advanced musicians are drilled on the nitty-gritty of music theory and their knowledge of scales and chords. They also take an extended tour through different styles of jazz, from swing to Latin, rock, and funk.

“The selection of appropriate literature so the kids can learn [is so important]. They learn what we’ve referred to as jazz standards—thousands of songs that all jazz musicians should know if they’re going to be considered good,” says Smith. “You just have to know these songs.”

The KCJA program is not only fostering the next generation of musicians but is building a wide community of folks who care deeply about jazz. 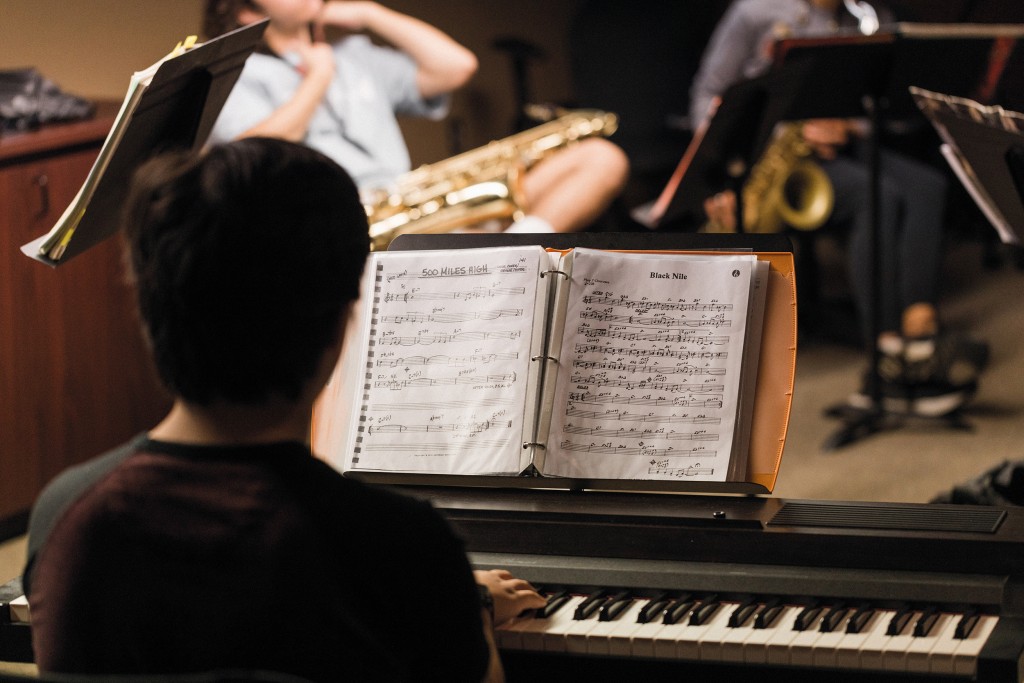 The 18th Street Combo in action. // Photo by Zach Bauman

“I have created relationships with parents that, in some cases, go beyond the Academy,” says Smith. “I have parents that donate money for scholarships. It’s one of those things that tug at your heart, and that motivates me to do the job better in whatever way possible, so we can continue the work that we’re doing.”

Many of the students have maintained long relationships with the staff and their mentors. Abbey, a drummer and vibraphonist in the 18th Street Combo, has been with the Academy since she was in seventh grade. She started in the beginner’s combo, working her way up to the “hard music” now as a rising senior.

Like Andreas, Abbey has a set trajectory for herself. She’s currently putting together a combo outside of the Academy that plays jazz with a little bit of Latin influence. They’ve had their first few rehearsals in the past weeks.

“Right now, my plan is to go to UMKC and do business, but also play in the combos there,” she says. “After I graduate, I’d like to open a record store, and also have concerts. So [the store will be] big enough that people can hear what’s going on around the city.”

The Jazz Academy works hard to uplift outstanding female musicians such as Abbey, who was interviewed in a video celebrating 2019’s Women in Jazz month.

It’s easy to see the exuberant joy born from 18th and Vine’s artistic community when talking to Aubrie, Andreas, and Abbey, or when watching Miss Lisa is on stage with the teenage singers. For one exercise, Miss Lisa played music through the speakers and told them to dance with attention to the rhythm.

The kids were awash in euphoria. Some snapped their fingers, some wiggled their arms in the air, and one was doing the Carlton. “Tito Puente is just rolling over in his grave!” Miss Lisa called out. There was something deeply special about seeing these students dancing side-by-side after a tough year of learning at home.

The kids are young but they’re sticking with it. Abbey will keep jamming as a small business owner creating platforms for the local music community. Andreas is, without a doubt, going to tour the world, make beautiful melodies with his friends, and teach the next generation how he does it. And Aubrie, while younger, isn’t so young that she doesn’t know exactly where she’s going. The day that she drops her first R&B album will be a good one.

Be sure to check out the summer session’s final showcase concert on July 24 at The Gem Theatre, which will be held either online or in person. Best friends Aubrie and Keon will be doing a duet that you shouldn’t miss for the world. 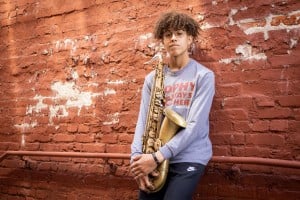 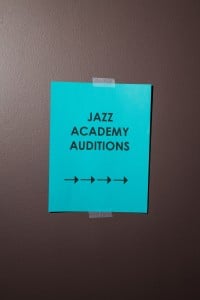 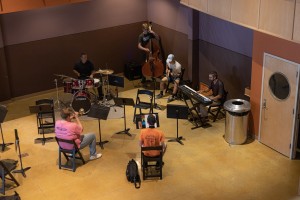 KCJA rehearsals at The Gem Theater. // Photo by Zach Bauman 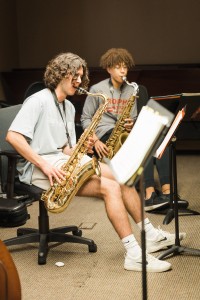 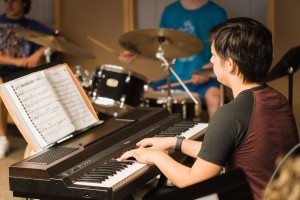 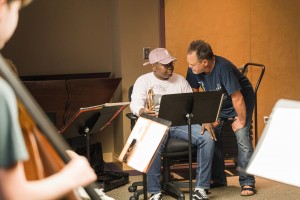 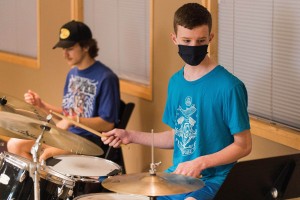 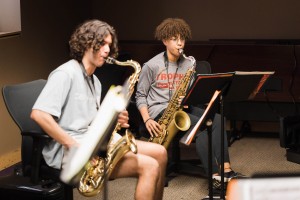 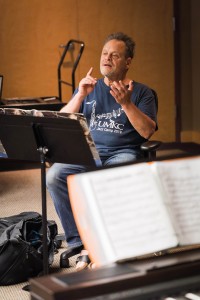 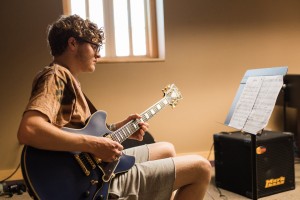 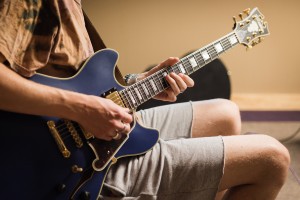 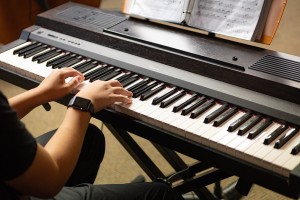 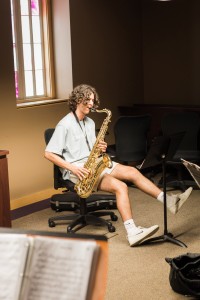 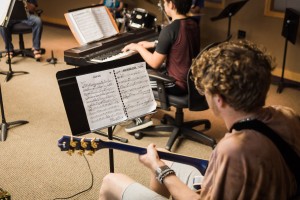 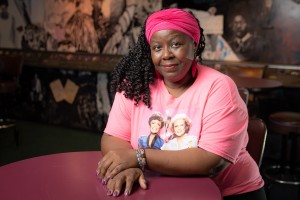 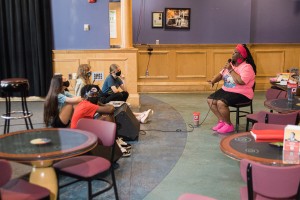 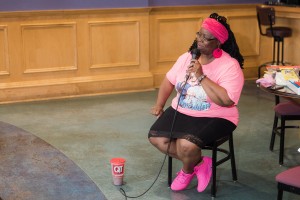 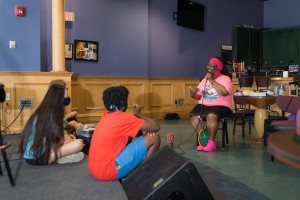 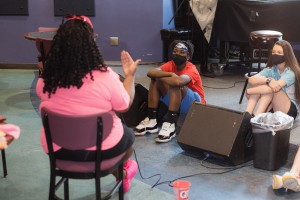