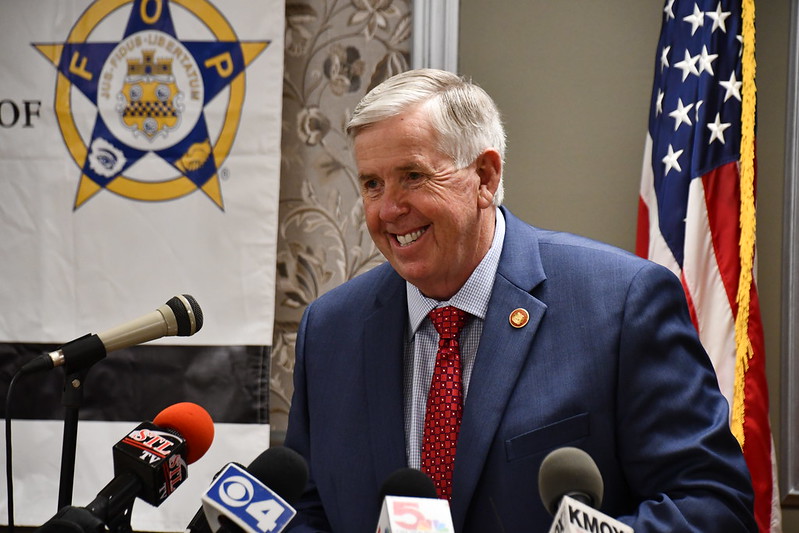 Parson at a bill signing in St. Louis in October 2020. // Courtesy of Missouri Governor’s Office

He became the first Republican in more than three decades to win a second term as governor, winning a landslide victory by nearly 500,000 votes.

And just like his first go round—after he took over following Eric Greitens’ June 2018 resignation—Parson will take the oath of office in January with his party holding super majorities in both legislative chambers.

As he sets off for his first full term in office, Parson faces challenges both unique and commonplace.

COVID-19’s spread across the state shows no signs of slowing, raising fears of overwhelmed hospitals and strained school districts. The long-term impacts on the state’s budget are unclear, and a vaccination campaign the scope of which hasn’t been seen since polio is on the horizon.

While his party controls the General Assembly, every governor faces the reality that the push-and-pull between the legislative and executive branches can often supersede political loyalty.

But Parson also has an electoral mandate that presents an opportunity to leave his mark on the state and define his legacy.

“This is his moment to really figure out what he wants to do to change this state for the better,” said James Harris, a longtime adviser to Parson who previously served in the administration of former Gov. Matt Blunt.

“When he became governor after Eric Grietens resigned, he was thrown into the deep end of the pool,” Harris said. “It was basically, ‘you’re gonna be governor in 72 hours. Bye.’ Now he has time to really sit back and think ‘what are the policy ideas I really want to pursue?’” 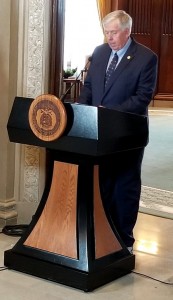 Gov. Mike Parson speaks during Oct. 15, 2020, during a COVID-19 briefing at his Capitol office. // Photo by Rudi Keller/Missouri Independent

Nothing is likely to shape how history remembers Parson’s time as governor more than his handling of the coronavirus pandemic.

New cases and hospitalizations are spiking, and hospital administrators have begun sounding the alarm about worrisome trend lines as the state heads into flu season. One of Missouri’s largest health care providers has cut back on elective procedures to preserve bed space.

Parson declared Missouri “fully open for business” in mid-June when he let the state’s social distancing order expire. Since then, he’s opposed taking statewide actions, such as a mask mandate, arguing that those decisions should be made by local governments.

Last week’s election boosted his resolve that his COVID response strategy is what Missourians prefer.

“I believe (Missourians) believe in a balanced approach,” he told reporters at his weekly press conference. “And we’re going to continue doing that.”

He was even more emphatic on Election Day, telling supporters “I am not going to shut the state of Missouri down. I’ll tell you that right now.”

Parson’s health director, Randall Williams, said last week that with cases and hospitalizations on the rise, the only relief in sight is a coronavirus vaccine.

The Parson administration has put together a 111-page plan to distribute the vaccine when it becomes available, and it will oversee the herculean task of ensuring the vaccine is distributed to the public—starting first with health care workers and high-risk populations.

Beyond the public health responsibilities, COVID-19 will shape the next budget Parson presents to lawmakers.

While budget experts are optimistic about where state revenues will be when lawmakers return to the Capitol in January, they continue to hold their breath.

But while any budget hardships will certainly make life more difficult for the governor, Harris said they can also present opportunities.

“You can really go in and do the types of reforms and rework a program because it’s a bad year that maybe you wouldn’t be able to do during a good year,” he said.

Regardless of the partisan makeup of the legislative and executive branch, squabbles between the 2nd floor of the Capitol (where the governor’s office resides) and the 3rd floor (home to the House and Senate chambers) are inevitable.

Harris said that can even be exacerbated when one party has total control.

The GOP-dominated General Assembly was essentially at war with Greitens, a fellow Republican, nearly from the beginning of his tenure—a situation that nearly resulted in his impeachment.

Parson’s relationship with lawmakers hasn’t been anywhere near as fraught. But it’s certainly had its share of drama.

Among his first acts after taking office was to veto funding for a program aimed at ensuring that critically ill patients suffering from trauma, stroke, and heart attacks get to hospitals that can treat them most effectively.

House leaders were outraged at the move. A few months later the House voted to override the veto, though the Senate declined to follow suit—saving Parson the distinction of becoming only the third governor in 160 years to have a veto overturned by a legislature controlled by his own party.

After a tax calculation error, Parson’s Department of Revenue came under the scrutiny of the House oversight committee. The governor accused legislators of “grandstanding” by holding numerous public hearings on the matter, but eventually, the inquiry led to the department director’s resignation.

This year, the oversight committee trained its focus on allegations of wrongdoing in the state’s fledgling medical marijuana program. Lawmakers questioned top officials in Parson’s department of health and senior services, which oversees the program, about scoring irregularities and rumors of corruption.

The medical marijuana investigation, which eventually expanded into the governor’s inner circle, could start up again after lawmakers reconvene in 2021.

Most recently, Parson ran into issues with the House when GOP leaders rejected most of the governor’s anti-crime legislative package during a recent special session.

In a sign that Parson’s relationship with House leaders has improved since the crime-focused special session, sources close to the governor say he will likely heed House Majority Leader Rob Vescovo’s call to expand the agenda of the current COVID-19 funding special session to include legislation shielding nursing homes, schools and other businesses from liability lawsuits related to the pandemic.

The governor has had a more copacetic relationship with the Senate, though he’s occasionally run into resistance in that chamber as well.

Last year, members of the Senate’s conservative caucus attempted to block Parson’s workforce and economic development agenda with a 27-hour filibuster. The bill was eventually passed and signed by the governor.

The governor and the caucus have had flare-ups occasionally throughout his time in office. But Sen. Bob Onder, a St. Charles County Republican and founding member of the conservative caucus, said that is to be expected.

“We agree with the governor on 95 percent of issues,” Onder said. “We’ve had differences, but those are minor issues compared to where we agree.”

Because of term limits, Parson won’t be able to run again for governor, and most around him say he’s unlikely to seek another office after he leaves the governor’s mansion.

Asked Thursday if not having to appear on the ballot again means he can take risks he otherwise wouldn’t, Parson demurred.

“I don’t know about the risks,” Parson said. “I just try to do a good job every day. I don’t worry about risks too much.”

He promised that he will “be who I am.”

“I’m going to treat people fairly in this state,” he said, “and I want this state to do well. That’s what people want you to do as governor.”