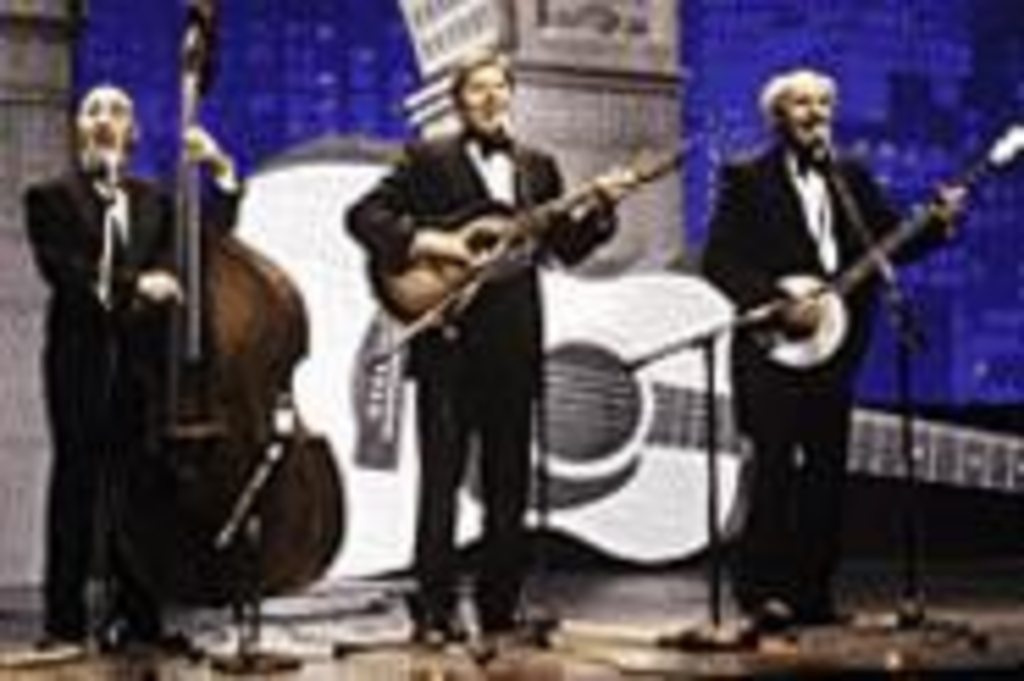 Just to admit this up front, my concept of the ideal musical comedy involves Bryan Adams and Dave Matthews garroting each other onstage with their own guitar strings. Nonetheless, even viewers with a more centrist appreciation of the genre may feel disappointed by this friendly new folk-music curiosity called A Mighty Wind. God love Christopher Guest for being unrelentingly screwy, but this time the director of Waiting for Guffman and Best in Show seems peculiarly tone-deaf in conducting his chorus of yuks.

Very much like David Byrne circa True Stories or the Coen brothers most of the time, Guest loves combing the unruly locks of wigged-out Americana in search of sweetly beguiling freaks. Here, with his trademark combination of detached affection and smug condescension, he employs the device of a reunion concert to corral his folksy loonies center stage. His cozily familiar ensemble cast engenders the same feelings you may experience at an obligatory family reunion: You’re required to love these people, but you don’t have to laugh at their jokes.

Delivered in the pseudodocumentary style of This Is Spinal Tap, Wind introduces us to obsessive-compulsive nebbish Jonathan Steinbloom (Bob Balaban), who’s desperate to honor his recently deceased folk-mogul father with a one-off tribute show featuring his former best and brightest. Rounded up from obscurity or retirement are the Folksmen (Tap members Guest, Harry Shearer and Michael McKean, reassembled as their other pet project), the New Main Street Singers (a cheesy young “neuftet” featuring a shamefully squandered Paul Dooley as the sole original member) and Mitch & Mickey (Eugene Levy and Catherine O’Hara), a heartfelt Sonny & Cher parody minus the parody.

Haven’t these people heard of the Rutles?

The acts rehearse and prepare themselves emotionally for their brief stint at New York’s Town Hall, and iffy improvisation and erratic intercutting ensue. The filmmakers claim to have whittled down somewhere between fifty and eighty hours of raw footage, but the project still feels mostly like a drastically extended outtakes reel — which could explain the absence of any such treat at the end. It’s ridiculous how much time is spent not laughing; I haven’t not laughed this hard since John Cleese turned Clockwise.

Seasoned fans of ’50s and ’60s folk may find a bit more to enjoy, particularly because the faux “archives” of these musicians — the televised performances, the silly album covers — have been produced with the same loving care for period design seen in Spinal Tap. As a hideously bearded Shearer reminisces in one of the movie’s dozen or so funny lines, “To do then now would be retro. To do then then was very nowtro.”

There are a few cute moments with Ed Begley Jr. as a wistful broadcast executive and Fred Willard as a manic manager (the only one here willing to play full-out clown). Special kudos to Larry Miller and Jennifer Coolidge as oblivious yet manipulative PR reps — the closest the movie comes to actual satire. Otherwise, the fun, salty Folksmen appear way too little, and nobody else has enough screen time to steal the show — except Levy, who does manage to pull off his constipated-retard caricature but can’t make us stop wondering why.

As a director, Guest was at his best with his first feature, 1989’s The Big Picture, a delicious valentine to film-school grads and Hollywood shufflers that was still comprehensible even to pop-culture poseurs. That movie somehow balanced heart and whimsy, but those streams have diverged significantly since then. Guest’s ambitious attempt to remarry them in A Mighty Wind foments a woeful wave of self-cancellation; his comic invention ends up hamstrung by his virulent sentimentality and look-at-me preciousness. The songs are actually quite good — if also hideously embarrassing — but these comedians take their roles far too seriously, to their peril and our puzzlement.