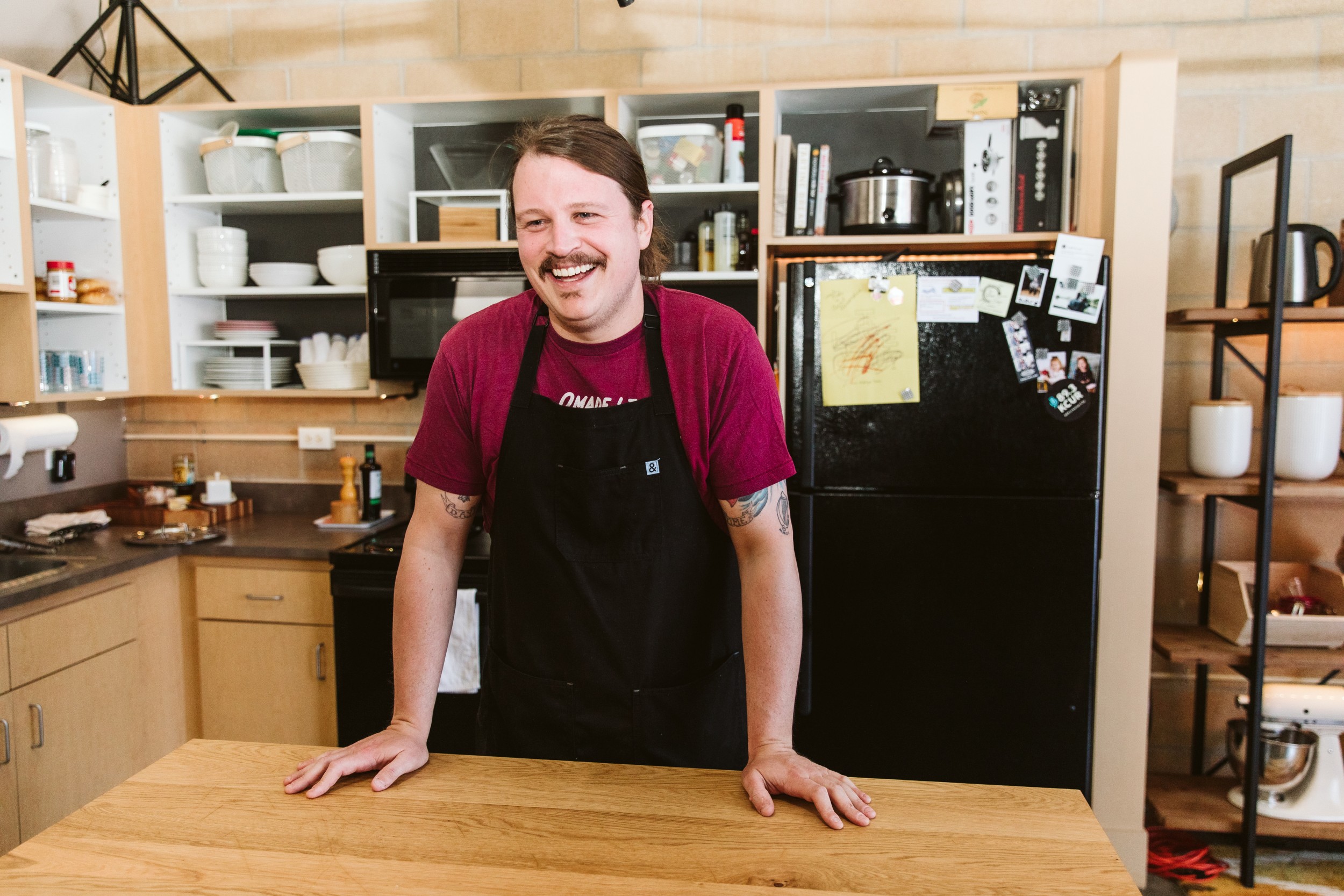 Michael in his kitchen // Photo by Adri Guyer

Kansas City native and local filmmaker, Michael Martin, has taken his quarantine time to pivot his screen-skills to create a fun and tasty distraction from the chaos of day-to-day life. As a self-proclaimed foodie and “full send” kind of guy, he offered us a glimpse into how his YouTube show, The Full Measure, has offered him and his partner respite and a fun hobby during this time.

What inspired you to create The Full Measure? This show was really born from the lockdown. I own a production company and I have 0 client work right now. I had a lot of my equipment just sitting around doing nothing. I also live with some pretty severe anxiety. Years of counseling and taking care of myself have made it very manageable but I knew the lockdown would challenge it. I needed to have a project to keep me busy and my mind focused.

About two years ago, I made a response video to a very popular cooking channel on Youtube and it (somewhat) blew up. Since then, its always been in the back of my mind that I should start a cooking show. That was enough of a spark for me to get to work on an idea for my little lockdown project.

I went for a LONG walk and brainstormed as many ideas for a concept as possible. Due to my counseling and my constant interest in knowing myself, I can admit that I am very obsessive and I tend to pour myself into everything I create. Sometimes to a fault. This includes food. Sometimes this leads me to make an overly-involved dinner and I know there are a lot of people like me out there. Sometimes being that obsessive makes some really great food. Sometimes it doesn’t and you should just cook the easy version.

In a lot of ways, the show is just my thought process about any creative endeavor. I dive in. Deep. In everything I make. The show is a good reminder that sometimes that’s great and other times I’m just being obsessive to be obsessive.

What is one food/dish you are itching to feature on your show? We set a goal at 1,000 YouTube subscribers, which we just passed. We promised to make ramen and that’s what I’m most excited about. We are making every element from scratch. Noodles, Broth. Protein. All of it.I’m also VERY excited about the Half Measure version which will be the 99 cent ramen that we add a bunch of fun ingredients to jazz it up.

Another one that is coming soon is Detroit Style Pizza. A lesser-known pizza style that, honestly, deserves WAY more attention.

Where is dinner (when you can go out to eat again)? We eat too much Tex Mex. Chuy’s on the Plaza is a favorite. We also love Il Lazzarone in the River Market. My favorite lunch spots are The Bite or Poi-ō, both run by my great friend, Carlos Mortera.

Honestly, we eat at home a lot too. Being someone who will purchase a ½” steel plate on the internet just to make better pizza gives me plenty of reason to perfect some home-cooked but restaurant-quality food.

What does Kansas City need more of? Small restaurants. Like physically small. 15 seats. Less maybe. Something that allows chefs to try a concept without the HUGE amount of overhead and risk.

That and more deli counters. I’ve always been someone who is more than happy with a turkey sandwich for lunch.

What has been the most challenging and the most rewarding part of The Full Measure project? The show itself is a lot of work. I run the cameras, audio, lighting as well as cooking everything. Its quite literally just a lot of moving parts but I like the challenge. Alexandria pulls so much weight behind the scenes, as well. She’s ALWAYS on top of helping where she can. She’s a complete novice when it comes to the cameras but she is so brave and jumps in when I need her.

We both do more dishes than we’ve ever done in our entire lives. By a WIDE margin.

The most rewarding thing is EASILY the little community that has begun to form around us. We have complete strangers from the internet making food that they’ve seen us cooking. Twitter, IG, Facebook, Reddit even… People send us pictures and stories about the food they’ve made and Its always so fucking humbling to see that. It makes all the hard work worth it, tenfold.

We’ve also had a lot of family reaching out to support us and cook along. My niece Adalyn, 3 y/o, is a FAITHFUL viewer. She makes my brother turn on “The Uncle Mike Show” every time we post a new episode.

What is your non-cooking related secret talent? I suppose filmmaking. I run TwoSeam Films (www.TwoSeam.com) as my normal non-lockdown job. I’m a commercial director working on a large variety of clients, locally and nationally. I got the chance to direct the Boulevard Wheat and Tank7 TV spots last year and that was a blast.

I’ve also been a musician for most of my life. I play guitar and write a record a lot on my laptop. That’s my go-to to unplug my brain. I’m also a bonafide tinkerer. Electronics. Brewing. Woodworking. I don’t sit still much. Or sleep.

What is your soapbox? “From scratch” isn’t hard. A lot of people think that cooking is this precious thing that needs to be left to the pros. I’m not a pro. I just read a lot. I’m CERTAINLY not a chef. And if any chef watches our show I’m sure they would have 1,000,000 issues and I admit that as much as I can. I’m a filmmaker who makes food on Youtube.

A lesson I’ve learned from the feedback we’ve gotten on the show is that so many people have said ” I didn’t know it could be that easy.” I think some of that Is in the way I present the cooking. There isn’t anything to be afraid of. You might burn something or ruin a dish. That’s cool. Just do it again. That’s kind of how I look at everything in life. Cooking is just one example of that. I learn by failing. Failing is probably the most important part, so why try so hard to avoid it?

What would you tell your younger self?  Stop listening to that voice in your head that says what you’re doing isn’t good enough. That and lighten up. Like, seriously stop taking so much stuff so seriously.

What is your greatest struggle right now? The lockdown has really put my income to $0. That’s been hard. Owning a small business that hires a lot of local film crews also makes me feel awful to not be able to put other people to work. That’s really tough. As it is for every small business and film person right now.

No need to hide the fact that show is my backup plan right now. It’s EXTREMELY possible to make money from making this show. Sponsorships, ad revenue, etc… Once I realized that life might not have any semblance of “normal” for like a year I knew I needed some kind of plan to build another source of income. I hadn’t intended on it being by way of being a “YouTuber” but its honestly starting to gain some steam so there is no reason to stop.

We need more followers. That’s a struggle right now. But one that will take care of itself…