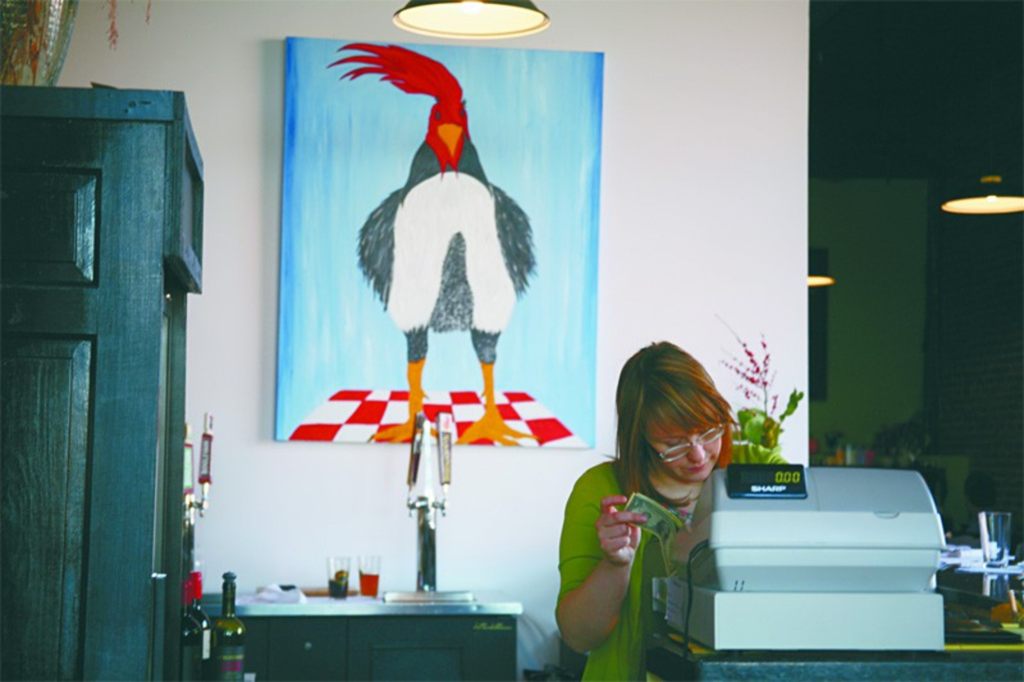 What a difference a year makes. This time last year, a chef named Joe West was serving an ambitious, artistic menu — dishes spattered with flavored foams, fruit paints and carbonated grapes — at 300 Delaware. In the months that followed, West’s restaurant, the Delaware Café, vanished into the same ether that swallowed up other fledgling operations, such as Matchstick Barbeque, Infused Restaurant & Bar, and Mandarinism.

Sure, it was a tough year for restaurants, but the space at 300 Delaware didn’t stay vacant long. Another young chef, Michael Foust, leased the L-shaped storefront in the River Market almost as soon as it became available and reopened it in July as the Farmhouse, serving lunch and Saturday brunch. A few weeks ago, Foust finally added dinner service, too.

“I looked at a couple of locations after I moved back to Kansas City from Oregon,” Foust says, “but I knew I wanted the Delaware location as soon as I saw it. The building has a great, positive energy, and it’s so close to the City Market.”

The proximity to the historic outdoor market was the deciding force for Foust and his chef de cuisine, Zeb Humphrey. Their restaurant is all about comfort food and using local and regional produce, meats and cheeses. It’s nothing pretentious — Foust grimaces at the very idea of culinary novelties such as carbonated grapes — and nothing too country.

I’ve had zero experience with life on a farm, so I’m not sure what an actual farmer’s wife might serve her family, but friends who did grow up on working farms assure me that the dinner table was usually laden with simple food like meatloaf or roast, fresh steamed vegetables and muffins. But Foust, who changes his menu frequently (sometimes daily) is considerably more creative. For example, there’s his idea of the baked pastry — called an empanada, pasty or calzone in other cultures — that has been served as either a savory dish or a dessert since the 18th century. On a recent menu, Foust had a “turnover” made with tender braised rabbit wrapped in layers of buttery phyllo. Any other restaurant might have called the rabbity wrap a kind of spanakopita. At the Farmhouse, it’s a turnover.

Foust, 38, has his reasons. He’s celebrating his Midwest homecoming after culinary school in Portland, Oregon, and kitchen jobs in France and New York City. “I came back to Kansas City two years ago for family reasons,” Foust told me one night. He was standing under a triptych of paintings by his mother, Victoria, depicting three tables of diners in a restaurant. (One of the canvases portrays Foust with a very glamorous ex-girlfriend.) “I’ve decided to stay because I think there’s a lot I can do here.”

He says he wants to educate his diners about what they’re eating, but without proselytizing or boring them to death. He’s not a vegetarian, but he offers at least one vegan starter and entrée on every menu. This is exactly the kind of menu that usually scares off my friend Bob, an unfussy meat-and-potatoes kind of guy. Bob wasn’t sure about what kind of food a place called the Farmhouse might serve — it sounds like a place with pan-fried chicken and apple cobbler — so he called the restaurant. Foust answered the phone.

“He patiently described almost every dish and all the ingredients,” Bob reported. “And by the end of the conversation, I was ravenous.”

Bob and Kimberlee joined me for dinner at the Farmhouse that evening, and we shared a superb charcuterie plate with paper-thin slices of La Quercia Prosciutto and Speck, a robust country pâte, house-pickled vegetables, boiled eggs and crunchy toast points. Well, Bob and I shared the meats because Kimberlee only eats fish or chicken. She chose fat squares of ravioli, stuffed with roasted pumpkin purée and drizzled with brown butter, a succulent port reduction and crumbles of dried sage. I took one for myself, and it was heavenly. And the French onion soup? I all but licked the bowl clean.

The menu selection was small, but that night’s selection of “large plates” featured a nice hunk of striped bass on a bed of French green lentils dotted with roasted beets, capers (too many of those vinegary little buds, actually) and turnips. Kimberlee loved it. Bob, meanwhile, chose the quail — rarely found on most modern menus — and found it tasty but awkward to eat because of the bird’s daintiness. Foust fills his quail with fresh herbs, Green Dirt Farm sheep’s-milk cheese and black walnuts.

As a lamb lover, I was seduced by Foust’s duet of dishes: two perfectly grilled, sumptuous chops and a good-sized bowl of the finest lamb stew, made of shanks braised with lemons and oranges and served with white beans slow-cooked in lamb stock.

For dessert, we sampled the trio of house-made ice creams: a fragrant rosemary, a mild fresh pear and a chocolate-juniper creation that didn’t have a hint of juniper. “We’re still experimenting with that one,” Foust admitted.

I returned for another dinner with my friend Zoe, a vegetarian who once ran her own restaurant. She fell in love with the Farmhouse after her first bite of Foust’s chickpea fritters: puffy fried squares, as light as marshmallows, splashed with a green garlic aïoli and sided with a marvelous “salad” of tart-apple slivers speckled with bits of fiery, smoked peppers. “It plays with all the taste senses,” Zoe said. “Tart, sweet, hot, soft, crunchy. It’s wonderful.”

The cheese plate seemed somewhat modest for the price, but the little bites were all of superb quality — a brassy Vermont white cheddar; Green Dirt Farm’s nutty Prairie Tomme; a punchy blue; and a triple-cream brie — and were served with a supple fresh-cherry compote.

That night’s vegan meal was as beautiful as it was delicious, a seared polenta cake draped with ruby-colored red-onion gastrique and sided with meaty smoked mushrooms and a dollop of braised kale and mustard greens. “It’s a magnificent vegetarian meal,” Zoe said. “The flavors just pop.”

I could say the same about the finest pork osso buco I’ve had this year: a gorgeously tender, slow-simmered shank and fork-tender pork cheeks with root vegetables, olives and an addictive herb Spaetzle. It’s not on the Farmhouse menu every night, but on these frosty winter evenings, it should be.

A tiny pear tart, warm and soothing, was served with a little scoop of that rosemary ice cream, and Zoe all but cooed over it. “As good as sex,” she said, “a first-class dinner all the way.”

Adding to the experience was the first-class service: Foust has wisely hired some of this town’s most articulate, polished servers, including Tim McCoy, who is as knowledgeable about fine wine as he is about the art of cooking, and former actress Brenda Nelson.

“Hey, we’re not perfect yet,” Foust told me later. “This place is just evolving at its own pace; that’s why I waited to start serving dinners when our kitchen and staff were ready. Now I just need to let people know that we’re here.”

He shouldn’t have to worry about that much longer.