Miami Creek Brewing Company brings the farm to your glass, plus the week’s beer events 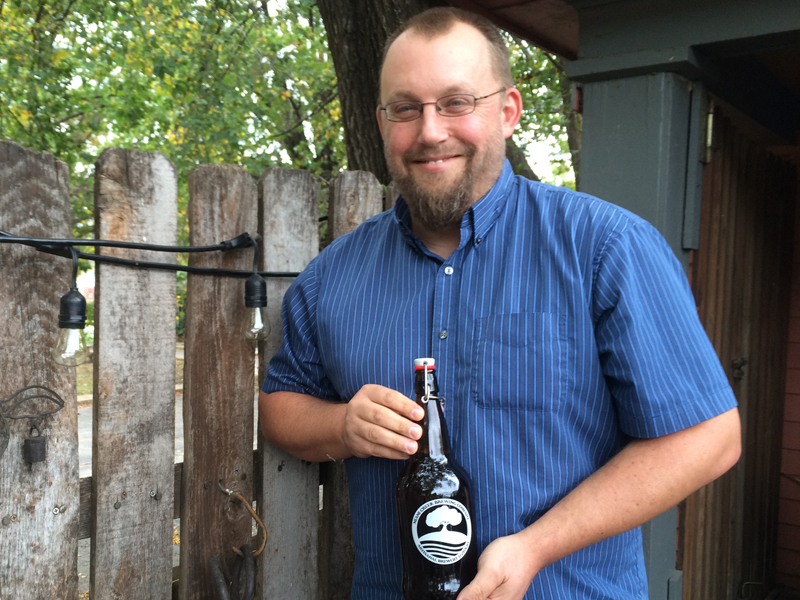 Turkeys meander beside a burbling creek, and blackberry bushes flourish outside a former woodshop. Life is a little different at the metro’s latest brewery — in Drexel, Missouri.

“We’re like a farm winery, just with beer,” says Will Reece, who co-owns the Miami Creek Brewing Company with his wife, Chrissy. “The idea is that we can plant stuff, be able to use it in our beer, and offer people something they might not be able to get elsewhere.”

Reece grew up in Grandview, where his father turned the Concord grapes he’d planted along the back fence into homemade wine. (Reece remembers helping out with the stomping when he was 5 or 6 years old.) His dad, an avid gardener, experimented with cherry-bush wine and homebrew in swing-top bottles (the inspiration for Miami Creek’s growlers). 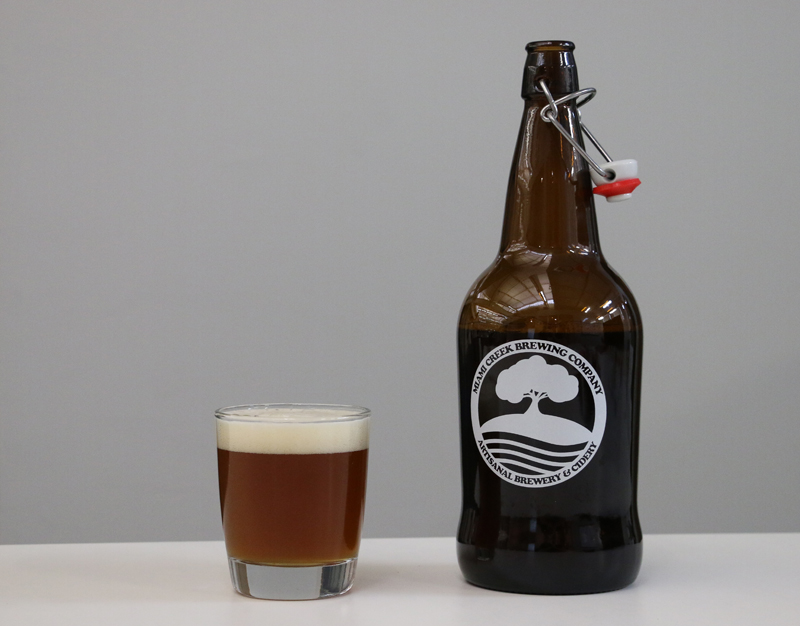 An IT engineer for the past two decades, Reece wanted to get out of the office and back to the land. In 2011, he and Chrissy found this 10-acre property in Drexel and fell in love. They converted a tiny garage into a cabin and started raising rabbits, chickens and goats. Reece roasted and sold coffee at the farmers market in Paola, Kansas, under the name Miami Creek, a nod to the mini waterway visible from his kitchen window.

“A desire for clean food brought us out here,” Reece says. “It grew into roasting and selling coffee, and then I realized that I missed brewing.”

Three years later, the property across the street became available. It had a larger house and three other buildings on the grounds. Reece saw the woodshop, with its concrete floor and pair of wood stoves, and recognized the future home of his brewery.

Together with brewing partner Carl Jacobus, Reece began experimenting, using a 25-gallon system to make a Kona coffee stout and a pale ale brewed with Cooper’s honey. Reece began the permit process and had a seven-barrel system (with the potential to attach a still in the future) installed.

“We didn’t have anybody telling us what we had to brew or what we have to bring to market,” Reece says.

Over the past year, he has taken Miami Creek to a half-dozen area beer festivals, surprising drinkers with brews such as Blackberry Barleywine, an American barleywine (about 12 percent ABV) fermented on top of blackberries grown at home.

“Developing a recipe is a fine art,” Reece says. “Adding ingredients from our place is what makes it personal. I know how to brew the base recipe, but adding that unknown part is exciting to me. I don’t always necessarily know what’s going to come out.”  Case in point: an ale made with a trio of hot peppers — smoked serrano, chipotle and habanero — and combined with smoked malt for a brew that packs healthy heat into the finish.

The pepper ale, along with the Nutty Belgian — a Belgian tripel brewed with black-walnut syrup in lieu of candied sugar — will be among the seven beers on tap for Miami Creek’s grand opening, from noon to 8 p.m. on Sunday, October 30.

Reece has also been experimenting with herbs. He has used lemon thyme in a saison, but his latest batch, made with bravo and Willamette hops, was fermented on lavender.

“People either love lavender or hate it, but I wanted it to be detectable,” he explains. “I happen to love it, so there’s a good amount in there.”

He intends to make the honey pale ale, the coffee stout and — maybe — the Nutty Belgian year round, eventually distributing them to local taprooms. The other brews, such as a bush-cherry saison, will remain exclusive to the Drexel homebase.

“Having local ingredients is important to me, even if it means that we might only have limited batches,” he says.

Miami Creek Brewing Company could go in a lot of directions, in part because Reece is still discovering things about the property. While recently mowing a neglected area, he uncovered wild hops vines. He says he has asked the Louisburg Nursery and Greenhouse to propagate the hops, with an eye toward one day brewing a beer made exclusively from Missouri or Kansas ingredients.

Meanwhile, he has planted several hundred apple, nectarine and peach trees over the past few years. Some of the resulting fruit is now in a harvest-apple ale, with equal parts barley and cider juice (as well as Citra hops and cinnamon, nutmeg and clove), though a steady supply of cider is likely a few years away. Reece is also compiling a long list of potential brews to take advantage of what’s growing on the farm: a chocolate-centered imperial stout that could benefit from wild mint, a black IPA for his rosemary, a scotch ale for the walnuts.

It’s all part of an unhurried plan — which, in Drexel, is the point.

“We’re out of the way,” Reece says. “We want to give people the time to walk around. See the blackberries and the little farm plot that we have, and then have a beer.”

Whether you’re trying to forget about playoff baseball or simply looking to add an extra layer of insulation for winter, you’re in luck: The winter warmers have arrived for the start of the barrel-aged season.

For one thing, Boulevard Brewing Company’s Snow & Tell — an oak-aged scotch ale (6.3 percent ABV) built for lovers of toffee and with a bottle reminiscent of Christmas sweaters — is out. And then there’s the Thrillogy, a triple-threat case of Smokestack Series 750ml brews that includes Rye-on-Rye (unavailable elsewhere), Imperial Stout and Bourbon Barrel Quad. A better name for the set might be the Stay-at-Home Parent, because once you crack any of the these, you’re not going anywhere.

Want more? Ballast Point’s Mocha Marlin, an English-style porter with cocoa and coffee, is out in Kansas and Missouri this week. Victory at Sea, a coffee vanilla porter, is out in six-packs and drafts, too.

Wizards 21 or older, unite. The Bar (6101 Johnson Drive, Mission) is hosting a Deschutes Harry Potter Trivia night. Six brews from the Oregon brewery will be on tap for the three rounds of play (know your books and your movies), with prizes for the top three teams and the best costume (two words: lightning bolt). The action starts at 6 p.m., and the beers include Sagefight IPA (a sage and juniper berry–infused imperial IPA) and Pinot Suave (a pinot barrel–aged Belgian dark ale).

Torn Label Brewing Co. (1708 Campbell) debuts a pair of Rough Draught beers with Halloween in mind: Young Dankenstein (pitched with Vermont IPA yeast and hopped with Citra and Simcoe, among others) goes on tap alongside Red Right Hand (a golden ale with tomato juice and peppers — think Michelada). And Friday night, you get a s’mores-inspired brew made from an altbier base. In other Torn Label news: Quadjillo (the brewery’s Belgian quad, made with guajillo chiles) is back on tap in the tasting room and should be back in bottles next week.

Big Rip Brewing Company (216 East Ninth Avenue, North Kansas City) is hosting its fourth annual Ripper Halloween Party from 7 p.m. to midnight. Which means a costume contest, a DJ — and Aisle 12 West Coast IPA, with mango juice. Keep an eye out for the Pennywise Sweet Tater ale, too, if it’s still on tap. Tickets cost $60, which includes dinner, snacks and all of your drinks (beer, wine and cocktails).

The concept of the ice creams social gets a hip makeover at Boulevard Beer Hall (2534 Madison). As part of the company’s Monthly Maker series, Glace’s Christopher Elbow is here for a three-course tasting that features a Tropical Pale Ale sundae, a Ginger Lemon Radler sorbet, and a float made with the Calling and a mini stout–chocolate dipped ice cream bar. Oh, and if you wear a costume here today, you get a full pour. Tickets cost $12 in advance or $15 at the door.

Feeling almost brave? Tapcade (1701 McGee) takes you back in time with a couple episodes of Are You Afraid of the Dark? from 7 to 10 p.m. Steel yourself with a firkin of Cinder Block Brewery’s Pavers Porter.

More happy hour is never a bad thing, especially at Bluestem (900 Westport Road), which now starts happy hour at 4 p.m. Tuesday through Friday — with $4 Boulevard bottles among the specials.

Double Shift Brewing marks All Soul’s Day with a release party for Bring Out Your Dead: a blonde coffee stout clocking in at 6 percent ABV, brewed with lactose, vanilla bean, cacao nibs and coffee.