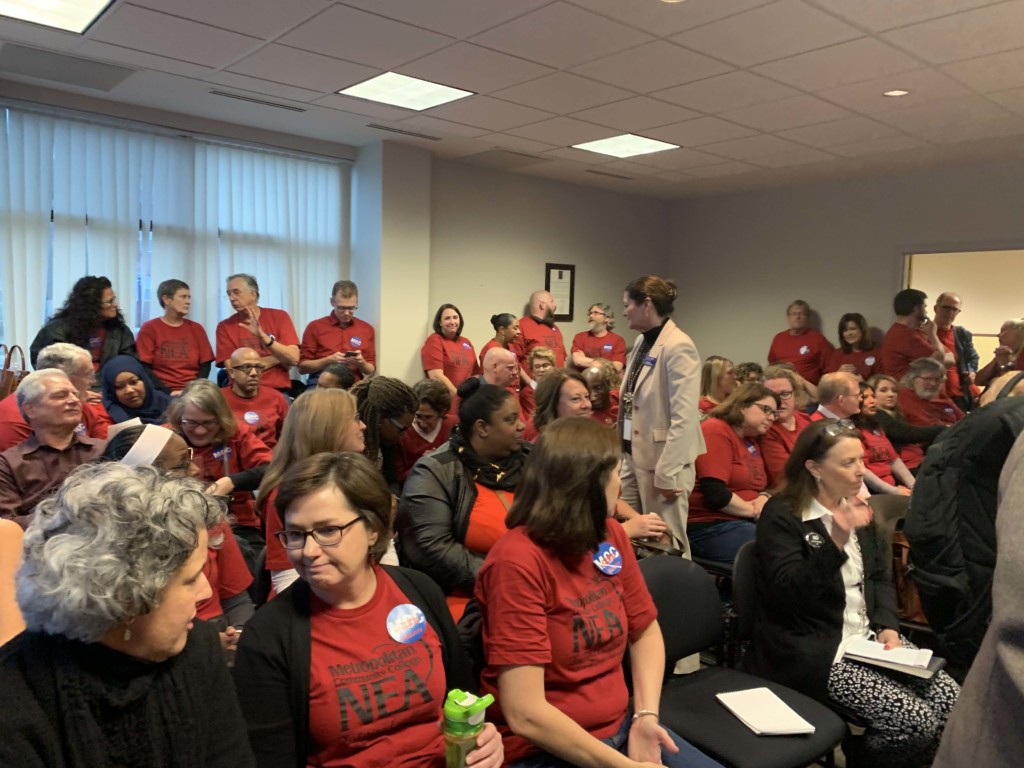 Metropolitan Community College’s Administration Center was a sea of red last Thursday night, when over a hundred T-shirt-wearing members of MCC-NEA—the college’s faculty union—squeezed into the boardroom and spilled out into the hallways for the monthly Board of Trustees meeting. For the first time in MCC’s history, the board appeared to be on the verge of voting to impose a compensation contract the faculty had not agreed to.

Faculty hadn’t agreed to the new contract because a 2017 study by an independent consulting firm found that faculty compensation at MCC was below the 25th percentile in the market.

Negotiations followed. Faculty union members requested that the college match the market median salary identified in the 2017 study, which would amount to an approximately 12 percent increase across the board. The increase would equate to 0.55 percent of the community college’s general fund budget.

But MCC-NEA negotiations chair Gretchen Blythe and Hossein Bahmaie, an economics instructor who’s also on the MCC-NEA’s negotiations team, tell The Pitch they were repeatedly told by administrators, including MCC Chancellor Kimberly Beatty, that there wasn’t enough money in the budget to give faculty the salary raise they requested.

“The administration has worked hard to recognize the MCC-NEA’s collective bargaining proposal, given the college resources available,” Beatty said in a statement. “MCC values the contributions of all faculty, staff, and administrators in pursuit of our mission, ‘Preparing, Students, Serving Communities, Creating Opportunities.’”

Beatty declined The Pitch’s request for further comment, but the contract she recommended to the board included a 3 percent salary equity adjustment and a 1.3 percent salary increase each year through 2022.

“You are talking to an economist, and you are going to say that we are going to be comparable to 2017 salaries by 2022?” Bahmaie says. “Meanwhile, inflation has been zero? And those salaries all remain constant? And so finally, they say, we have caught up to the median of the market. That is such an insulting argument.”

Bahmaie also points out that, between 2016-2018, there was a surplus in the budget ranging between $11.5 and $13.6 million each year; in 2019, the surplus is projected at $12 million. He adds that, in his own research of the college’s administrative salaries, he’s discovered administrators are making within the median market range of college administrator salaries.

After months of negotiations between the MCC-NEA and MCC’s administration, Thursday’s board meeting was the faculty’s last chance to plead its case before the final vote on compensation contracts.

“We are dismayed, truly dismayed, that what is a very reasonable proposal has been spun as unreasonable and regressive when that is simply not true,” Blythe told the board. “We do not wish for our students to live below the 25th percentile. We strive to help them attain degrees and certificates so they can earn a median salary. And I would ask you, Is it the belief of the board that we be a 25th percentile institution?”

Evidently so. After hearing from faculty one last time, the board voted in favor of the contract.

Trent Skaggs, the president of MCC’s Board of Trustees tells The Pitch he thinks the compensation contract is fair.

“A five percent increase is what we were able to do,” Skaggs says. “There’s not many government entities that are giving out five percent increases at the same time that enrollment is declining and state funding is decreasing. So, from our standpoint, we felt like we were fairly generous.”

Skaggs points out that, under the new contract, the college will pick up the 2.6 percent tax for the health insurance plan and provide a one-time payment to offset the increase in insurance of $500. He says the culmination of all of the compensation package will put the faculty at or above the 50th percentile.

Skaggs also says that MCC-NEA’s negotiators cherrypicked which parts of the data from the 2017 study to present. While the study identified that the faculty salaries fell below the 25th percentile, it also identified areas that MCC was ahead of the market: employer contribution to the most popular medical, dental, and vision plan; annual employee out-of-pocket maximum for medical cost; sick day carry over; and employer contribution to the Defined Benefit Plan.

But when The Pitch obtained a copy of the study, it identified that MCC was only ahead of the market for one of its insurance plans, while the three others were behind the market. The study also identified other areas in which MCC fell behind: annual sick days for faculty; total holiday/personal/bereavement days per year; rate of pay for retirees who continue/return to teach; base salary for faculty across all levels; and salary ranges for faculty across all levels.

The board’s decision to impose the contract left many faculty members shocked.

Keet Kopecky, a biology instructor who’s taught at MCC for over 40 years, was on the salary negotiating committee back in the 1990s, another period during which the board had requested an equity study and learned that faculty salaries were below market rates. Kopecky remembers that, back then, the board was mortified and immediately adjusted faculty salaries to meet the median market rate.

“I respect everybody here, so, I guess it’s more deep surprise—even more than deep disappointment—that they’re taking the stand that they are,” Kopecky says. “It’s so different than the way MCC leadership has been for the past 35 years.”

Blythe, Bahmaie, and MCC-NEA President Todd Geringer say that the union is in the process of identifying what actions they might take in response to the board’s decision. After the vote, the board meeting was adjourned and the faculty gathered together in the back of the room.

“I hope nobody leaves here deflated tonight,” Bahmaie told the group. “We should keep our spirits up and continue the fighting momentum that we have. I hope that what we were hoping to prevent is still doable. I just want for people to keep in mind that if it is imposed, it really is not a contract, it’s not negotiated. Once they can just impose it, it sets a very, very bad precedent, and we have to continue our fight.”

“This is just the beginning,” another shouted out.