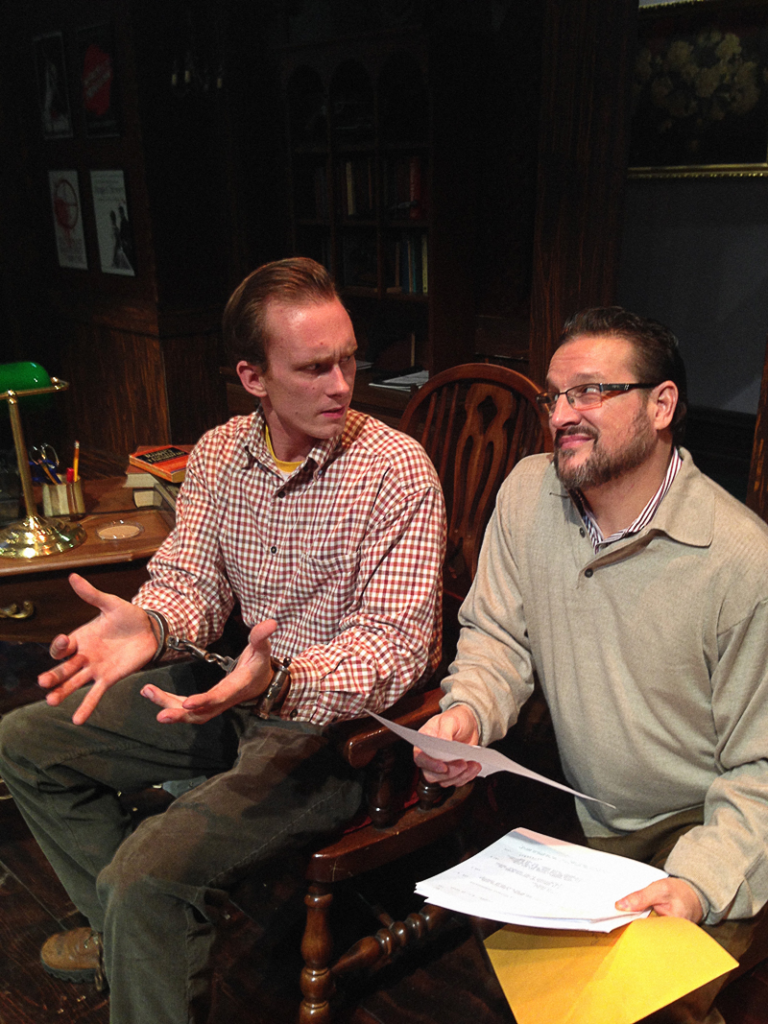 For a time, I couldn’t get enough of Ira Levin — his novels Rosemary’s Baby and The Stepford Wives, to name a couple. Creepy. But his play Deathtrap, often revived and now onstage at Metropolitan Ensemble Theatre, is a departure from the frightening scenarios of his best fiction. It’s a comedic, cleverly composed, self-referential thriller that keeps us guessing.

The play seems to create itself as it unfolds. Written in 1978, Deathtrap — nominated for a Tony Award — ran on Broadway for four years. With allusions to Angel Street and parallels to Sleuth, it goes the direction of parody, using some of the genre’s critical parts: a country manor, melodrama, underlying menace, a storm, a detective (here, a psychic), a strong incentive to commit crime. Also, of course, plot twists: Just when you think Deathtrap is going one direction, it turns and goes another. And another.

The right balance of subtlety, exaggeration and pacing makes a script like this sing. The MET production, directed by Linda Ade Brand, instead hums, veering from amateurish moments to a more clockwork precision. Is it enjoyable anyway? Yes.

Timing, of course, is critical to a show like this, as is the casting. The first act, at 75-80 minutes the night I attended, had me thinking it was a one-act play. (It’s not.) And an extended transition between the first and second scenes had the appearance of an unplanned delay. But actors Craig Benton and Connor Eastman, in lead roles, are spot-on, lending Levin’s work its footing and its tone.

The play begins harmlessly enough, in the parlor, so to speak, of a country house in Westport, Connecticut. (Karen Paisley’s set design is striking, with wood paneling, wood floor, stone fireplace, French doors, and an upstage entry hall and stairs.) The occupants are clearly genteel. But a first impression is only that. Playwright Sidney Bruhl (Benton) hasn’t had a hit play in 18 years. “Nothing recedes like success,” he says. His wife, Myra (Paisley), the monied half of the partnership, acts the supportive spouse, but what Sidney needs is a good idea to free himself of writer’s block.

It comes in the mail. Clifford Anderson (Eastman), a student from one of Sidney’s seminars, has sent him a script — titled Deathtrap. Clifford seeks feedback, but Sidney sees that this “draft” is a compelling, polished piece. And he’s jealous. He devises a plan to get Clifford to the house for a working session and, perhaps, a collaboration.

Or is that merely pretense? Sidney also asks Clifford to bring all his notes and any copies he has made. Married to Sidney for 11 years, Myra appears to have reason for concern. (And Sidney’s preoccupation with weapons from his popular thrillers, on display around the room, doesn’t assuage her growing panic.) When an innocent-appearing Clifford arrives, she refuses to leave the two alone.

That’s just the springboard of Levin’s multilayered plot. Any further description would just ruin its surprises. Suffice it to say the audience may well have gasped at one of its turns. (Hard to know for sure, being one of that crowd.)

As Sidney, Benton is seamless in his portrayal of a seemingly staid former success and a scheming, unpredictable writer. And as Clifford, Eastman perfectly blends both boyishness and cunning. Together, they anchor the show and rivet our attention with skilled and easeful performances. And Kevin Albert, as Sidney’s lawyer, Porter Milgrim, does good work in a small supporting role.

While Paisley has proved to be an able director, she has sometimes appeared unnatural on the stage, and here, her performance is forced and distracting. Part of the problem is her character’s peripatetic blocking — Myra’s continuous movement and fidgeting in Act 1 don’t appear character-based. But Paisley also missed cues and had premature (and delayed) reactions.

Adding to the comedy and the plot: Helga ten Dorp (Michelle Stelting), a Dutch psychic taking a respite from the Netherlands in a neighboring house. Helga’s ESP is remarkably facile, though Stelting’s accent is not. In her portrayal, the character is more annoyance than flamboyant comic relief, thanks in part to the thick, perhaps Eastern European, un-Dutch voice she has chosen.

Imperfections aside, Levin’s script is a joy all its own and makes for engaging theater. Its 1970s setting offers amusing references to things that have passed into history: the Amazing Kreskin, The Merv Griffin Show, manual typewriters. And while some predictability eventually seeps in, that’s just because we’ve been paying attention, and maybe starting to think like the characters onstage. Which is part of the fun — and the tension — of this play within a play within a play.