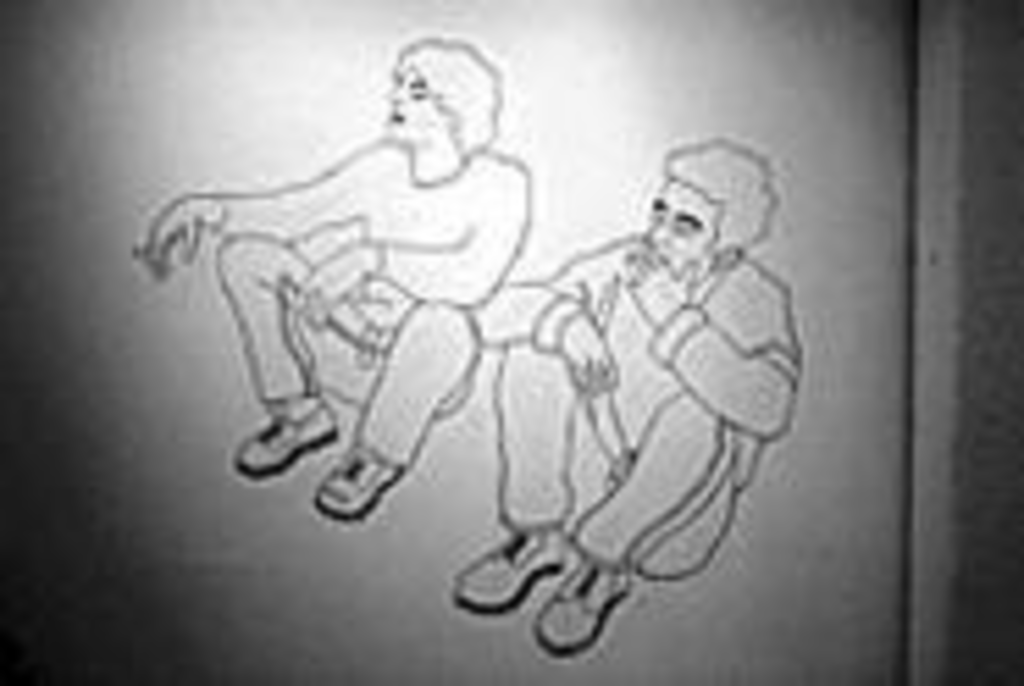 The purpose of blinders is to keep the horse from getting distracted by the shit alongside the road. The horse looks straight ahead and continues on its plodding way without being spooked. It reaches its destination. Eats oats. Falls asleep standing up. Even if the horse could talk, it couldn’t tell you the truth of where it had been.

People are more clever. They don’t need blinders. They can fix their eyes on miles of roadside waste and never see it. They can drive through a moribund neighborhood and never recall it. They can stare at their own kid’s cuts and scars and pretend they’re not there. Ask them to describe their journey and they’re likely to say it’s a road with white lines. But that ignores what lies beyond the periphery: the noise and silence and violence and sweetness and unpromising minutiae that make up our brief, shining existence.

The Pink Heart That Only Held Love is a 360-degree view of the peripheral world, inside and out. The installation of wall drawings by Lindsay Barras and photographs by Jaimie Warren, at Opie Gallery, is remarkable for many reasons but primarily for its ability to evoke a sense of nostalgia for fragments of life that vanish from memory as soon as they’re lived, fragments that didn’t seem important enough to retain but, in hindsight, were as much a part of existence as the grander moments. This nostalgic response is likely skewed by age; Barras and Warren are young artists (twenty-something seniors at the Kansas City Art Institute) who say they are “contemplating our own experiences and relationships with people our age and how they view their surroundings.” Nostalgia, for them, has a far shorter distance to travel; it’s less desperate upon its arrival.

This is an ambitious project, exploring issues of public and private personas and assimilation. If it falls slightly short of these goals, it exceeds expectations elsewhere.

Warren’s photographs look like grainy snapshots taken carelessly, recording slivers of a bigger story that the viewer can only imagine. Pictures are unframed and nailed flat to the gallery walls singly or in groups. Scale ranges from poster-size to Polaroid-size, though some of the smaller works seem vast in their psychological content while larger works maintain an intimacy. In one duet, a top photo depicts the back wall of a small grocery store hung with stuffed wild turkeys above shelves stocked with pancake mix and syrup, salad dressing, breath mints and potato chips. Juxtaposed beneath is a photo of four youths partying in a stark white bedroom. One boy has thrust his head out a window, presumably vomiting. The other kids seem merely bemused — perhaps a bit grossed out — by his plight. Though they wear the heavy-metal black clothing of rebellious teens, the residue of innocence remains, witnessed by a bowl of Lucky Charms cereal in one boy’s hand, a stuffed monkey on the bed and window blinds hung with action figures still in their packages.

Barras responded to Warren’s photographs by drawing linear images directly onto the gallery walls. The drawings maintain the simplicity of clip art or stylized tracings from cheap holiday cards from which imperfections have been removed: a life-size Christmas tree, for example, takes up a short wall just around the corner from Warren’s photo duet. The tree is replete with perfectly placed candy canes and ornaments; two tidy gifts are displayed under the tree’s flawless branches. According to Barras, the simplicity of her line drawings is “point-blank, and can be read easily by the public as a sign or diagram, or perhaps an instructional tool.”

The same is true for the empty wall space. Physical gaps between images become gaps for creating narrative in the viewer’s mind. Narrative, after all, is an accumulation of disparate ideas, and the viewer will attempt to create narrative regardless of relationships between the bits of information provided. In other words, Barras’ graphic interpretation of Warren’s photographs takes second priority to the viewer’s interpretation of both. This aggregate, according to the artists, “recognizes the space that people place between one another, the curiosity that different lifestyles evoke and the meaning behind the ‘persona.'” They ask viewers to “think before they judge.”

Without the artists’ statement supplying insight into their intention, however, it’s doubtful they’d achieve their lofty aims. There are no labels providing titles or artists’ names to distinguish who did what — an aesthetic decision to transform the gallery space into one that is “comfortable, like a bedroom…. The overall feeling is warm and familiar, not sterile and pristine.” Even the schmaltzy exhibition title is an enigma, though words like “pink heart” and “love” written on the wall in an ornamental text conjure schoolgirl memories of lovelorn notebook doodles and bedroom walls covered with handmade drawings and movie-idol posters torn from Teen magazine.

In fact, memory plays an important role in the installation’s success. Warren captures a moment as brief as the click of a camera. A girl in a wet T-shirt writhes on the floor in the middle of a circle of young men and women shot from the neck down; below this, a marina on a sunny day, not a person in sight; below this, a privacy fence along a street spray-painted in black with “5:20”; below this, and side-by-side, the top of a blooming cherry tree in front of a corner of a suburban house and a girl in front of an industrial landscape getting ready to toss a neon-red ball. These are scraps of tales that the viewer invents out of his or her own warehouse of memories — just as Barras invents her odd interpretation of Warren’s photos: three deer graze on the white wall, for example, the buck staring across the gallery at two large groupings of unrelated images.

The most interesting phenomenon occurs after leaving the installation. The images coalesce in the memory, reordering themselves not according to the designs of the artists but to the whim of the viewer. Barras’ deer are not next to those photographs, but these. Warren’s photograph of water is here, not there. The mind sorts and reorganizes the images in the same way it reorders the past. And the wealth of visual information provided by the show resurrects — at least for this viewer — long-buried memories of the peculiar, the inelegant, the forgotten alongside a long, winding road. They’re more significant than I remembered.